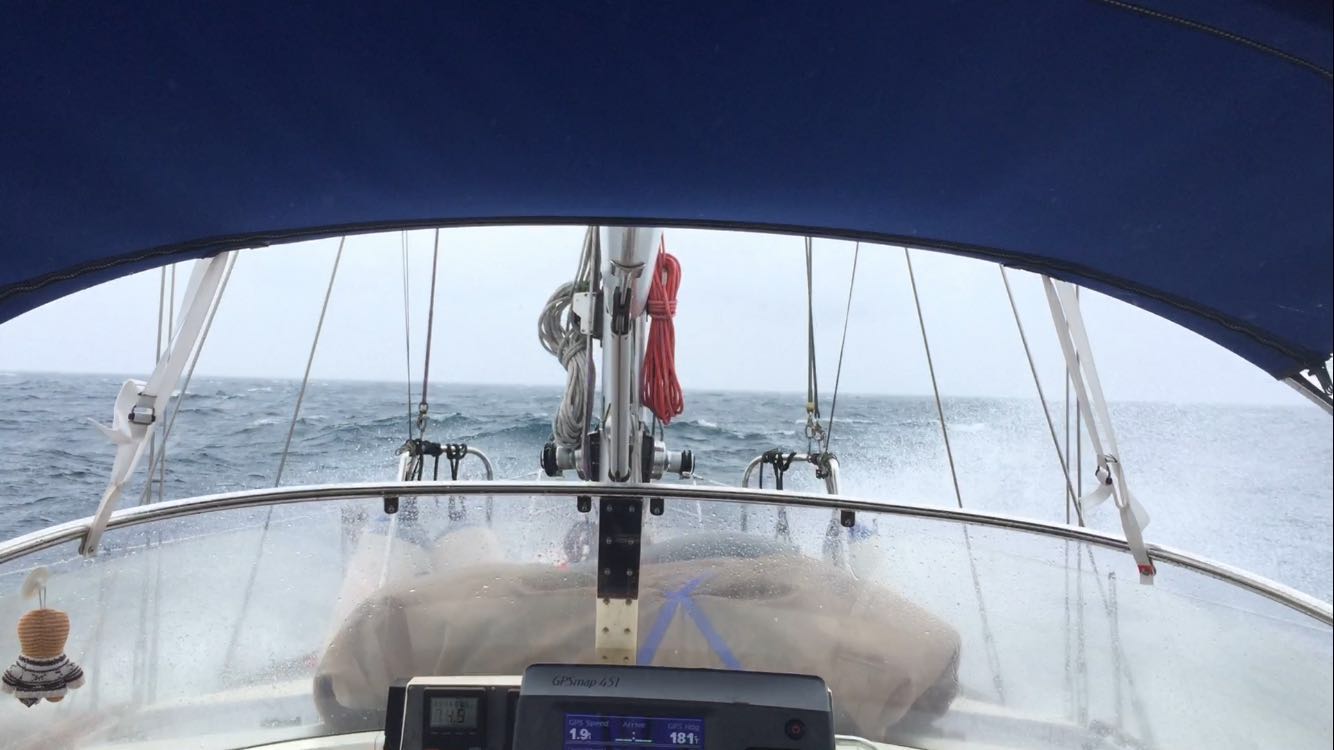 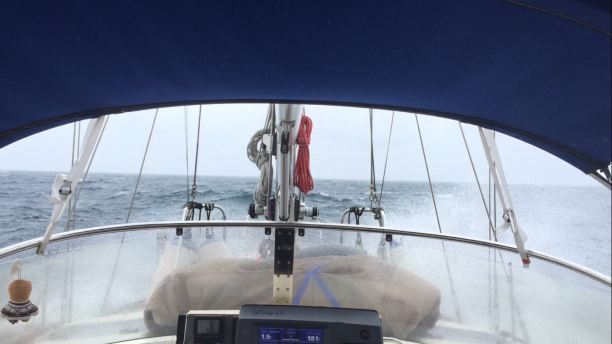 This is the only photograph that exists from our crossing from Plymouth to Brest, taken by Lee as the wind started to build and the waves started to crash over the bow. We had left knowing the forecast was for wind up to force 7 (1) and moderate to rough (2) waves. With hindsight we shouldn’t have gone but having left the Eddystone Lighthouse behind and got a good way out into the channel we were committed.

As our 4 hour watches progressed conditions got steadily worse. By 2pm our log shows that the wind was edging up to 30 knots. Stefan’s lunch of egg mayonnaise and mustard wraps was perhaps ill advised and soon both Clive and Lee were feeling slightly dodgy as we ploughed into the wind and waves. South westerly winds meant we spent considerable time motoring which always makes for a bumpier ride.

At some point during one of their watches, Clive was in the cockpit (3). Stefan describes looking up to him from the companionway (4) to see what looked like someone tipping an enormous bucket of water over his head. Resigned to the onslaught, Clive just shrugged and carried on.

Our night watches were very wet and very cold. By the time of my 5am watch with Lee although the wind was down to about 20 knots Pintail was still rolling around and Lee was feeling very sick indeed. Making way for Clive to sleep on the sofa in the saloon (5) he managed to make his way to the aft head (6) and remained there all watch unable to lift his head from the sink. It looked such an uncomfortable place to be and saw him renamed with a new nickname. Tannoy gave way for Chucky!

Looking back at our log now all of our entries describe the sea state as moderate.  I know I saw 3-4 metre waves during my lone watch that night but none of us seemed willing to acknowledge them!

Initially we had considered getting the weather behind us and carrying on across the Bay of Biscay. Lee and Clive’s time with us was slowly running out because of our delayed departure. However, by the time we caught sight of the French coast in the morning gloom we were all wet, cold and exhausted and all agreed that stopping in Brest was the best option.

Getting to Brest meant navigating the Chenal du Four, a notoriously tricky channel between the mainland and a number of small islands with the accompanying strong tides and rocks. Despite our tiredness we managed to negotiate it quite easily, even managing a wonderful downwind sail (7) for a few hours. We finally arrived in Brest at 7.30pm, 22 hours after leaving Plymouth. 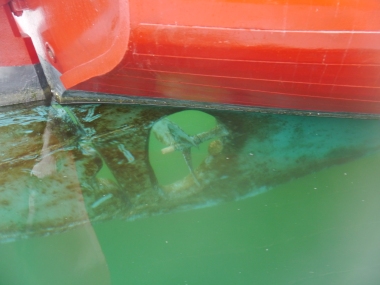 Brest was grey and cold and covered in drizzle but it was safe harbour and we got our first glimpse of the kind of clear water we only dreamed about in the River Crouch. 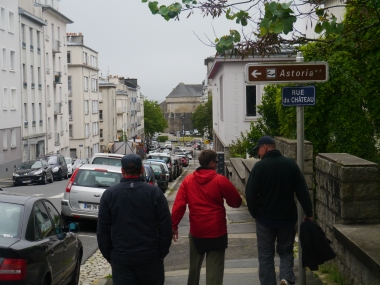 Having booked their flights home seemingly before we had the lines tied on in the marina, the next morning we accompanied Lee and Clive on a reccy to find the train station. We had a drink in a café at a cross road as unappealing as the coffee and a walk in the continuing drizzle to the castle with a view over the marina. 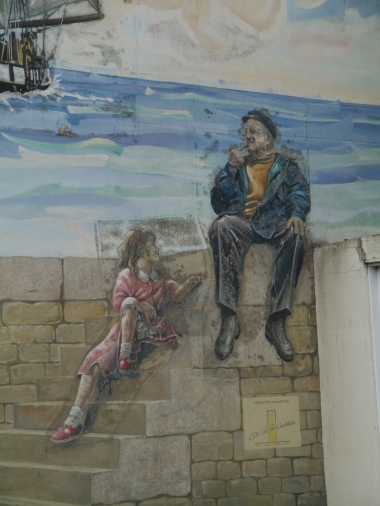 Bombed to the ground in WWII and shrouded in mist, Brest wasn’t the prettiest of places. Some murals in the area around the docks attempted to brighten it up. Had the sun shone our experience might have been somewhat different. 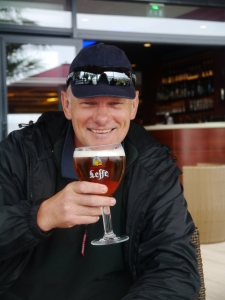 But there was a well deserved beer (or 3) for Chucky.

(1) a near gale with wind of 28-33 knots http://www.metoffice.gov.uk/guide/weather/marine/beaufort-scale

(3) the area on deck from with the steering wheel

(4) stairs to below deck

(6) bathroom at the back of the boat

(7) sailing with the wind behind the boat

9 thoughts on “An unexpected crossing to France”