“Well this is uninspiring”, said Stefan on entering the bay at Porto Heli.

Yet this inauspicious looking hotel has an important place in the genesis of our adventures with Pintail. If you know About us, you will know that for Stefan it was seeing a yacht anchored in the bay at Portinatx, Ibiza as a youth that planted the seed of a sailing dream. However, it was the unfortunate accident that ended his mountain biking holiday in Porto Heli which really started his sailing adventures. From this hotel, instead of taking off on his bike, he and his injured elbow found themselves on a sail boat, Stefan got his keel boat licence and the rest is history! 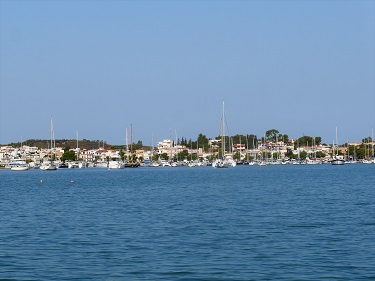 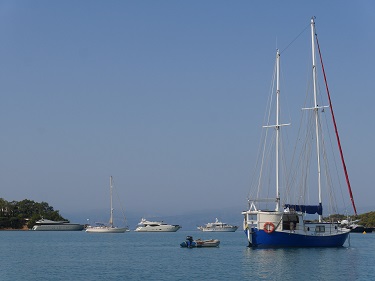 So, of course, being so close, we had to revisit this very important place. A short passage across the Argolikos Kolpos from Kiparissi and we entered the fantastically sheltered anchorage at Porto Heli and dropped the hook just off the hotel Stefan had first sailed from. Being a fantastically sheltered anchorage there were probably more than 100 other boats there. Gone was the splendid isolation of our last stop!

It was particularly busy with motor yachts too with more and more arriving as the night went on. Late that night we heard what I thought was fireworks and what Stefan thought was gunfire. It turned out that we were both right when we went across to Nisos Spetses in the morning.

Spetses is a very important place too in our sailing journey together. Before we bought Pintail in 2014, to increase our sailing experience we booked ourselves to do a delivery trip of flotilla boats from their winter base in Nidri in the Ionian through the Corinth Canal to Navplion. We didn’t realise then that by the time we headed to Greece we would already have done a delivery trip of our own with Pintail.

Spetses had been one of our favourite stops on our Greek delivery trip and, although we are not big fans of revisiting favourite places, we were so close in Porto Heli that we thought we should go across. It is only about 5 miles so we took the tender across in the early morning calm. 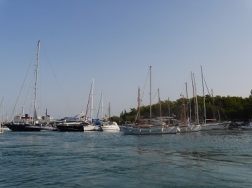 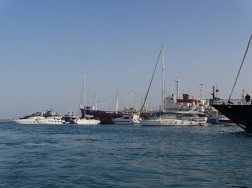 When we arrived it was obvious that something big was going on. There were boats of all shapes and sizes everywhere. Either this Greek navy ship had got the flags out for our return to the island or they were celebrating something. Boats were moored up anywhere they could find a space including tied up to the beached tankers we had seen on our previous visit to the creek. It turns out that 8 September is the anniversary of a decisive battle in the Greek war of independence against the Turkish and that every year this is celebrated at the Armata Festival with a re-enactment of the battle complete with guns and fireworks. If we had known we would have taken Pintail over to watch it all.

In all the chaos of boats in the Creek there were some glimpses of the quiet and pretty Spetses we had visited in April 2014 but we were happy to leave our memories there and not go ashore. 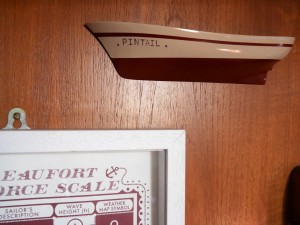 After all we have our little keepsake from Spetses, a little wooden boat we bought for Pintail when we were there. 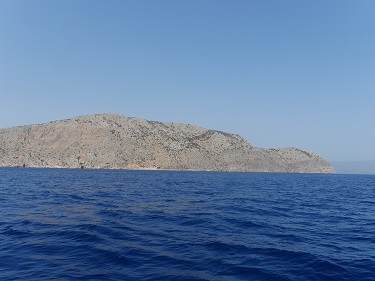 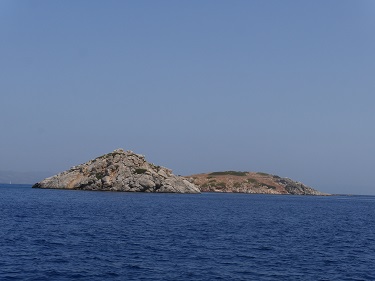 After Porto Heli we were leaving the Peloponnese behind and heading to the islands. The weather wasn’t right for our intended anchorage on the south of Nisos Idhra but we found one on the north coast that would serve to protect us from the wind that was forecast and be a good place from which to leave for the Cyclades. We sailed passed Spetses again and the bare rock of Nisis Dhokos to Ormos Molos, tucked in behind two tiny islets.

We were the only boat there and managed to have a swim to the small, pebble beach before the wind started gaining in strength. The bay was very quiet. Just a few houses and what looked like a Spanish finca style building that might have been a hotel. A couple of boats joined us after a while, one catamaran anchoring a little too close for comfort. The bay was gusty in the wind but we were holding well on the anchor and were protected from the worst.

We knew the wind was due to move round to more from the west during the night but hoped we would have enough protection to last us until first light. The next day we had a passage of some 60nm to the Cyclades. We are not used to such distances since we got to Greece. It suddenly felt like a long way so what we needed was a good night’s sleep…

One thought on “Where dreams took flight”