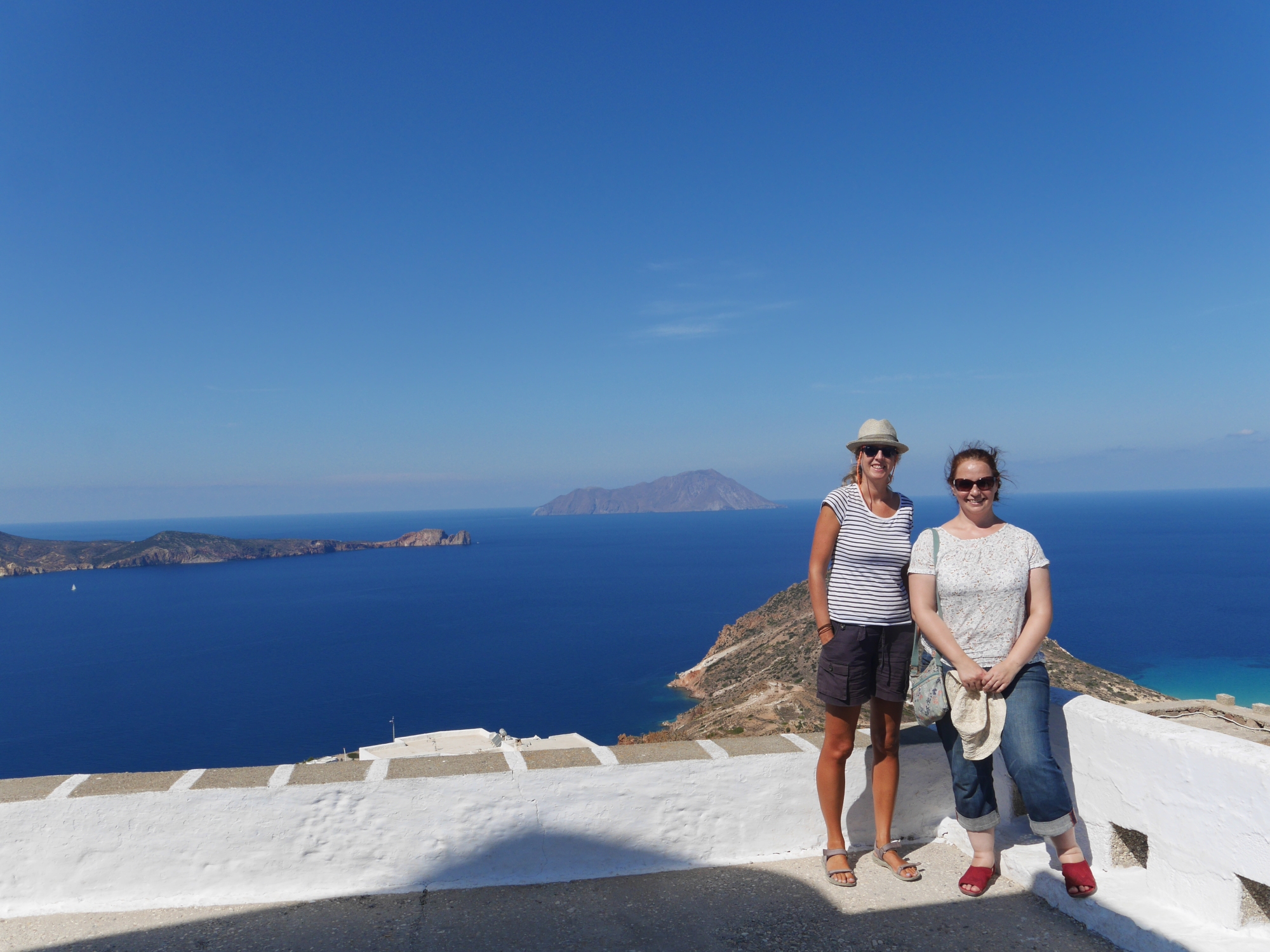 By now you will know that sailing plans are written down, only to be ripped up and thrown up in the air, re-made and made again. For some time we had been planning for our friends Sarah and Jon to come and visit us around my birthday. We had warned them not to make plans too far in advance but as time advanced we were fairly confident we would be in the Cyclades and so they booked flights to Athens. When we got to the Cyclades we made a plan to be on Milos and they booked a flight to the island.

However, as we spent time on Sifnos and Kimolos we watched the weather forecast. The only wind that made the harbour at Adamas on Milos unsafe for us was southerly and you guessed it, for the few days around Sarah and Jon’s arrival the forecast was, unusually for this time of year, for southerlies!

So with a few days before the wind came we hopped across to Milos from Kimolos to check out the harbour. We stayed just one night hoping to be able to return later with Sarah and Jon to explore properly but made a hasty retreat back to Platis Yialos on Sifnos where we would be protected from the wind and where Spyros welcomed us back warmly. This time we didn’t make such a hash of mooring! For a couple of days we sat out the howling wind in the harbour, happy to be attached to our mooring line and waiting for Sarah and Jon to arrive.

After an epic journey of two flights, two taxi rides and a ferry trip and having left home at 4.30am Sarah and Jon finally arrived on Sifnos at about 11pm, a little weary but ready to help me celebrate my birthday the following day. 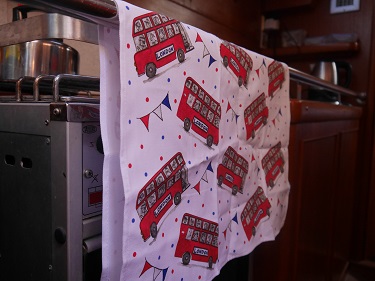 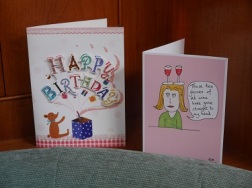 It was so lovely to spend time with Sarah having not seeing her for 18 months and she brought with her some brilliant presents to remind me of home – scones and jam, shortbread, our favourite tea, some London tea towels and not one but two bottles of champagne to help us celebrate. Stefan was also delighted to receive the belts, outboard anodes and water-maker filter housing which they had delivered for us!

My birthday was spent showing Sarah and Jon around Platis Yialos, popping into a local pottery where Sarah bought a beautiful aquamarine jug, and having a swim from the beach. 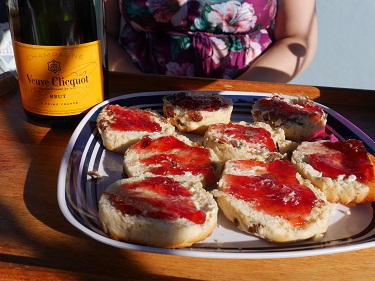 We enjoyed the champagne and scones for afternoon tea and later introduced Sarah and Jon to our favourite restaurant under the tamarisk trees on the beach for a perfect birthday meal.

Once the wind had calmed down we made a plan to sail back to Milos via a night on Kimolos where, after taking a rest from the climb to the chora at the bookswap, we got Sarah and Jon lost in all the alleyways but somehow managed to find a bar. 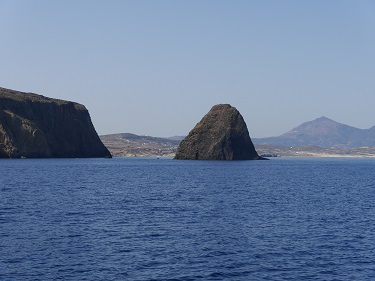 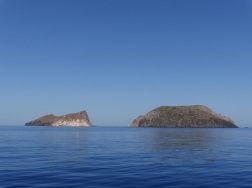 We had a lovely sail back to Milos passed the spectacular rocks and cliffs thrown up by the volcano that gave birth to the island.

Like the Maddalena Islands in Sardinia the sea and wind seemed to have carved animals into the landscape. We saw turtles and rhinos and perhaps the inspiration for the Lindt chocolate bunny on our way into the bay at Milos. 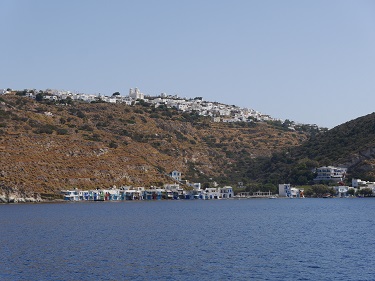 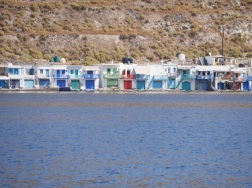 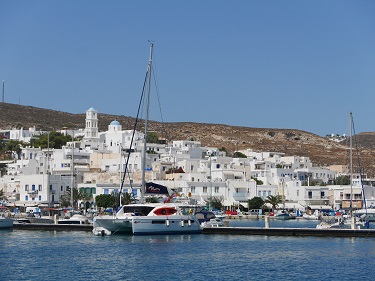 As we sailed into the bay we passed the old pirate lookout town of Plaka with the fishing village of many colours, Kimla, underneath and stopped again this time for longer in the port of Adamas.

Milos is famous for being the place where the Venus de Milo was dug up in a farmer’s field in 1820 and swiftly removed by a French naval officer to end up in the Louvre, Paris. The people of Milos are understandably very proud of this statue of Aphrodite and, as with the Elgin Marbles in the British Museum, there is a campaign to being her home. Until then replicas of her are everywhere.

We spent the first night on Milos at anchor off Adamas (that’s Pintail far right) and took the tender ashore to climb up to the old town. 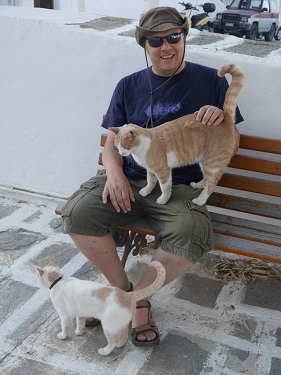 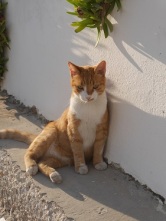 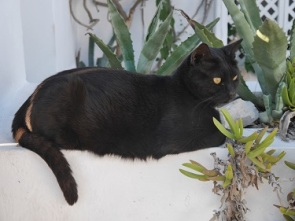 These two cat lovers found plenty of cats to pet up there – they were everywhere and very friendly! 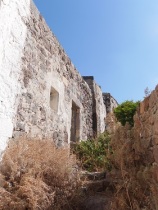 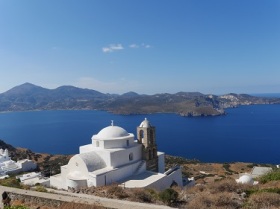 Despite much of Milos being out of bounds for hire cars due to the state of the roads, we hired a car to see as much as we could with Jon as our designated driver. We climbed up the windy road from the harbour at Adamas to Plaka, the old town high above. On foot we hiked further up to the kastro and church at the very top.

From the very top the crater of the volcano that created Milos was clear to see. 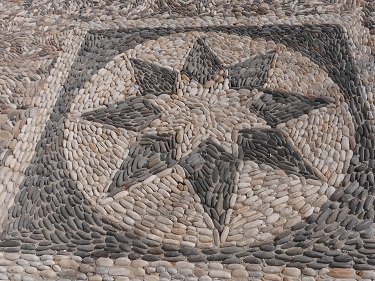 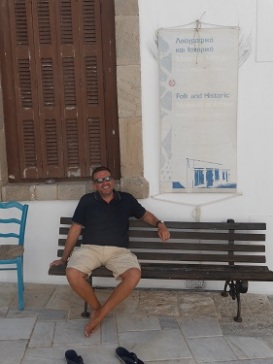 In the centre of Plaka we found beautiful pebble mosaics on the pavements and Stefan looked far too happy at finding the museum closed! 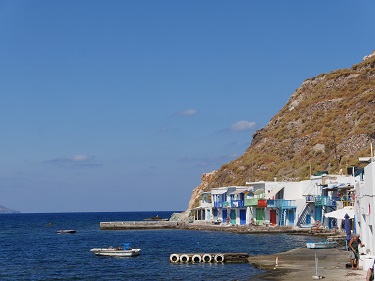 Jon braved the steep downhill drive on the single lane road, hoping for nothing coming the other way with often a sheer drop on one side, to Kimla, the multi-coloured fishing village we had seen from the sea on our way into the bay. The addition of reds and greens gave a refreshing extra splash of colour after all the simple white and blue everywhere.

Although most of the houses seemed to have been turned over to tourist accommodation and shops there were still fishermen there working on their boats kept in the sheds at sea level with their homes above. 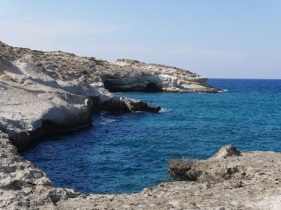 After lunch in Pollonia, our last stop was at the spectacular beach at Papafragas where volcano, sea and wind had hewn bridges, caves and a perfectly protected inlet for swimming. We had, however, forgotten to pack our swimming things. 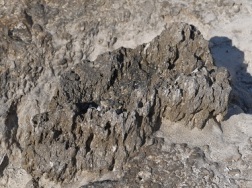 The surface of the rock was very mysterious with what looked like the stumps of burned tree trunks fossilised into it. Higher up the rock was like molten candlewax. 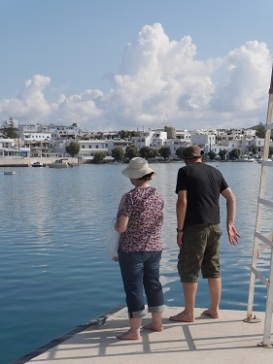 Before Sarah and Jon left us on Tuesday there was time to feed the fish from the pontoon and for a leisurely coffee opposite the ferry dock. We had observed that the ferries don’t always keep to timetable and if early do not wait for anyone who might think they do so we got there good and early. As it happened theirs was a little late. 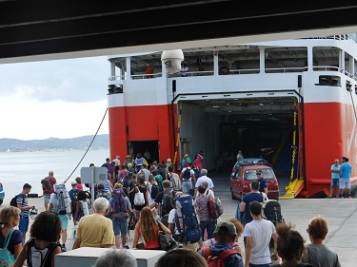 But the time had come for Sarah and Jon to swap the small boat for a big one to take them back to Athens. Watching the chaos at the ferry dock was great entertainment with foot passengers, container lorries, cars and vans all seemingly trying to get off and on at the same time. No one seemed to be directing anyone but somehow it worked and our visitors were soon safely on board. Sarah texted us very excitedly from the ferry to tell us it even had an escalator, a luxury we have yet to fit to Pintail!

Thank you Sarah and Jon, for making such an epic journey to find us, for a wonderful few days helping me celebrate my birthday and all my lovely presents, for great company and expert toilet pumping!

One thought on “Birthday visitors”