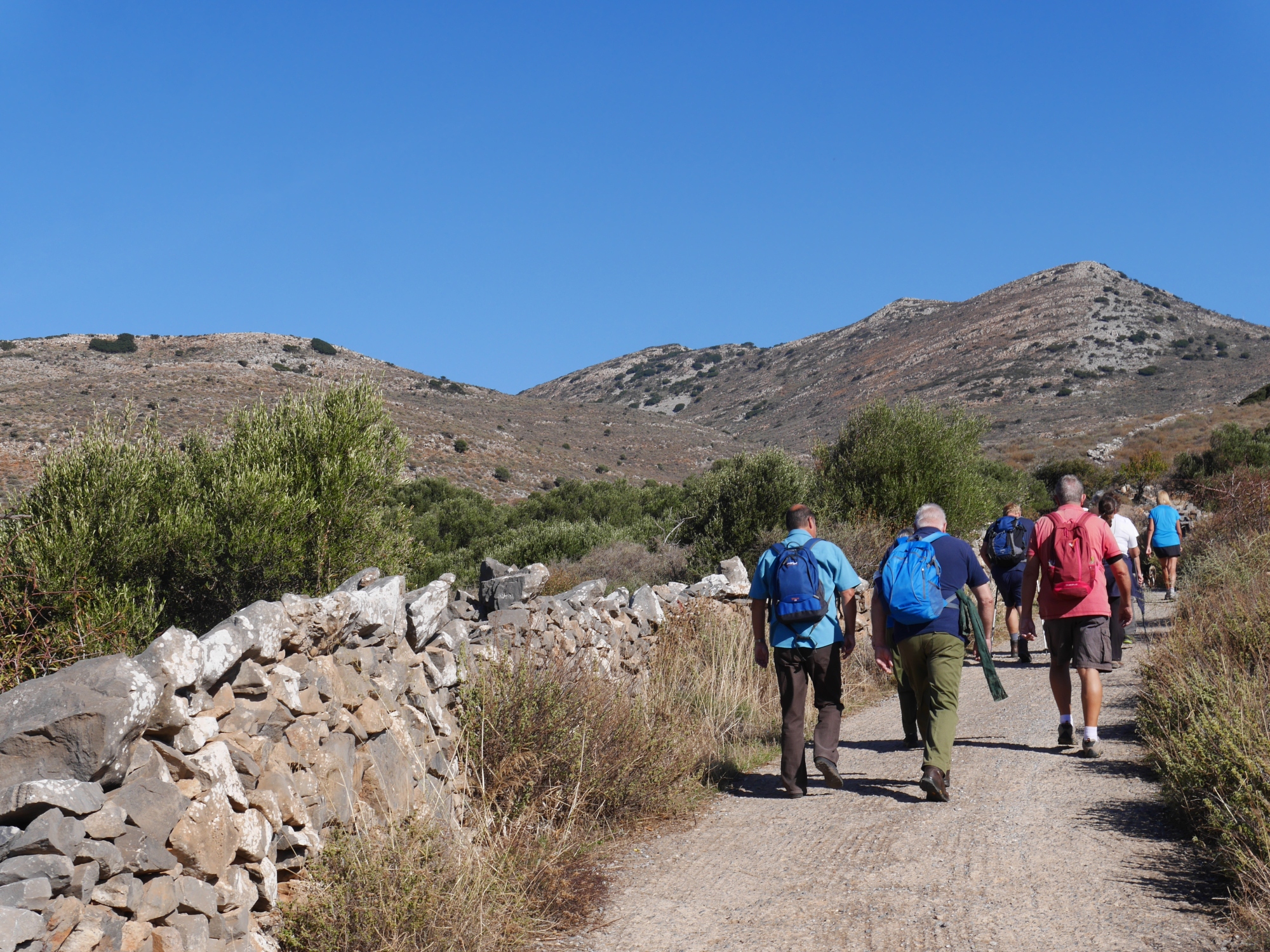 Arriving for winter in Agios Nikolaos we found a wonderful marina community and a busy weekly calendar of activities from Friday drinks and Sunday BBQs to Nutty Knitters and music groups. Whilst Stefan took to the roads of eastern Crete on his bike I joined the Thursday walking group for a weekly ramble/scramble through its spectacular scenery. 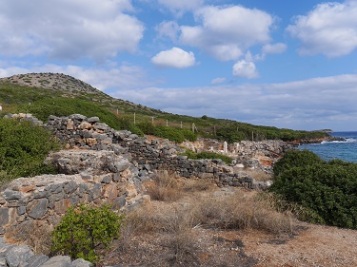 Our first walk saw me return to Spinalonga Lagoon for a walk around Nisis Kolokythas, opposite the town of Elounda, and passed the ruins of a Roman villa of the ancient settlement of Olous. 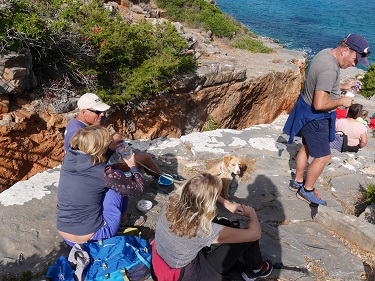 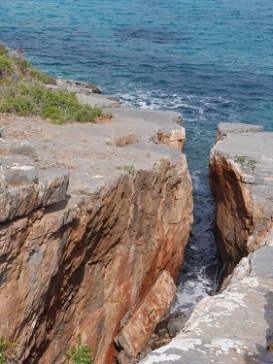 We stopped for lunch on the edge of a small ravine. Babs and Rene’s puppy, Rizzo, found walking on the lead very frustrating and Babs’ arms got as much of a workout as her legs!

Our second walk took us inland and up towards the small farming communities around the village of Kastelli. The walks leader and Crete resident, Tony Cross, explained that the fertile plateaux tucked amongst the hills and mountains of this area of Crete were once lakes. Now dried out their soil provides very fertile ground for olives and other crops. 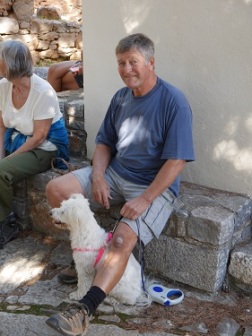 At the Monastery of Keramos we were warned not to open the doors in case of disturbing the monks who make a pilgrimage there and our pontoon neighbour also Tony kept his temporary charge, Miep, under careful supervision. She looks cute but has a very vicious streak!

We got a little bit lost amongst the olive groves of the hills but were rewarded with stunning views across the plateaux and the mountains.

In the shadow of the windmills we had lunch at the ruined secret school, a place which kept Greek language, history and religion alive during the many years of Turkish occupation. 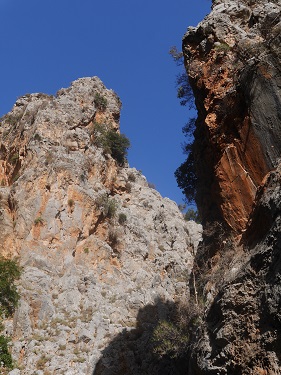 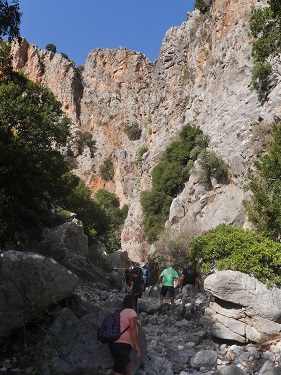 Having visited Kritsa Gorge briefly with Phil I got a chance to walk it properly with the group. Trying to keep memories of walking the Samaria Gorge in a heatwave during my 20s out of mind we set of into the mouth of the enormous cliffs. 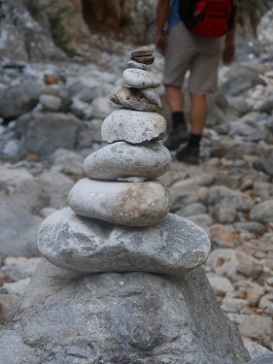 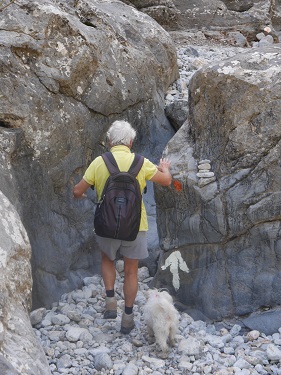 The route to take through the huge boulders was well marked with cairns, arrows and very amusing fried egg markers. I just followed Ine and Miep! 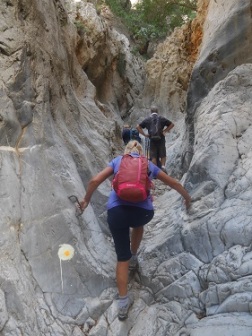 There was a lot of scrambling up the rocks, aided in some places with foot and hand holds and in one place a rope.

In mid November it seemed strange to see bulbs flowering and the goats kept a careful eye on us from the cliffs above. 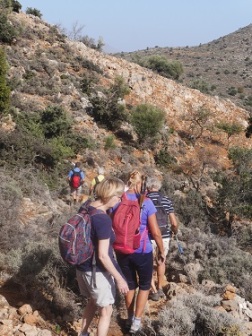 Coming down we followed an ancient Minoan path back to the cars.

I missed one gorge walk when we were busy getting Pintail out of the water and took a break from the walks whilst we went home to the UK. On returning the next walk to the Bat Cave was cancelled two weeks in a row due to the weather. 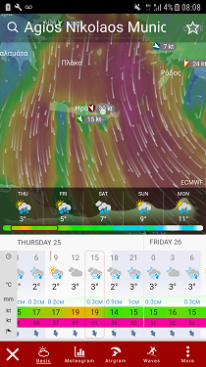 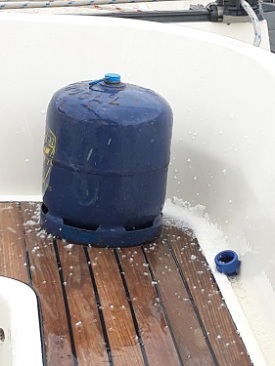 We were grateful not to be out waking in the very high winds and driving hail!

It was, however, third time lucky for the walk to the Bat Cave when we woke to blue skies and sunshine on 1 February. 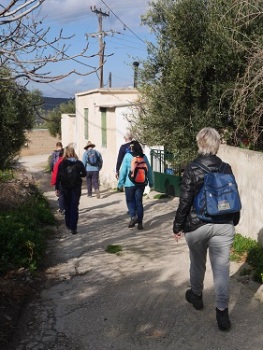 We set off from the village of Kavousi through olive groves full of beautiful purple anemones and yellow oxalis (the latter of which will always remind me of my time Volunteering at the Alameda in Gibraltar). 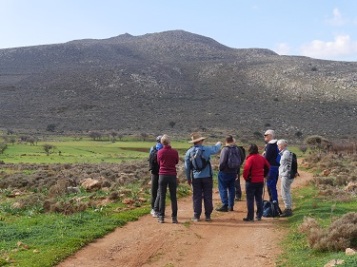 As we headed towards the Agriomandra Gorge Tony pointed out another prehistoric lake turned fertile valley. The rich red clay is dug out for making pottery.

As on all the walks so far, our only company was sheep and goats. The tiny black kid bottom left was only a few hours old and still wobbly on her legs. 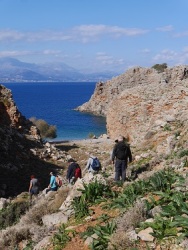 The descent into the gorge was rocky and steep and took us passed a tiny cave church with nothing inside but a dead goat. 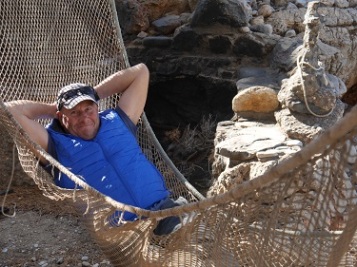 The rest stop on the beach at the bottom was very welcome with Jen and Steve taking full advantage of the furniture left there by fishermen.

But what goes down must go up and soon we were scaling the short but very steep climb out of the gorge to the cliff top above. 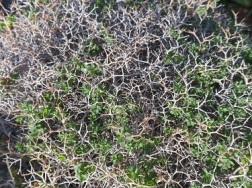 The scrub on the cliff top was covered in beautifully scented thyme, sharp prickly bushes, twisted roots and the occasional Cretan iris. 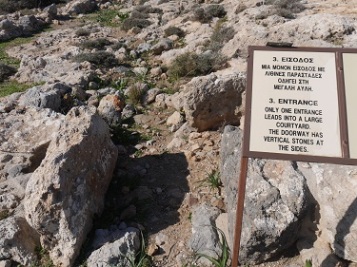 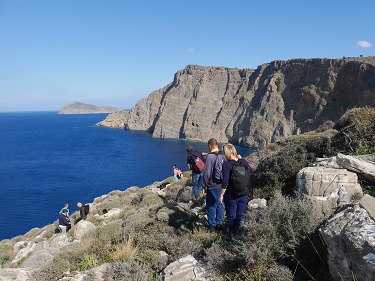 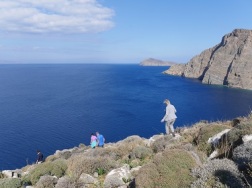 and finally the bat cave. Whilst half of us took advantage of an early lunch the more intrepid climbed further down the cliff to crawl into the dark cave. They returned out of breath and not having seen any bats. 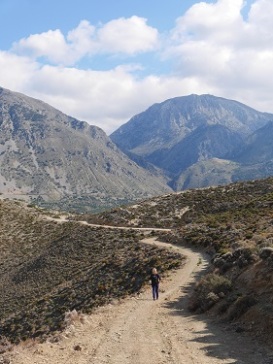 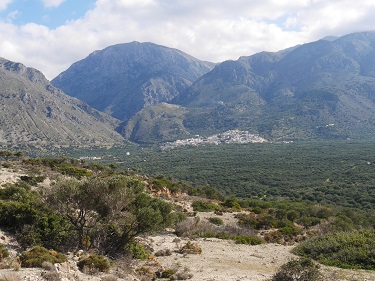 The return leg saw us head back inland towards Kavousi nestled at the foot of the surrounding mountains. 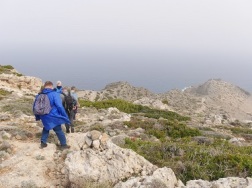 Starting my final walk up at the wind farm high above Spinalonga Lagoon, we climbed down 250 metres on rocky goat paths to the peninsula which still has the ruins of Venetian lighthouse on top as well as the more modern one at the end. 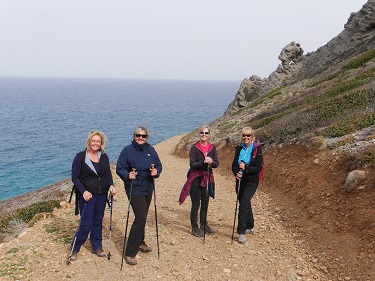 Opting out of the two foot wide path next to a 20 metre drop to the sea, a more sensible group of us choose the wider road round to the lighthouse itself and arrived ahead of everyone else for our lunch. 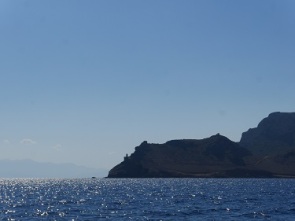 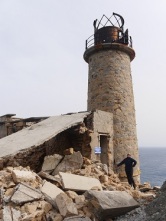 When we passed the newer lighthouse by sea we could not see just how derelict it was. On arriving by foot the lighthouse keeper’s cottage was completely ruined by the weather and the light missing entirely. Luckily for sailors the new one on the cliff operates in its place. 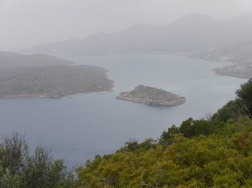 The return journey was a tough, slow climb back up but from the top the gloom had at least lifted enough to see Spinalonga one more time.

At this point I retired from further walks as we concentrate on preparing to set sail again at the beginning of March but they have a brilliant way of getting to know Crete, its history and geology and see places truly off the beaten track. 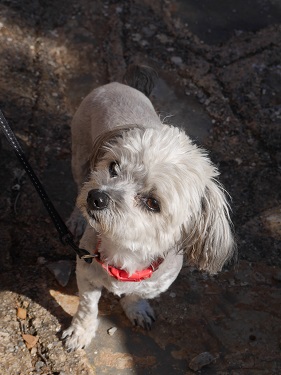 A big thank you to Tony and Dave for organising and leading the walks and to my fellow walkers, human and canine, for their camaraderie and encouragement up and down the steep bits and especially Liz for always bringing sweets to keep us going!

One thought on “Thursday walks”