For the longest time I had dreamed of visiting Cappadocia and been captivated by pictures of its other-worldly landscape. So after the magic of the whirling dervishes in Konya I was very excited to set off early to head deeper into the centre of Turkey. 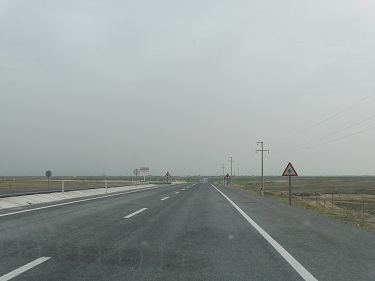 The road from Konya showed no signs of that landscape as for mile after mile we followed the flat, empty roads across the plateau. The long journey was proving a great opportunity to learn some Turkish. In a week our Turkish vocabulary already far exceeded our Greek even after spending 7 months there. We had quickly perfected all the important phrases. “Iki çay, lütfen” being the most important. “Two teas, please.”! Sharing an alphabet, albeit with some very different pronunciation, has made it so much easier to learn than Greek. 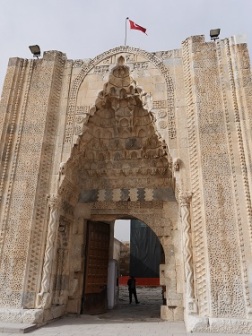 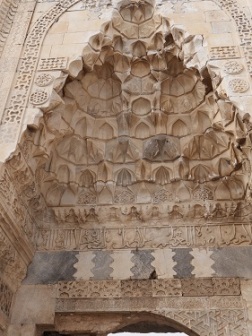 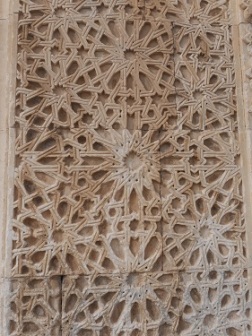 The road might have seemed very modern but we found evidence of a much more ancient route to Europe as we passed the roadside caravanserai of Sarihan where 13th century traders would have rested their and their camels weary heads for the night. 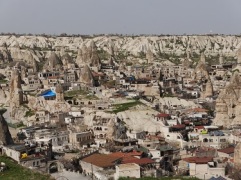 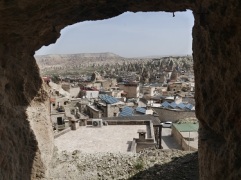 And then seemingly out of nowhere we drove down into the town of Göreme and a valley full of fairy chimneys turned hotels where we found our own rock hewn room in this whimsically, wacky place. 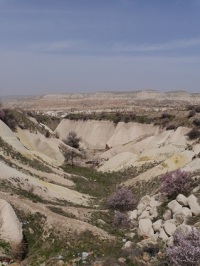 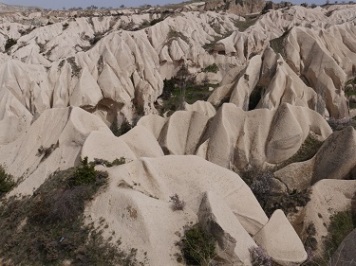 We wasted no time in getting out on our first hike. A free ride from the hotel to the top of the trail head saw us climbing down into Güllüdere or Rose Valley. The dusky pink of the rock was only inhanced by the many blossom trees and best of all we seemed to have the place entirely to ourselves. 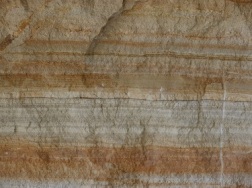 The weird and wonderful rock formations of Cappadocia are the legacy of the long ago eruptions of ancient volcanos. The resulting crumbly tuff rock has over millennia shifted into the most unnatural looking shapes. 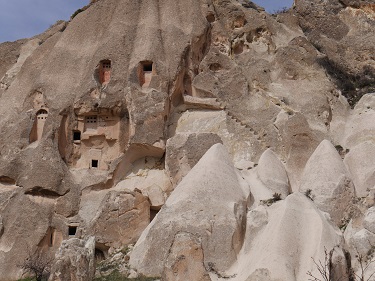 The softness of the rock lent itself to being hewn into dwellings for people and pigeons. Everywhere we looked, at incredible heights, were staircases and rooms in the rock. 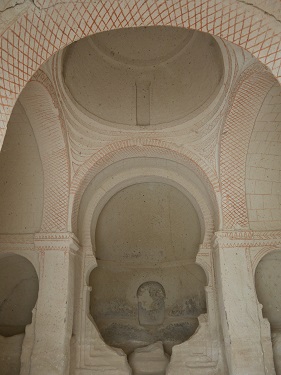 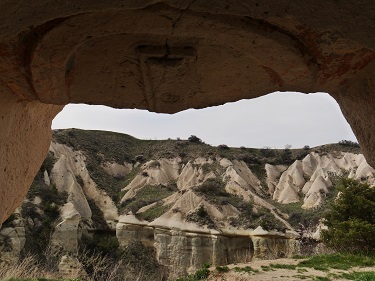 Hidden too were early Christian churches which left you pondering the levels of devotion required to get there but which certainly offered a pew with a view. 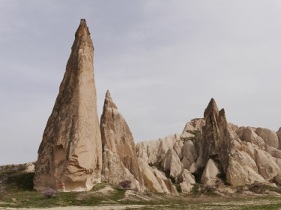 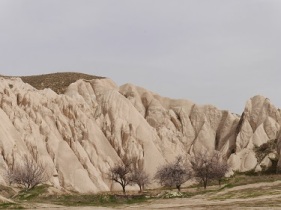 We continued walking awe-inspired passed more wind and water hewn peaks. This is one of those places, spectacular as they may look in pictures, you just have to experience for yourselves. It was all a little bit overwhelming. 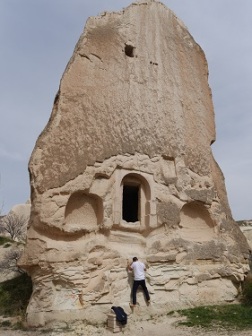 Stefan did both our share of the climbing to check out more churches and we both returned with trousers covered in sandy dust.

Our afternoon in the Rose Valley would probably have been enough but the following morning we got up early hoping to beat the crowds to the Göreme Open Air Museum, the site of an important Byzantine monastic settlement. 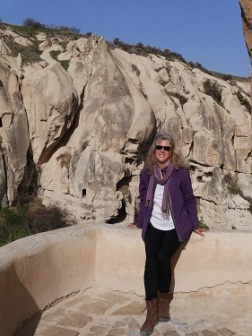 Even getting there at opening time at 8.30am we didn’t quite miss the crowds. If you can’t beat the coach loads of Chinese tourists, you can join them in posing for photographs! 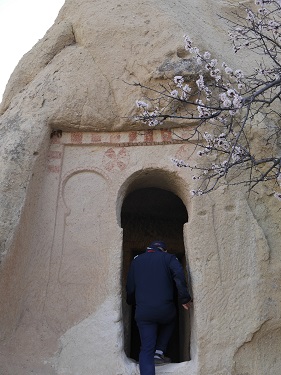 What followed was a couple of hours of climbing in and out of rock hewn churches and monastic rooms. Many still had the remains of those who had built them in tombs just inside their entrances.

The frescos inside were still beautifully bright, especially in Karanlik Kilise, the Dark Church, where light had not been able to fade them. Photographs were not allowed in most to avoid flash damage but I managed to get a few. 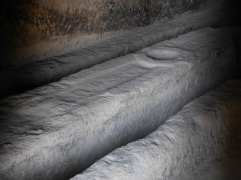 Rock hewn refectory tables and wine stores gave insight into how the monks lived. We weren’t sure the graffiti was contemporary though. 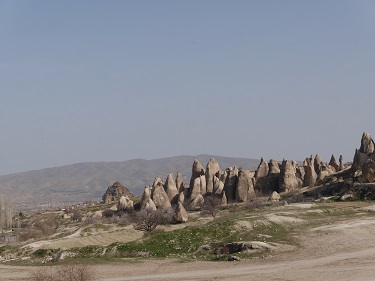 Having again tested Stefan’s tolerance of the Byzantines we headed out again into Cappadocia’s wild and endless landscapes and decided to walk back to the hotel via Görkundere or Love Valley. 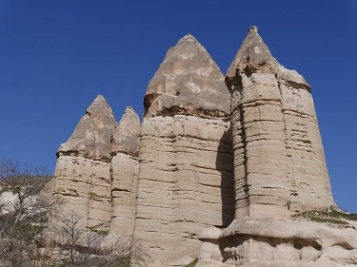 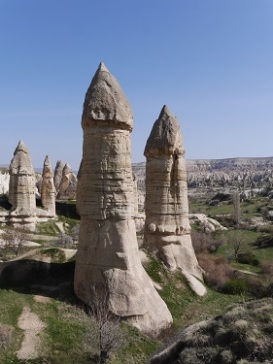 As we walked into the valley it did not take a great deal of imagination to work out why it got its name and we sat incredulous, eating an orange, on a cliff overlooking these naturally formed phalluses!

Our final visit was to one of Cappadocia’s underground cities. Dating from the 4th century BC these networks of underground rooms were extended by the Byzantines in the 6th and 7th century AD as a place to escape from Persian or Arab armies. We chose to visit Özkonak which was dug to 4 or 5 stories deep but some went down 8 or 9. All the everyday needs were catered for – shops, stables, churches, wine stores – and all ventilated by a series of deep ventilation shafts that made you realise how far down you had gone.

The most incredible feature for us were the enormous millstone doors, hewn in situ to seal off the entrances in case of invaders. On emerging back into daylight we stopped at the çay café opposite and were introduced by the owner to his father, Latif Açar, who had discovered the city whilst working on his land in 1974. The lovely one armed man offered to sign a guide book if we bought one. We thanked him but declined. Our Turkish and his English did not stretch to exploring his discovery any further.

It’s fair to say that our few days in Cappadocia had been beyond all our expectations and we left feeling completely overwhelmed by its beauty and whimsy. There are few places we have seen that leave such an impression and everywhere else has a lot to live up to.

We decided that 6 days away from Pintail was long enough and decided on one long 750km day’s drive to return home. Another caranvanserai provided a brief stop but we carried on back across the plateau. 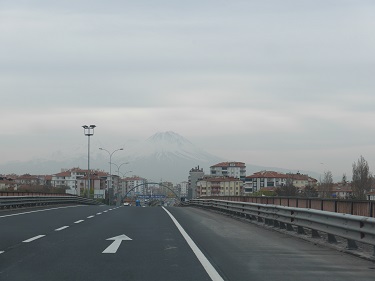 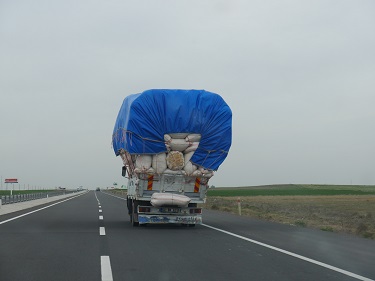 At Akansaray we caught a glimpse of Mount Hasan, an inactive volcano of 3268 metres, but mostly our views were of cotton lorries and industrial scale farms. 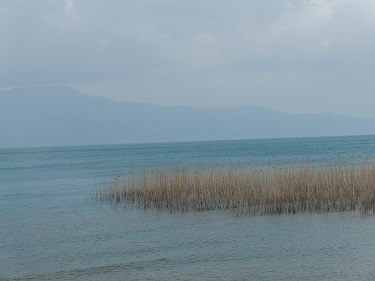 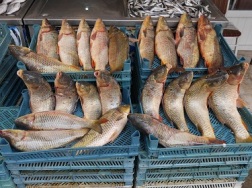 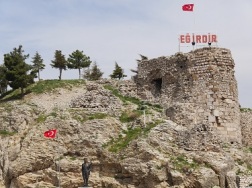 We took a different route back to the one we had come on, through Turkey’s lake district. We drove along the length of the shore of Lake Eğirdir to the town of the same name where the lake’s carp were on every menu.

Finally arriving back in Finike just before sunset, it had indeed been our most epic road trip to date but one we will never regret making.