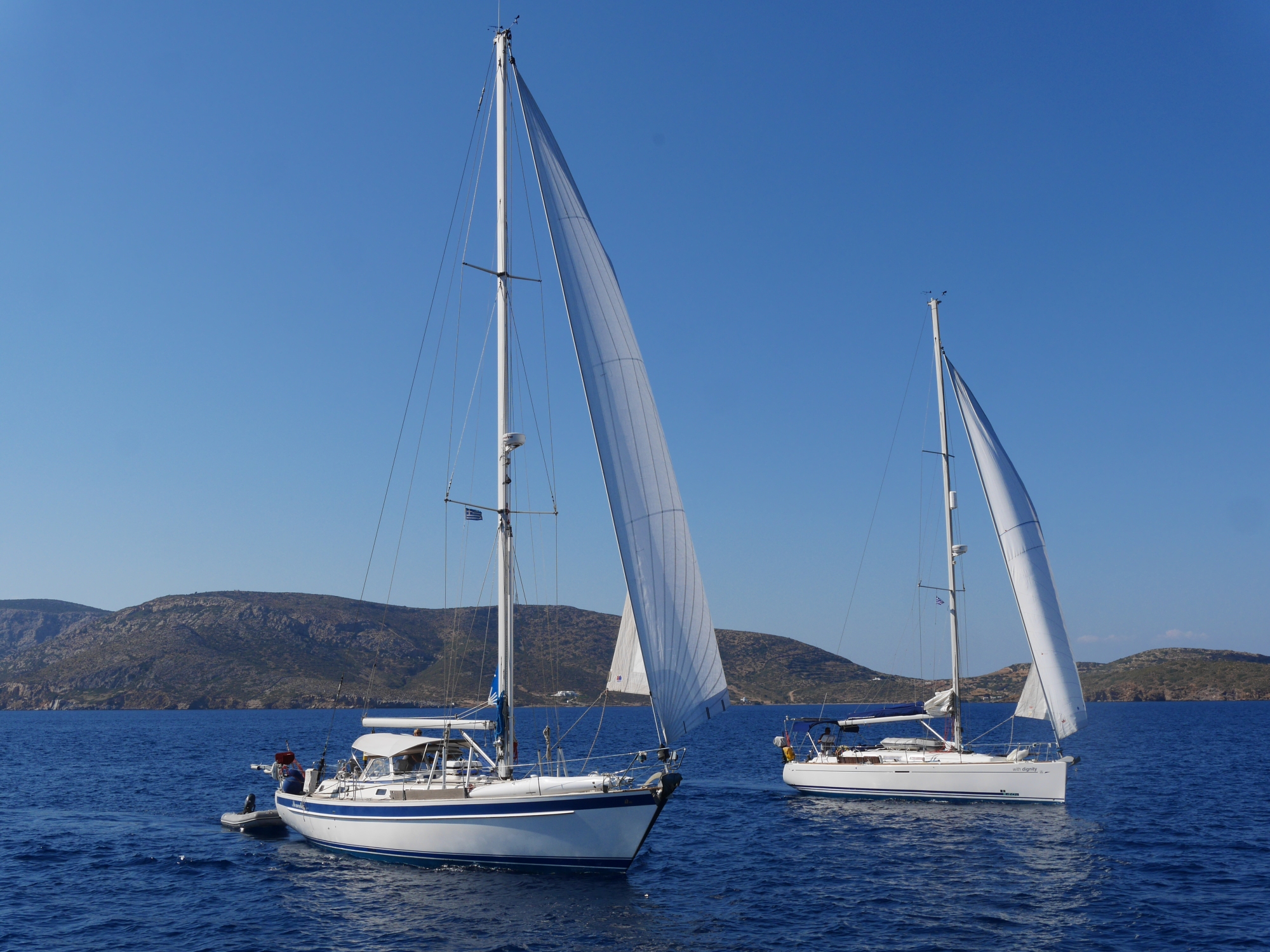 From Didim in Turkey we planned to head north to check back in to Greece in Samos and sail through the Eastern Sporades. Our best made plans unmade, however, often lead to the best of times.

As we had sailed around the Turkish coast our friends from our winter in Agios Nikolaos, Crete, Babs and Rene on SV Momentum had been shadowing us across on the Greek side through the Dodecanese. As we were leaving Didim they were heading to Kalimnos, only 30nm away. It was too close not to grab the opportunity to meet up. And to top it all our friends Babs and Steve on SV With Dignity were not far away either.

Having checked that we could deal with the immigration and customs formalities on Kalimnos we changed our plan and headed southwest for a reunion that lasted just under two weeks and some unexpected island hopping in the northern Dodecanese. Despite our excitement at seeing our friends again it was a sad moment crossing back into Greece and taking down our Turkish courtesy flag. 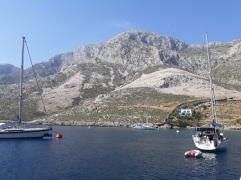 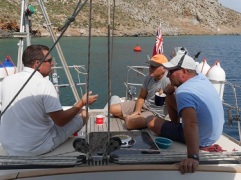 Babs and Rene had reserved mooring buoys for us in Palionisou Bay on the northeastern tip of the mountainous island of Kalimnos. Soon we were all sharing tea and biscuits, swapping stories and getting reacquainted with Rizzo on board Pintail. 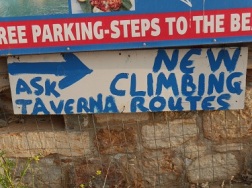 With its towering cliffs it is not hard to work out why Kalimnos is so popular with climbers. From the boat we watched them dangling precariously from the sheer rock face above us. 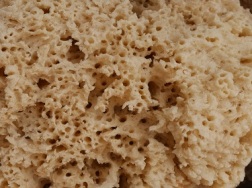 But if it is climbers who now bring in lots of money for the local economy, it is the sponge divers of old for whom the island is best known.

We spent some time with Nikolas, a former sponge diver who was born in Palionisou and now runs a tavern. He told us about his father’s and his own experiences of diving for the sponges. Death and serious disability were never far away in the dangerous life of a sponge diver, particularly the old fashioned way his father dived with a stone. Under water for up to 4 minutes at a time to depths of up to 75 metres, he told us it was exhausting, often fatal, work. Thousands of men dies and many more living in the island’s main town live with disabilities from diving accidents. Nikolas showed us his photos – this one taken of him selling his sponges in Chania, Crete. Although a harsh life and one he left behind many years ago to teach in London before returning, he looked back with a real pride in the traditional industry. It is an industry which has all but died out in the Mediterranean – as the sponges themselves fell victim to the Chenobyl nuclear disaster. Now natural sponges are harvested in Cuba and America. 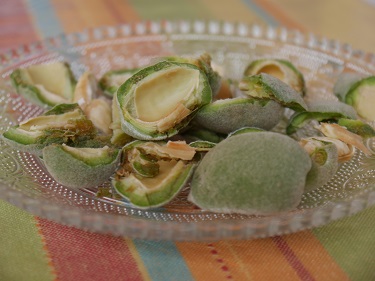 Whilst listening to Nikolas we enjoyed fresh lemon juice and almonds from his trees. His life is still quite tough – apart from the climbers who pass on their way to the cliffs and a few sailors who make it beyond the beach, there is not much passing trade in Palionisou.

Whilst we didn’t join the climbers in climbing any big rocks we did hike up behind the tiny hamlet for views back down and where Rizzo had a tense stand off with a rather large goat. 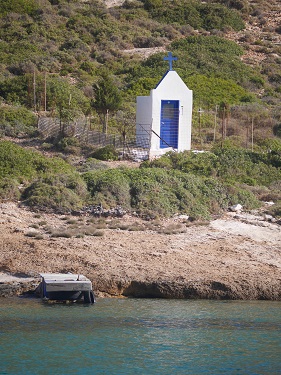 Soon we moved on to a couple of peaceful anchorages on the north of Leros, including one off the tiny uninhabited island of Arkhangelos. Peaceful that is until the Greek army started using another island as target practice! We had wondered what the white stone circles and markings were. As gunshots whistled across the water and dust blew on impact we soon found out. We’d heard no warnings issued about firing practice. 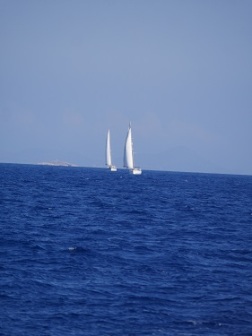 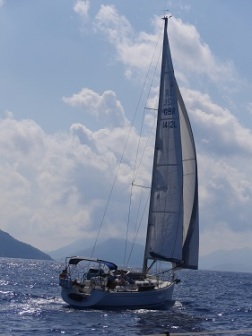 With some stronger winds forecast for a few days we raced round to the protection of Lakki back on Leros. It didn’t take With Dignity long to take the lead but at least they were there on the quay to take our lines for us! 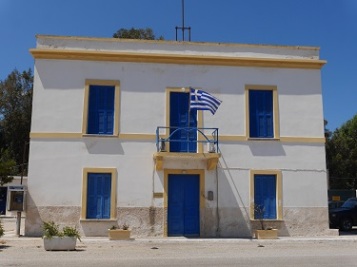 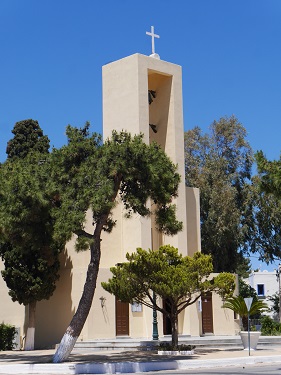 Lakki town had an altogether different feel. Returning from a walk to the chandlery Stefan’s first impression was that it was like the Wild West. It did have somewhat of a deserted feel to it along with some 1930s Italian style architecture that spoke of its past under fascist occupation. 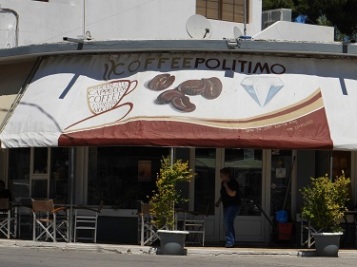 There was more of an Italian influence in and around the town’s many coffee shops.

Nothing on Leros was very far away so whilst Rene and Stefan took to their bikes the rest of us hired a car and drove around the whole island in half a day.

The boys get all the credit for getting up to the castle (more of those Crusaders!) the hard way 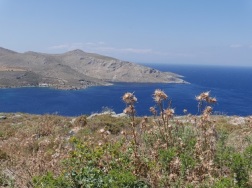 but we were all rewarded with wonderful views back down across the island. 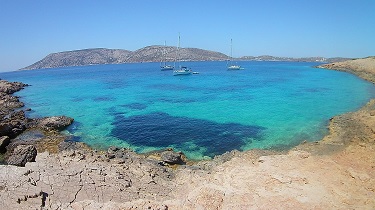 When the wind abated we moved on northwards towards Lispi but before we got there Babs and Rene had heard from friends about a tiny island perfect for a swim stop with a cave to dive through. Anchoring off Makronisi the boys headed off to swim through the cave whilst us girls braved the incredibly sharp rocks to watch them. Rizzo found her own entertainment playing a daring game of chase with the nesting gulls. It was a stunningly beautiful spot and, without the tip off, one we would otherwise have sailed right passed. 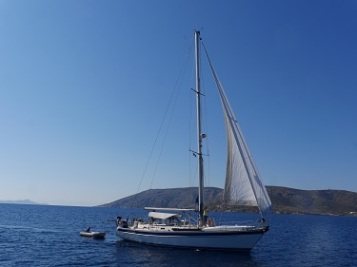 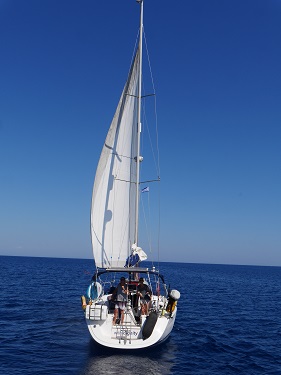