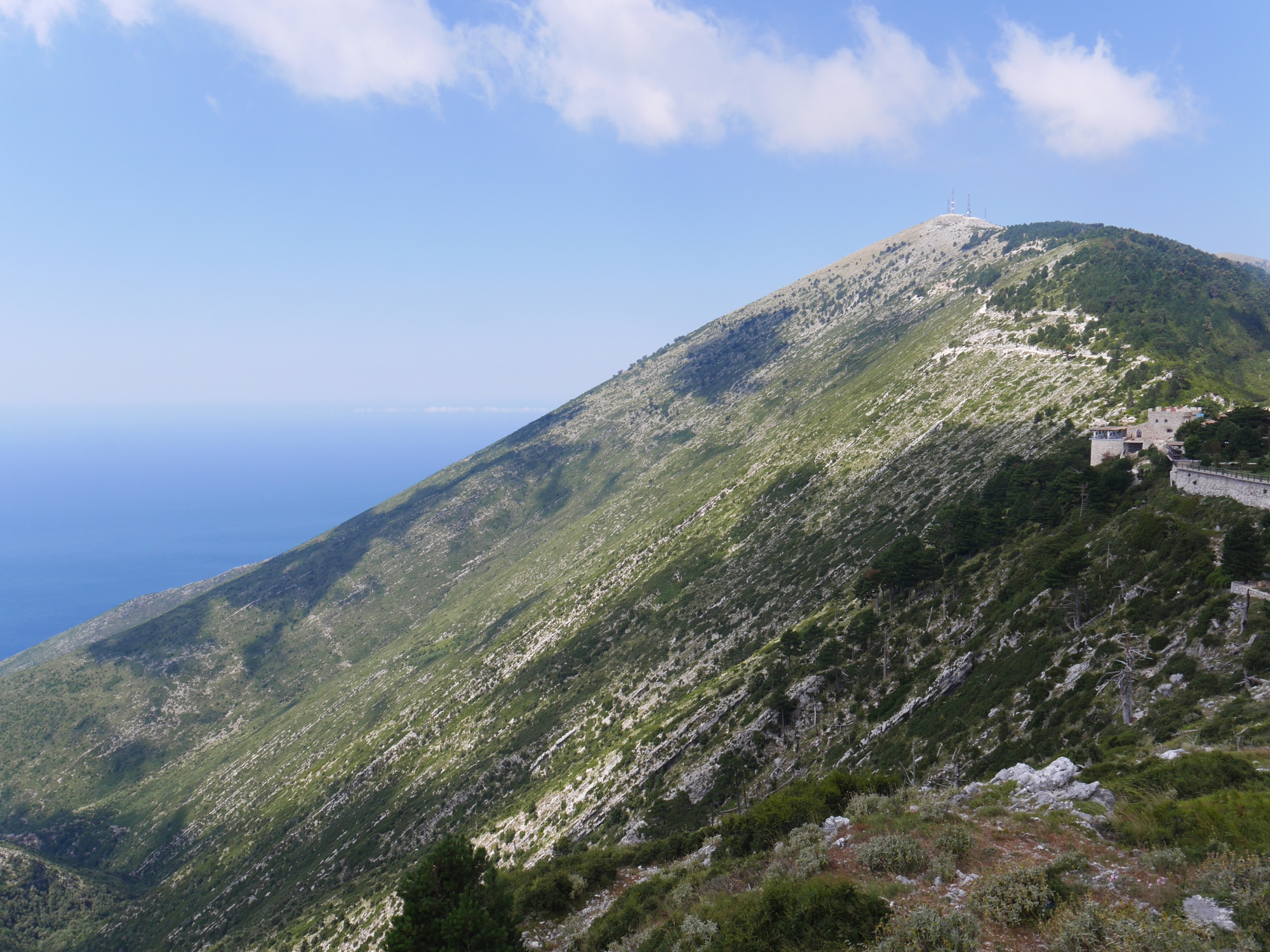 With Pintail safe in Orikum Marina we hired a car and set about seeing as much of Albania and learning as much about the country as we could.

And our first experience of its roads was an interesting one. Very quickly we learnt two things. First, there are two types of roads in Albania – the main road and the not really a road at all. The main road, particularly in Southern Albania, is usually a single carriageway asphalt road. There are not very many of them. This made my job as navigator very easy – find the road and stay on it until our destination. The reason for the lack of roads is the geography. There are mountains everywhere. This made Stefan’s job as driver not quite so easy! After our first day he said “I don’t think I have ever driven round so many bends!“

And second, there are also two types of drivers. The ones who rigourously observe the (in Stefan’s view) slightly over cautious speed limits of 20 or 30km. And the ones who don’t and who overtake at great speed regardless of bends, visibility or oncoming lorries. How we did not see a horrible accident we’re not sure but we quickly understood why Albania has one of the world’s worst road safety records. And perhaps why the speed limits are so low in an attempt to deal with this. 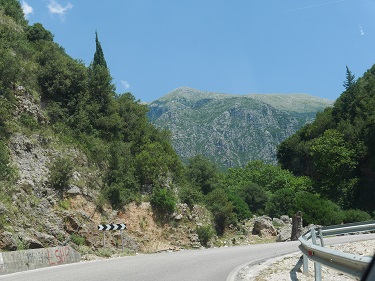 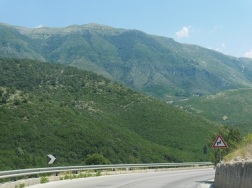 But what a road we chose to take as our first experience. From Orikum to Sarandë it took us up to 1000m and then down the Llogoraja Pass. 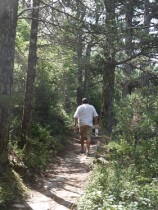 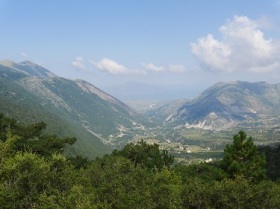 Just outside Orikum we started to climb into the pine forests at the foot of the mountains. We stopped for breakfast in one of the hotels along the road from where we had read we could hike up to Caesar’s Pass. It was a steep climb but once we emerged from the trees got a view back down towards Orikum and the Karaburuni Peninsula. Far away from visible civilisation is was easy to imagine that the view was just the same as that Julius Caesar and his legions had looked out at after their arrival at Palasa.

Continuing in the car we reached the top of the pass and stopped for spectacularly sheer views down to the Adriatic. In the heat haze we are sure we could just about make out the coast of Italy. 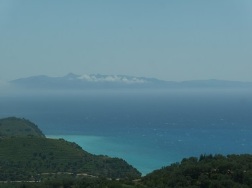 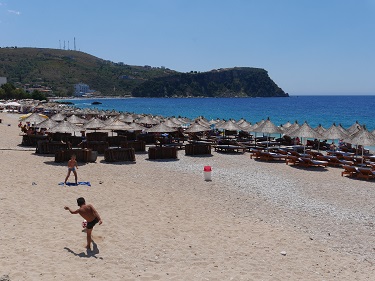 We wound down the Pass with fantastic views of Albania’s Riviera coast and down to Corfu, stopping briefly for a drink on the beach at Himara, one of the bigger resort towns. 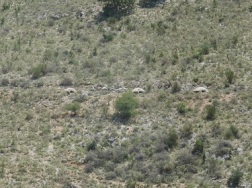 Just down the road we passed through our anchorage at Palermo Bay and got a good view of the old military base and the submarine pens hidden in the hillside. Of course there were plenty more bunkers to be spotted.

Next on our itinerary, given the success of Ali Pasha’s, was due to be a visit to another castle at Borshi but this was to be our first encounter with Albania’s B roads. Gone was the asphalt and cars, this was a dusty dirt track with big pot holes and altogether different transport to avoid collision with. We got about 500 metres before fearing for the hire car, thinking twice about it and somehow turning around. We were scraping the bottom of the car and the castle still looked a long way away! You can just see it top right in this photo. 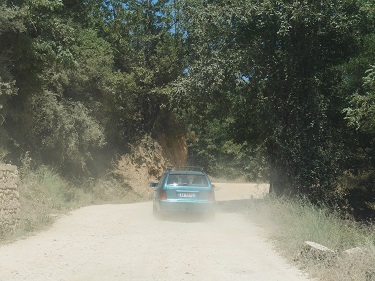 Just outside Sarandë we turned inland to find the mysterious Blue Eye tourist attraction. We followed the traffic off the main road onto another dusty dirt track with big pot holes. We realised that hitting the road has an altogether different meaning in Albania. Determined not to be beaten by this one, however, (and there being no way of turning around) another 2km of bumping around in a dust and we reached the car park 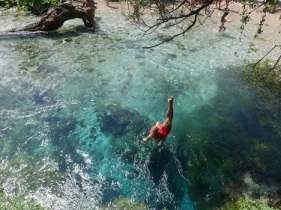 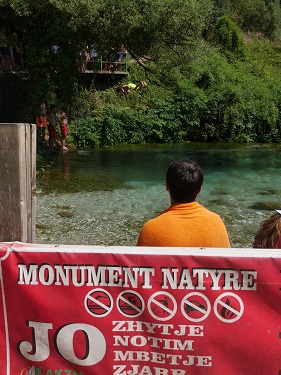 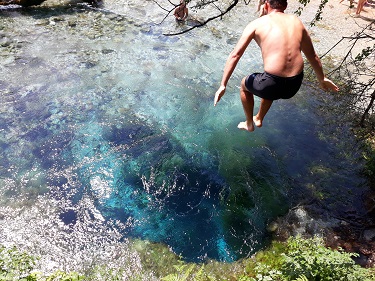 and followed the crowds to the Blue Eye, a deep underwater spring.

It’s fair to say that this place was not a hit with Stefan. It was a bit like the waterfalls we visited in Turkey – just without an onsite McDonalds although there was a snack bar and souvenir stall. A place of real beauty shared with far too many people. Whilst he found a shady tree to hide under, I climbed up with the divers to gaze into the mesmerising 45m deep hole with its multicoloured water. You would never know it but diving and swimming were forbidden!

Making a hasty retreat we were glad to make it safely back to the main road.

If you want to see more of Albanians crazy roads including the Llogoraja Pass watch this episode of Top Gear. Happily we didn’t meet the same fate as James May and lived to drive onwards to the Stone City, Gjirokastër…

2 thoughts on “Hitting the road”