From Gjirokastër we followed the river Vjosa through first wide open plains where farmers brought their sheep and cattle to drink its water and then through narrow gorges and over rickety iron bridges to Përmet, our home for the night. 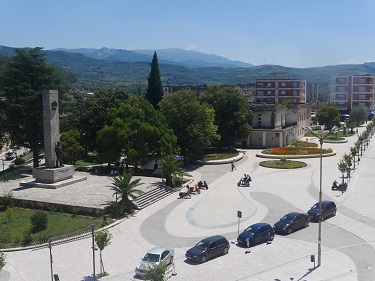 Arriving in the midday heat Përmet’s gleaming white stone square was just too red hot and we retreated quickly to the cool of our air conditioned room in the former turizmi, a Communist era hotel built for the (very few) foreigners allowed into Albania but mostly for touring Albanian cultural or sporting groups. Now upgraded to include en suite, air conditioning and cable TV our room still had enough of the austere to evoke its former life. And it had a great view of the town square to watch modern life in Përmet go by. 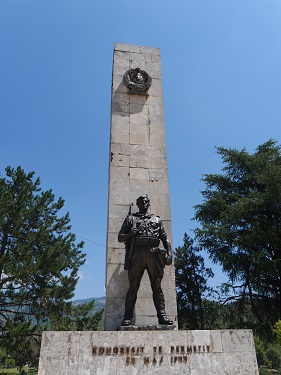 One of the town’s famous sons is Socialist Realist sculptor, Odhisë Paskali. His work is found in Gjirokastër and Tirana and here, looking out over the town square, is his Unknown Partisan, a celebration of Përmet’s important role in Albania’s history. The town was the place in which the Congress happened after liberation marking the start of the new Communist government.

Albania’s conflicted relationship with its recent history was evident here. In stark contrast to the proud Partisan in the square, the war memorial to the fighters was very forlorn. This was something we saw time and time again in towns and villages – sad, crumbling memorials to those who gave their lives to free their country from foreign occupiers only for future freedom to be constrained in ways they could never have imagined. 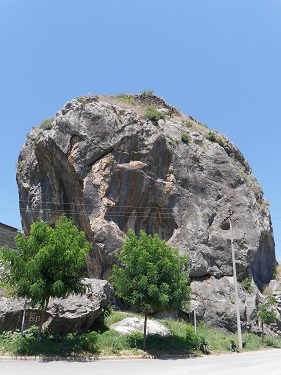 Cooled down sufficiently by the post Communist air conditioning, we had a walk along the river to the Town Rock, a huge boulder that looked as though it had appeared out of nowhere. It was possible to climb it via a metal staircase but with the sun still beating down we decided against it. There were pretty flowers everywhere but no sign of the roses for which the town is famous. 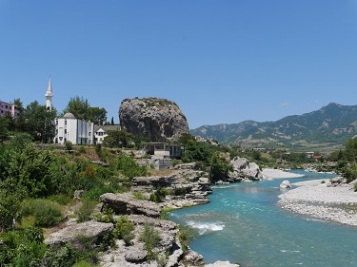 Instead of climbing the rock, Stefan chose to climb down to the river in an effort to cool down. 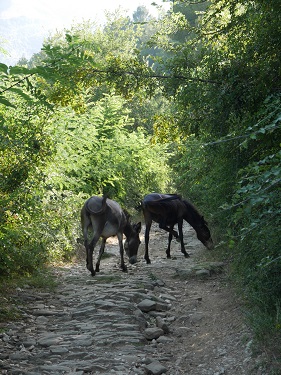 Once the sun was much lower in the sky we set out for a walk to Leusa, a village outside Përmet with an old church. I say outside but I should say above. It was a very steep climb up a prime example of Albania’s B roads. There was evidence that vehicles did make it up there (quite how we are not sure!) but we saw only a donkey, horse and cow. 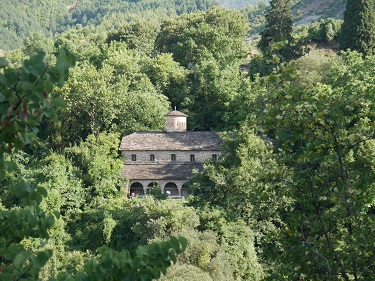 Nestled in the trees we found the church 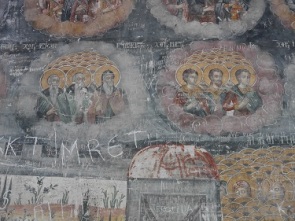 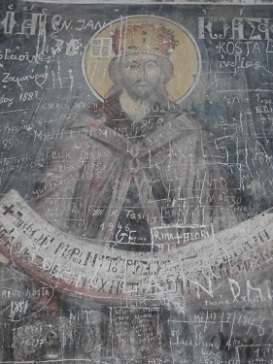 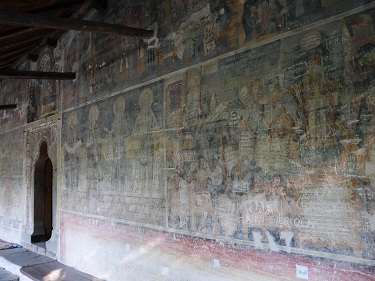 with its bright gallery of frescoes graffitied over through the centuries. 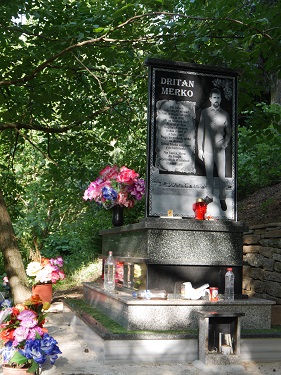 The ancient church was surrounded by a small graveyard of much newer graves demonstrating that life, and death, in the village still goes on.

Tiny paths led from the church into the trees where houses hid but we left the villagers in peace. On the way down Stefan stopped to feed the cow until its owner appeared and led it away. 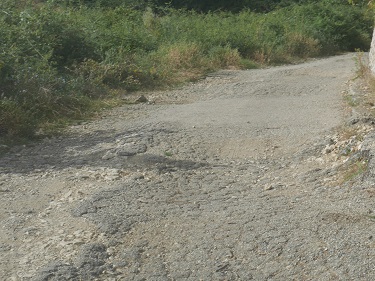 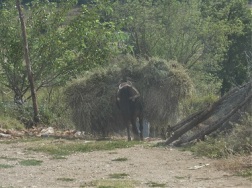 From Përmet we planned to visit the thermal springs at Bënja, put on our swimming things and hit the rural roads again. Turning off the main road we followed another pot holed road for several kilometres, the surface deteriorating the further we went. Fearing for the car our plan was again thwarted by Albania’s roads. We’re not sure we wanted to sit in the hot springs anyway! The air temperature was in the 30s. 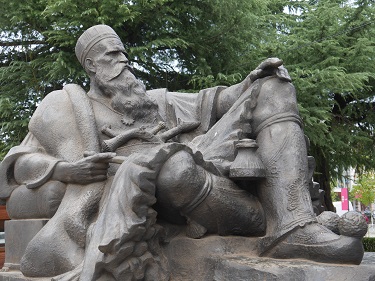 So we bumped our way back to the main road and carried on to Tepelene, home town of Ali Pasha. We found him reclining in the town square in front of the turizmi. 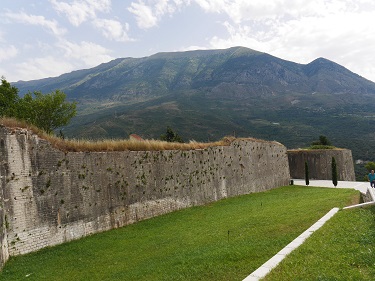 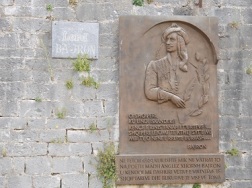 Ali Pasha rebuilt the castle at Tepelene and made it his secondary home. He also built a bridge across the river. There was a “Byron was here” plaque on the wall. Stefan commented “he got around that Byron“! In more ways than one, I thought. 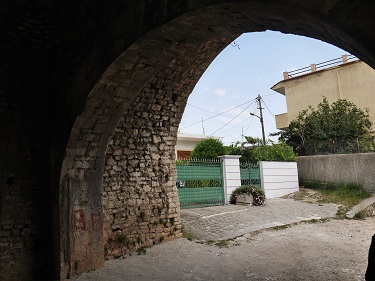 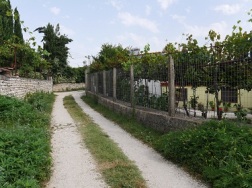 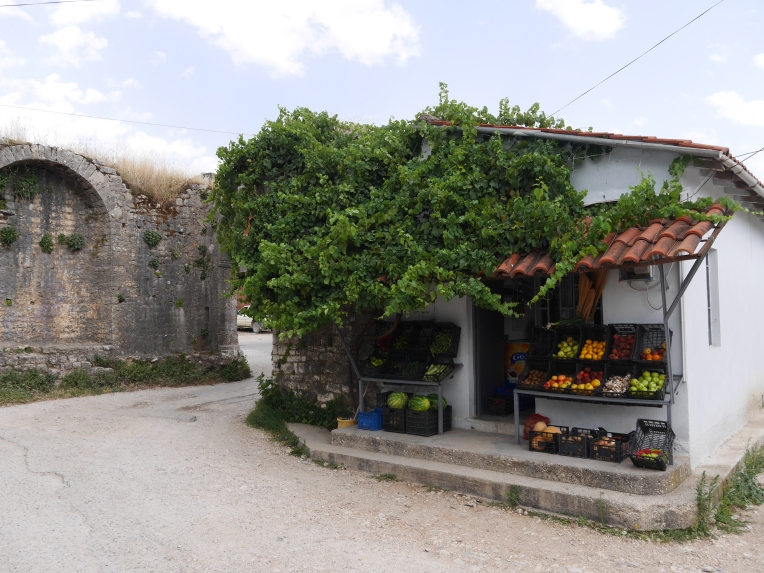 Inside the thick castle walls we found a maze of tiny streets full of houses and gardens, even a tiny fruit and veg shop. So full of praise for Ali Pasha’s castle at Palermo, Stefan declared this one very disappointing indeed. I quite liked how life was still going on inside its walls.

The views down to the Vjosa and Ali Pasha’s bridge from Tepelene were beautiful and we also found a gorgeous donkey sheltering under the castle walls.

After stopping for another fine view of the river, driving up a hill we were flashed by an oncoming car. We couldn’t work out what this meant. Perhaps warning us of a speed trap? So Stefan slowed down. We have form for speeding in the Balkans having been stopped in Croatia five years ago!

Coming over the brow of the hill we could see the traffic police had set up a check point and sure enough we got pulled over. The officer had no English and we had even less Albanian. We handed him Stefan’s driving licence and the car’s papers. He was trying to tell us something we couldn’t understand so in the end he reached into the car and turned the headlights on. Apparently it is a requirement in Albania to have your lights on at all times. We were lucky to avoid an on the spot fine. Smiling a lot and pleading ignorance works wonders we find! He sent us off with a friendly handshake. From then on, we made sure we kept the lights on. 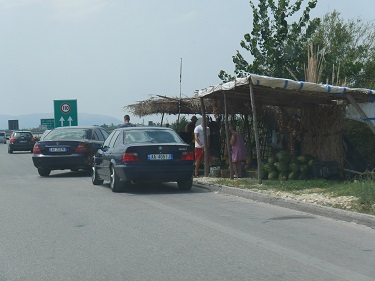 Then to our joy and relief the road turned into a dual carriageway for the first time. Being Albania this was not without its hazards. On the feeder lane a melon stall proved a popular draw to drivers who simply parked up in the road to grab one! Once we negotiated the melon shoppers we had several miles of lovely clear road with easy overtaking in front of us to continue our road trip through Albania…

2 thoughts on “Along the Vjosa river”