After the bright lights and big city of Tiranë we headed through Albania’s flat, agricultural heartlands and field after field of corn to the ancient city of Berat.

As in Gjirokastër, we had booked ourselves in a guest house in one of the city’s ancient houses that rose vertically up the cliff topped by the castle. Leaving the car parked beside the river we climbed staircases and steep paths to reach it right at the top of the area called Mangalemi.

From there we had a great view across the rooftops and to Gorica, the Christian quarter, on the other side of the river. 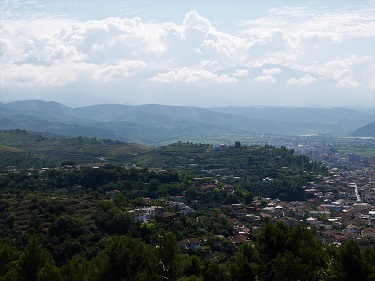 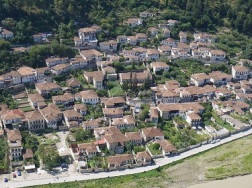 There were, however, better views from the castle once we had climbed all the way up a very steep and exhausting path. Mount Tomorri was just visible in the cloud. 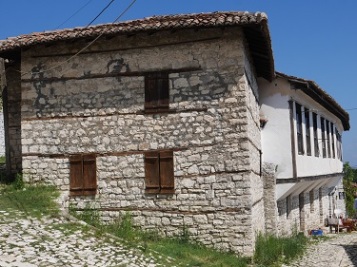 The castle was another very much lived in one with stone houses and cobbled streets. 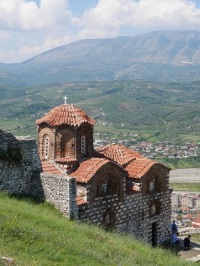 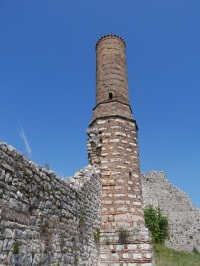 It was also home to two Ottoman era mosques, the White Mosque and the Red Mosque, now very much in ruins. There were once 42 churches up there but only 8 remain and those were shut during the Communists’ atheism campaign in the 1960s. 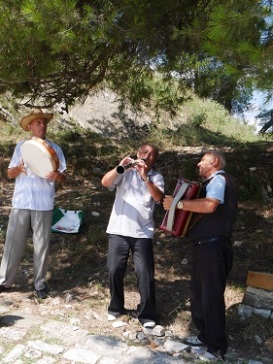 We found a gentler path back down from the castle passed some local musicians who played us on our way. 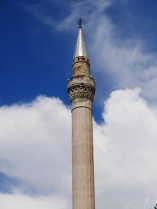 In Mangalemi quarter we found more mosques and the remains of the Pasha’s palace. 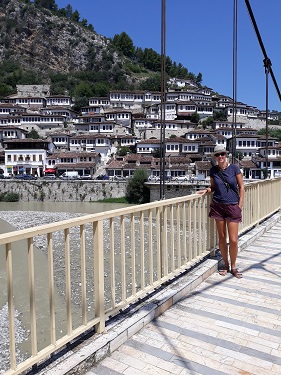 Before we left we crossed the river to Gorica quarter for the view back across to Mangalemi. Our visit to Berat was short but atmospheric. It felt as though not very much had changed there for centuries. Our time in Albania was drawing to an end too. 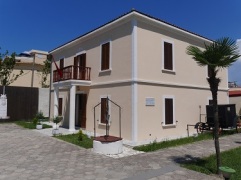 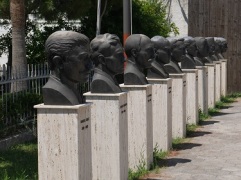 With just one day left with the car we had time to explore a much more modern city, Vlorë, just up the road from Orikum.

Vlorë was the birthplace of an independent Albania. In November 1912 independence was declared there and the two headed eagle flag raised in the square. An enormous Socialist Realist statue of the protagonists now stands in the square, proud flag-bearer at the top. (Today the city’s football team is named “the flag-bearer” and play at the stadium just down the road.) Leader of the independence movement, Ismail Qemali, set up the first parliament in a modest house right by the port and surrounded himself with those who had fought alongside him. His grave, in Independence Square is topped with the statue of a warrior.

Engulfed by a huge building site we found the house which was once the Labëria Patriotic Club set up to promote Albania’s culture and language in the build up to independence after years of Ottoman occupation. Women signed up to learn to read and write, taught by Marigo Posio who is remembered in a nearby park. 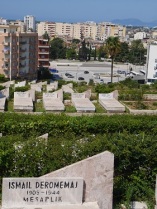 The price of freedom from Italian and German occupiers was remembered high above Independence Square with a cemetery for the People’s Heros and Heroines. We couldn’t help thinking it was a good thing that Qemali died in 1919, long before the regime that curtailed the culture, art and religious freedoms his movement fought so hard for.

These historical reminders aside, Vlorë is now a sprawling city of high rise blocks and modern shops, bars and restaurants. We were able to replace our electric hob and fill the car with bags full of groceries at the supermarket, enjoying some of the city’s quirky street art on the way.

Glossing quickly over Vlorë’s most recent history as the centre of mafia activity in Albania, the city is above all a very popular beach resort with hotels and beach front bars and restaurants stretching all along the bay around to Orikum, where we headed back to Pintail to get her ready to move on again…

One thought on “Berat and Vlorë”