One of the many activities available during a Licata winter are cooking lessons and as Christmas approached a series of festive baking classes started. Aptly named Sweet Sicily they aimed to introduce us to some of the island’s favourite sweet treats. On two consecutive Saturdays I joined a small group from the marina in making the winding journey up to the home of Mariella and her family high on the hill overlooking the town.

Surrounded by a large garden Mariella grows many of her own ingredients and there were baskets full of almonds, walnuts and citrus fruits. One week we arrived to find that she had made quince jam.

My first lesson was making taralli, glazed biscuits from the Agrigento area of Sicily typically served at Christmas.

Here is the recipe if you’d like to give them a try too. The ingredients are eye-watering for several reasons. Firstly, the quantities of sugar are frightening. They love things sweet in Sicily. Secondly, the recipe called for ammonia. We felt sure that this was a translation issue! Thirdly, you’d need to have a very big family or a lot of friends to share the sheer quantity of biscuits this recipe made.

Mariella’s son, Orlando, whisked up the egg whites which would make the biscuits lovely and light, defying the sheer amount of sugar in them. Claire grated the lemon peel which went into both the biscuit dough and the glaze. 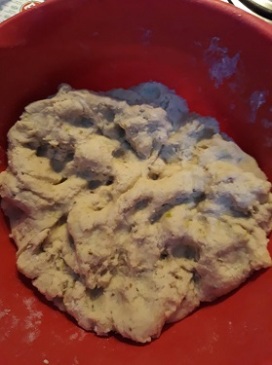 The dough combined the flour, sugar, milk, aniseed, lemon peel and butter. And then Mariella added a packet of a white powdery substance labelled ammoniaca. Phew, we thought, this looked more like bicarbonate of soda which was far preferable to ammonia! Before the dough was ready for making into biscuits the egg whites were folded in. The traditional shape for taralli is a knot but we also made skinny finger shaped ones.

The biscuits were baked in the oven for 15 minutes during which time there was a strong and distinct smell of ammonia in the small kitchen. Turns out ammoniaca is an ammonia based form of raising agent. We just hoped it didn’t taste like it smelt in the oven.

Once cooked the glaze of one whole kilo of sugar, water and lemon peel was liberally applied. Mariella chastised us for not dunking the biscuit sufficiently. 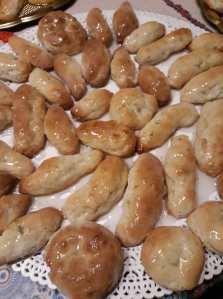 Once the sticky glaze had set we could try these shiny, light biscuits subtly flavoured with aniseed. We took my share of the bounty to share with our friends in Marina di Ragusa when we visited the next day. They disappeared remarkably fast!

On my second week we tackled Sicily’s ubiquitous cannoli, the cream filled tubes found everywhere at all times of the year.

This was a much more complicated, time consuming recipe involving the making of the scorcia biscuits and the ricotta cream filling but still involving the requisite quantities of sugar required by Sicilians and their sweet teeth. 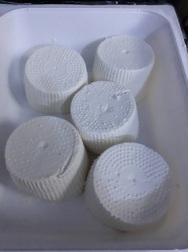 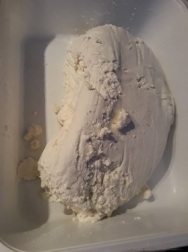 Whilst the biscuit dough sat in the fridge for a while it was time to make the ricotta cream. The ricotta had already sat draining in a rack overnight but required squeezing in a cloth to get rid of the remaining water in it. Under the watchful eye of Mariella’s daughter, Angelica, we each took a turn at passing the cheese through a sieve. In the quantities we were making this was very labour intensive!

Into the cheese went lots of sugar, some grappa, cinnamon, corn starch and, with great enthusiasm from Orlando, two bags full of chocolate chips. 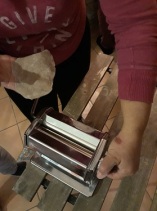 Ricotta cream done our attention turned to making the scorcia. With many hands making light work of rolling out small circles of the dough, Mariella then expertly put them through the pasta maker to get them millimetre thin. Johan and Orlando then had the job of rolling the discs around the metal moulds that would keep them in shape during frying. 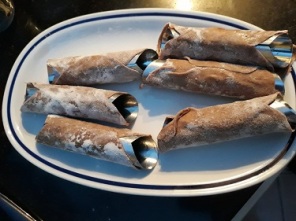 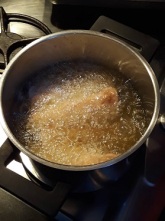 The thin dough was then fried in peanut oil for a few minutes before emerging golden and crisp ready to have the mould carefully extracted. 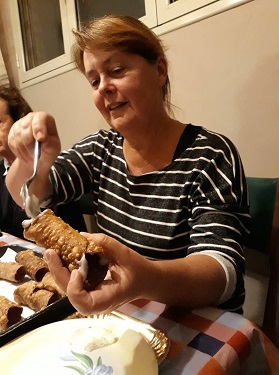 The last job was to fill the scorcia with the cream. This was harder than you’d think. We had to be careful to fill one end without the cream falling out of the other! Finishing touches of a sprinkle of pistachio crumbs and icing sugar completed the recipe.

Once filled the cannoli has to be eaten before the cream makes the scorcia go soggy so Stefan and I make light work of ours for dessert when I returned home.

Discovering these two recipes has given me a healthier respect for these Sicilian delicacies. They are truly sweet treats to be succumbed to only occasionally or your teeth will rot and your belt shrink!

One thought on “Sweet Sicily”