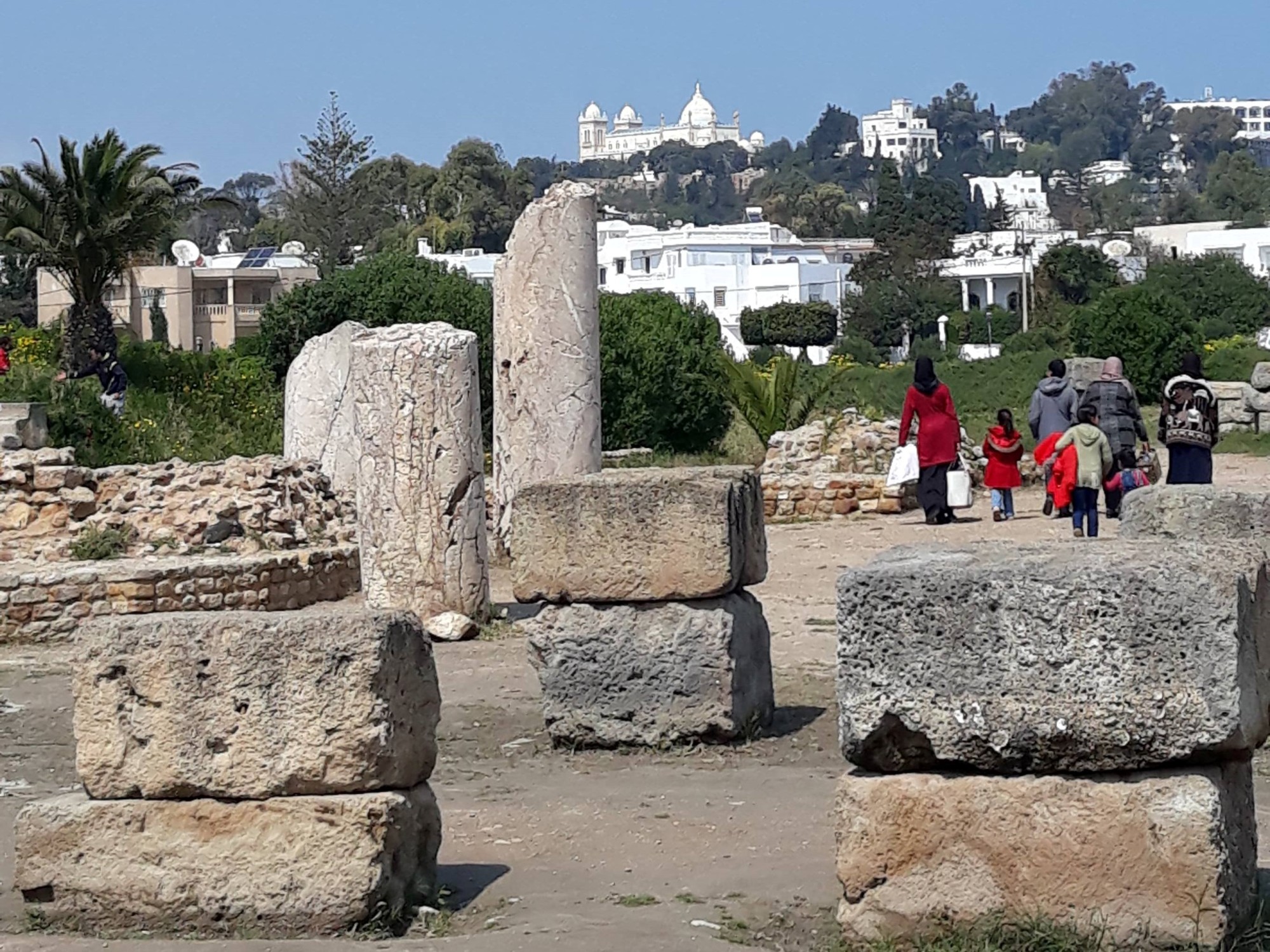 In Sicily I had foolishly and prematurely promised Stefan no more rocks. There, if truth be told, with its rich Greek and Roman archeological treasures, we had probably exhausted both our tolerances. In the past two and a half years we have undoubtedly seen some of the best the Mediterranean has to offer. Yet I knew that Tunisia offered sites which could complete our circumnavigation of the sea’s great historical empires and that we just couldn’t leave without seeing them.

On our literally lightening visit to Rome we had seen the Colosseum from the outside only and so as we were practically passing on our return from the desert how could we not stop at El Jem to visit the third biggest colosseum of the Roman world? 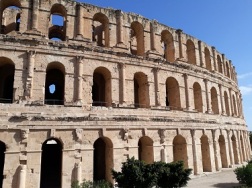 Towering above the modern town the colosseum once had capacity for an audience of 30,000.

The sense of scale was obvious from the vaulted corridors circling the arena. We could walk through the underground passageways that held the poor animals and gladiators doomed to appear before the crowds 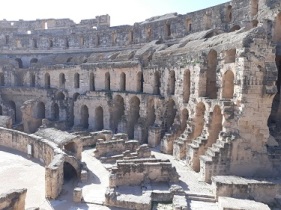 and, like them, came blinking out into the sunshine where the sheer size of the auditorium became clear. The height of many tiers meant that those at the back will only have seen tiny specks on the stage.

Impressive as the colosseum is, built in 230AD it just isn’t quite old enough to peak our interest or teach us anything new. So we headed further north to discover more about that rival empire, Carthage, which we had first encountered way back in Cartagena. 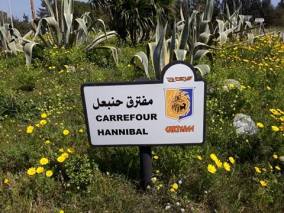 It’s not possible to avoid meeting Carthage’s great general, Hannibal, at every turn throughout Tunisia. There are streets, shops, boats, even roundabouts named after him. We had a vague knowledge of his ill fated crossing of the Alps with his elephants but in the somewhat surreal Chak Wat theme park in Tozeur we had started piecing together more about his campaign to conquer Rome. So we had to visit the ancient city from which it all began. 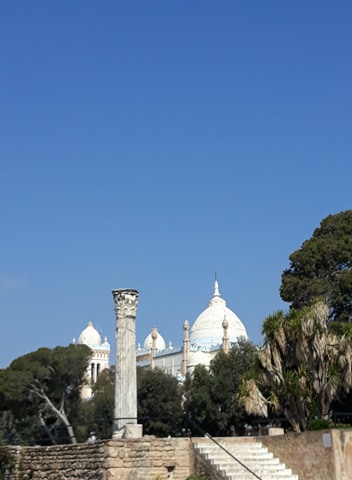 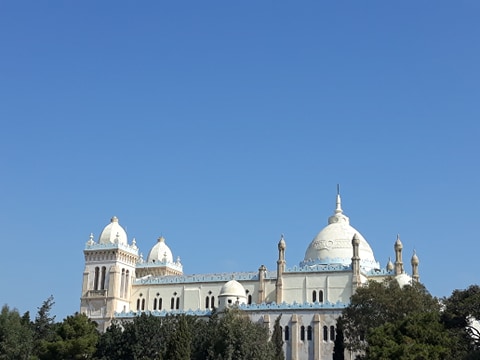 Having got the train from Tunis we found ourselves not on ancient streets but amongst the mansions of wealthy, modern Carthage. It was hard to imagine its past so we climbed Byrsa Hill to what was once the heart of the city. The original Carthaginian temple was razed by the Romans who instead built their Forum, Temple and Capitol buildings at the site. Nothing but foundations and the odd column remain. Now an incongruous, deconsecrated, Gothic cathedral sits in their place. 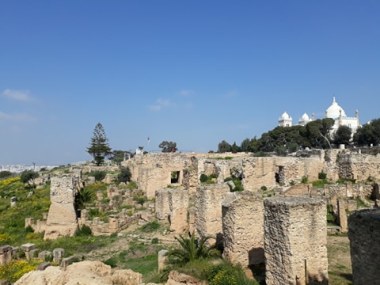 Surviving the Roman equivalent of the bulldozer, beneath the summit are the ruins of a Punic residential quarter where you can clearly see the layout of houses, shops and cisterns dating from the time of Hannibal in the 3rd century BC.

The sites of Carthage are spread far across the area surrounding the hill. At its foot we found what is left of the Roman amphitheatre. Descriptions in our guide suggested little remained amongst the undergrowth so we were pleasantly surprised when we walked into the oval stage. 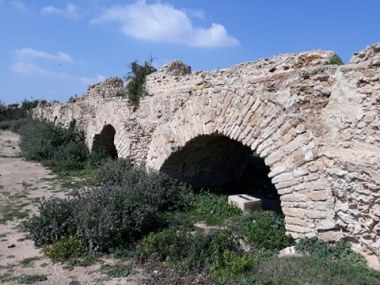 A short walk further were the remains of La Magla cisterns, a 1km reservoir that held Carthage’s water supply piped by aqueduct from mountain springs. 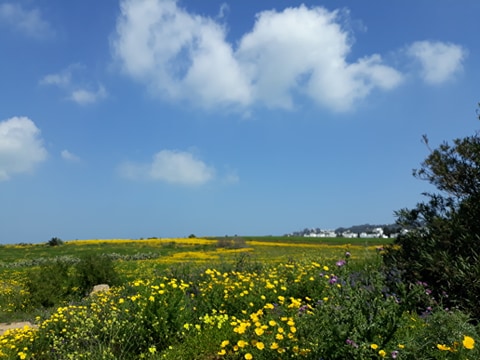 We walked and walked and walked in search of more of Carthage’s past and after time in the dusty south and Tunisia’s towns were pleasantly surprised to find flower filled meadows. The rain of recent days had definitely given them more life.

Stefan wanted to time travel back to the 20th century with a visit to the US War cemetery which lies amongst these fields. Nearly 7000 Americans are remembered for giving their lives in fighting against the Germans and Italians during the Tunisia campaign of World War II. Total Allied casualties and losses totalled 76,000 but were less than a third of those of the Axis forces. Unfortunately, it being Sunday, the cemetery was shut and although very friendly, the security guards at the gate were not minded to let us in.

Having by now walked about 15km, we confess to getting back on the train to return to the coast and what remains of the Punic ports, the base for Carthage’s 220 strong navy. 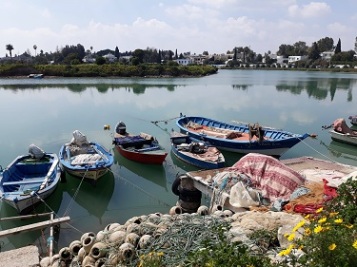 Now only fishing boats moor by the shore and Tunisian families picnic amongst the ruins. And there Stefan had really had enough. He sat, without irony, on one of the ancient port’s foundations and looked miserable. “What’s wrong”, I said. “I just can’t see any more rocks”, he answered.

Whilst I too had grown weary, this was most unfortunate timing. There was just one last place I wanted to see and it was only up the road – the macabre Sanctuary of Tophet. 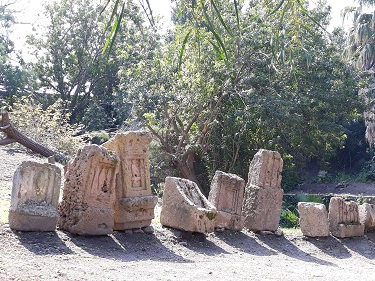 Leaving Stefan sitting in the shade I had a quick wander around what could be the site of Carthaginian child sacrifice. 20,000 tiny urns containing the ashes of newborn babies up to 4 year old children, as well as some lambs and kids, were found marked by tiny headstones. Biblical references as well as Greek and Roman historians tell of the practice but given that they also paint the Carthaginians as the uncivilised bogeyman there could possibly be a much more innocent explanation.

And isn’t that a bit rich anyway, coming from people who enjoyed watched the bloodbath of man versus lion in their colosseums?

Whatever the truth of what went on in the Sanctuary, having seen Carthage even I was done with rocks.

And I really do mean it.