This blog post contains a lot of moaning about the weather for which we are sorry (but we are British so we can’t help it!) 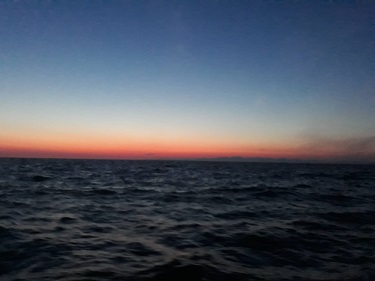 We left our berth in Calvi on Corsica at midnight. The forecast for our crossing to Imperia on Italy’s north coast was good. We needed enough wind to counter the swell on our beam and not far off the coast of Corsica we found it. With 20 to 25 knots of wind we made good progress through the night, watching the moon set on one side of the boat and the sun rise on the other. 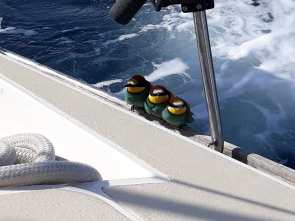 During the day we had some unexpected visitors. 50 miles off shore we were joined by these three beautiful birds. Time and again they would land and perch, huddled together on the guardrail or toerail, until one of us moved and scared them off. We had no idea what they were. With their black stripe across the eyes and bright green and blue plumage they looked like ostentatious bank robbers! Consulting our trusty RSPB bird book we eventually identified them as bee-eaters. Like the swallow that joined us on passage to Sardinia it is just incredible to see such tiny birds so far away from land and an absolute pleasure to offer them a little respite from their long journey. Eventually, when they were rested enough they flew off and didn’t return.

Without our stowaways we arrived in Imperia at 4.30pm and, after a while driving around the huge marina working out where our mooring was, we moored bow to the concrete quay.

Being British we are fully aware that complaining about the weather is a national trait and we try very hard not to. In fact until this year we have had no cause to whatsoever. (Although we do admit that we have sometimes grumbled about the heat in July and August!) However, there is no denying that since leaving our winter berth in March the weather has been horrible. Before this year we could almost count the number of days of rain we have had on this journey on the fingers of one hand. Since leaving Sicily we have had rain, and lots of heavy, persistent rain, nearly every day.

Living on the boat is so much more difficult in the rain. The odd bit of rain is not so bad but as we essentially live outside when it rains for days on end we are stuck in the confines of a boat that suddenly feels very small. Simple, every day chores like walking to the shops mean getting drenched. There’s no way of getting laundry dry. We were by now completely over listening to rain on the hatches and were starting to question what was going on with the weather in the Mediterranean. It wasn’t just our bit of the Med. Friends still in Greece were complaining about the cold and damp. It was grey and miserable and lots of rain and wind were forecast for the coming days.

So, on cue, as soon as we arrived in Imperia the rain started to fall again and the wind howl.

And then the second thing happened that nearly tipped us over the edge.

That night the rain and wind continued. At 3am we were woken suddenly by a big jolt. The anchor on the bow was hitting the concrete quay. We both leapt up to get ready to pull the boat back from the quay. Stefan turned the key to the engine.

The engine would not start and without the engine we had to use brute strength to pull the lines to keep the boat further away from the quay. It wasn’t perfect but it would do until we figured out what was wrong.

Stefan spent the day with his head in the engine bay, cursing the absence of space to reach the parts he needed to but ultimately, successfully tracing the problem back to the solenoid on the starter motor. 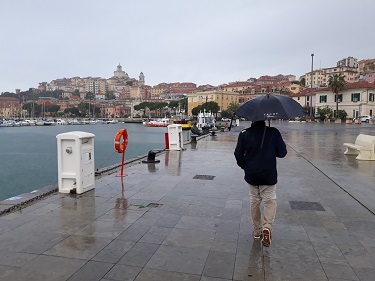 It’s funny how these often simple failures test us so much. We had felt the same in Syracuse when the heat exchanger broke. Except there it wasn’t raining for our endless walks in search of help. If we were anywhere familiar and could speak the language fixing the problem would be so simple. We would know where to go, who to talk to, be able to speak to them and be able to get the parts we need quickly. But in Imperia, in the pouring rain, we set out on the long, wet trek to find a replacement solenoid. We tried a couple of car repair shops in the old town to no avail but one gave us the address of a shop all the way across the other side of town. Armed with the address and Googlemaps we trudged through the deepening puddles to a shop that simply did not exist. We found another who gave us directions to another who didn’t have exactly what we needed but did have something that Stefan thought might just do the job. As we had walked about 10km to find it and it was only €8 we took a punt that it would be ok.

It was ok and once fitted the engine started perfectly again. It was a huge relief and we were able to pull the boat back from the quay properly.

Losing the engine when we really need it is something all sailors fear. The fact that it had decided to not to start when we were safe enough in our berth in the marina was inconvenient and annoying but we couldn’t help wondering what would have happened if it had stopped working when we really needed it.

And it would have been so much easier to cope with if it had just stopped raining!

The wind and rain continued for days. Eventually the rain stopped encouraging the kite surfers out onto the surf. 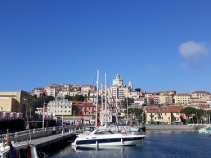 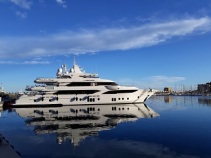 and we feel bad that our last days in Italy won’t hold such happy memories because it’s a country we have grown to love a great deal.

When the sun did finally came out, as we planned to leave, Imperia was a pretty, colourful, typically Italian town and the huge motor yachts in the harbour gave us a taste of what the French Rivieria had in store for us…

One thought on “It’s not all sunshine and roses”