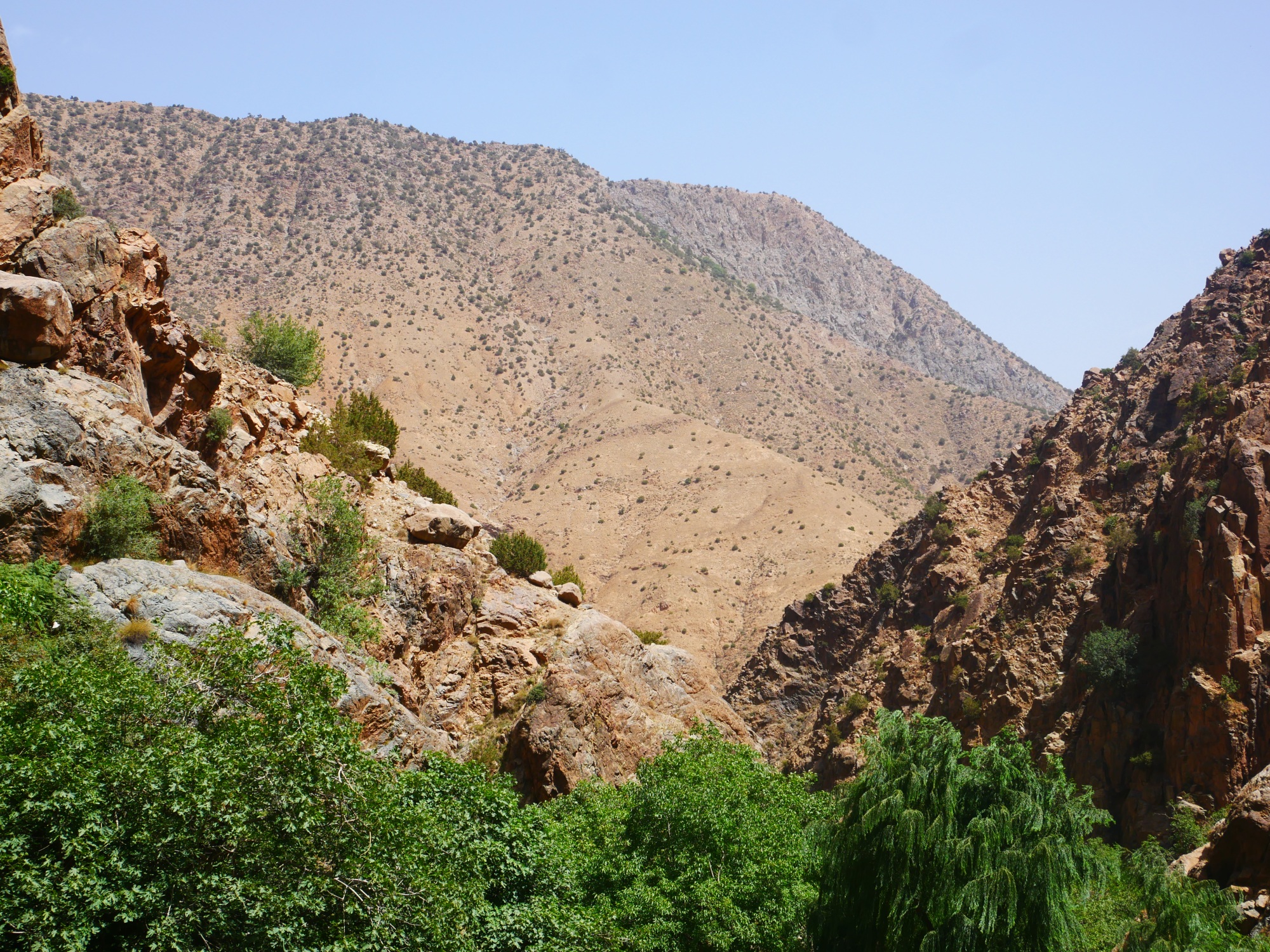 We tried to put Stefan’s sore throat down to the heat following a long journey in an icy air conditioned train but by Sunday morning, the day of our planned excursion to the Atlas mountains, he was feeling decidedly fluey. Concerned that he could get worse and, if it turned out to be the dreaded Covid-19, that we might get stuck in the city for an unknown length of time, we made the decision that to be on the safe side he would return to Pintail in Salé and take a test whilst I, still feeling perfectly well, would carry on with our plans.

I’m not averse to a bit of solo travel. Of course it’s nice to have company and shared experiences but there is definitely something heightened in the experience of travelling alone. I would not, for example, have missed surviving the terrifying night bus down one of the world’s most dangerous roads to the Chittagong hill tracts in Bangladesh. (Being hoofed off the bus to be interrogated at the border of the disputed territory was slightly more worrying!) Nor hiring a driver and guide to take me deep into a national park in the Rift valley in Ethiopia. (There my concern for my safety only piqued about two hours down an isolated track when we stopped to pick up a third man and his gun.) Those experiences and the places they took me to gave me memories I will remember forever. They are responsible for my love of bougainvillea and zebras respectively and I would not have missed them waiting for a travelling companion.

I had never felt unsafe in Morocco and I wasn’t going to miss the opportunity to see the Atlas mountains if only for a day. So waving Stefan off to catch his train I clambered into the car with Yas, my driver for the day. As we drove out of the city, we chatted about our respective experiences of the pandemic. He had headed to Dubai to work and where learning English had opened new opportunities for work back in Morocco. Yas is of Berber heritage but Marrakech born and raised. He had spoken only Arabic growing up and not learnt either his parents mother tongue Berber nor colonial hangover French. “I couldn’t get the hang of it. English is much easier!”

From the front seat of the car it was very hard to imagine the mountains existed. In the summer heat haze and dust we drove into an entirely flat and parched landscape. Yas assured me they were there. We just couldn’t see them yet.

And then, on the horizon, shapes began to appear out of the haze and we started to climb towards them, passed pottery stalls and small villages perched on the hillside.

We stopped in a layby to look out of the Ourika Valley towards the higher peaks and down to more towns taking advantage of the fertile flow of the river.

We continued up, through more pottery and more vertical towns.

In one of those settlements, built from the iron rich rock of its surroundings, Yas told me that in 1995 a devastating flash flood had destroyed all the buildings close to the river and killed over 100 locals and visitors. He reassured me that they now had an excellent early warning system for any increases in waterflow higher up the river!

We stopped to visit a typical Berber home. Stefan would have appreciated the engineering that used water from the river to keep the household in flour and cleaning rituals.

Recycled apparatus replaced sheep’s stomach as a butter churn and I was able to sample some wonderful fresh baked bread with local olive oil and honey.

Further up the valley, we stopped again at Setti Fatma, whose river front restaurants are popular with city dwelling families escaping from the heat for the day. At 1434m above sea level it is cooler here then in Marrakech, although still hot enough to make me ponder the sense of setting out for even the short hike to the Seven Waterfalls at midday.

Although I could in all honesty just have followed the crowds I decided to hire a licenced guide, Jamal, for the hike and I was very glad I did. Not only could he take the photos of me that proved I had actually been but his gentle encouragement was everything me and my vertigo needed to make it up what was less of a hike alongside the waterfalls than a vertical 500m rock scramble up them! He was also excellent company and announced immediately that no subject was out of bounds, religion, politics, ‘anything you like’. He was young, bright and opinionated, a lover of books and interested in the world.

We stopped the first of a few times to take in the views and to let me catch my breath (Jamal was half Berber, half mountain goat!) He told me a little about life in these mountain villages where he had grown up. It would not be unusual for 25 to 30 people over sometimes 5 generations to live together with a cow and probably a goat and some chickens thrown into the mix for added overcrowding. Berber households are overtly matriarchal. It is the grandmother who rules the house. It is she who choses the bride for her grandsons and, he said pointing out all the satellite dishes, she who chooses what the family watch on their tv.

We climbed up the steep course of the waterfalls alongside whole families with said grandmother in tow. At the top, over a much needed cold drink from an ingenious fridge cooled by the icy waterfalls, we did get on to politics and Jamal was not going to hold back in his views about Morocco’s current regime, views that had already got him into trouble with the police. Safe to say that what appears to the world to be a very modern constitutional monarchy seems to be anything but. For the second time that day I was sorry Stefan wasn’t there as we had the kind of conversation he would have loved. Jamal even referenced George Orwell’s 1984 in just the same way Stefan would when he said sometimes he wished he didn’t know quite so much.

I returned with Yas through the lush valley, stopping briefly at an argan oil cooperative to buy a jar of what is known as Berber Nutella, a mixture of argan oil, almond and honey (which I can report is delicious on toast). Back in Marrakesh, before dinner I received the text from Stefan I didn’t want to receive “Positive first test!” He was feeling more than a little rough and had taken to his bed.

So alone at our riyad I tucked in to the three course meal we had planned for our return from the mountains and decided I should cut short my Marrakech adventure and return north and take a test myself.

One thought on “Alone to the Atlas mountains”