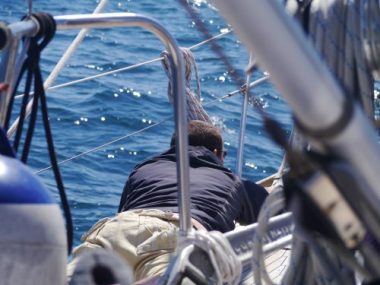 We actually did some sailing between Nazare and Peniche! While Sue took a well earned rest we had our sails up immediately we left the harbour. The Stormschnitzels would be proud and we enjoyed the novelty. With the sails up the swell is so much easier. Stefan took a relaxed approach to watching for fishing pots.

We were greeted in Peniche by the smallest spot on the pontoon to squeeze into but a reception party from the Faiths and Stormschnitzels to help us in.

Any other week Peniche is a quiet fishing town 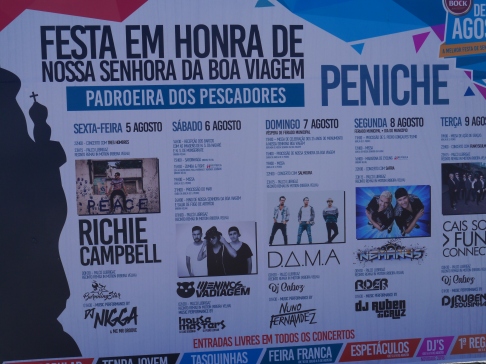 but it was clear as soon as we arrived that it was a town ready to party. A huge stage set up on the quay beside the marina was already pumping out the best of Portuguese dancehall and house music! And it didn’t stop until 3am every night we were there. 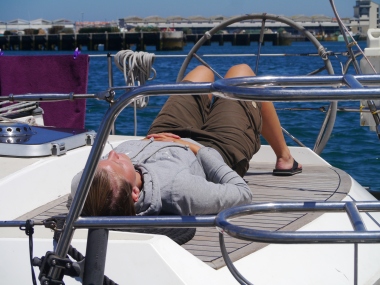 Whilst the festival went on around us we enjoyed some lazy days around the boat with the Germans, including a late night run to the churros stall for an incredibly sweet treat. 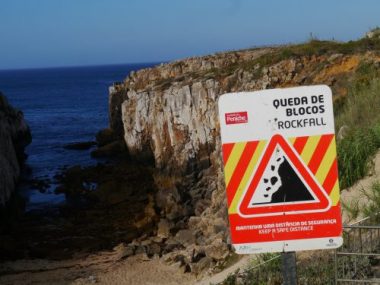 Despite a late night entertaining on Pintail, we got up early for a walk around the headland to Cabo Carvoeiro. 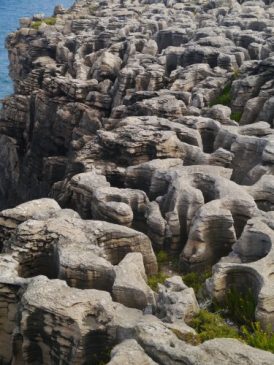 We had seen the rock stack at the cape from the sea but close up the rock formations were spectacular. Stefan took a much closer look than I. If you look carefully you can spot him here.

All along the coastal road we found teetering towers of rock ready to topple into the sea. We returned to town via the market where at last we found some mushrooms but still no chilli peppers! 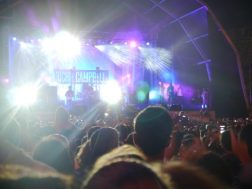 That evening I went out with half the Faiths and half the Stormschnitzels to enjoy the delights of Ritchie Campbell and his Portuguese reggae. He must be very popular in Portugal because he drew a big crowd and of all ages including grandparents with their small grandchildren. 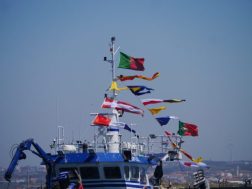 The next day however, was the big event – the blessing of the fishing fleet with all its accompanying chaos in the harbour. We had first seen this back in Baiona without really understanding what was going on. This time we were more prepared. 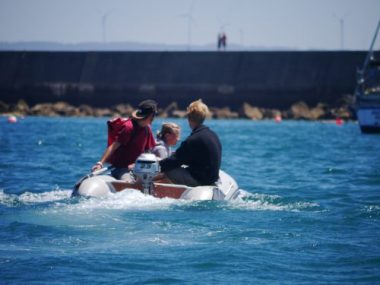 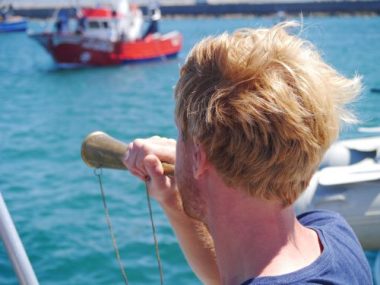 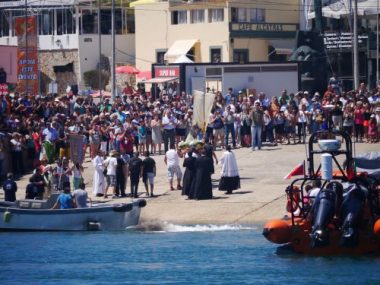 and returned to Pintail to watch them return for the blessing – Jan heralding them back with horn.

Incongruously the festival timetable included a Zumba class on the big stage! Some of the routines were the same as those from my class back at the church hall in Wanstead but I declined to join in. 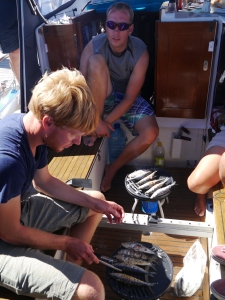 Instead Michael and I queued with the masses for a 2 Euro bag of enormous sardines. Joined by another German couple and crammed onto Faith much like sardines, everyone but me ate until they never wanted to see another sardine – which on this coast is very difficult indeed! 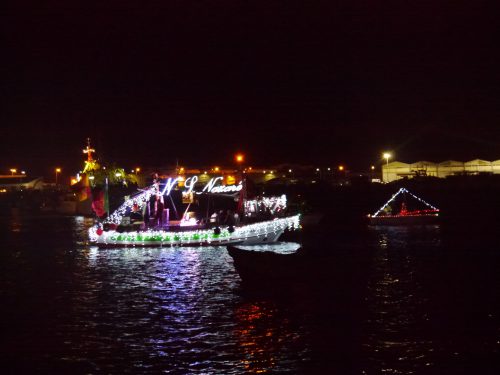 Come nightfall the boats processed out of the harbour, tinsel having made way for fairy lights accompanied by a brass band playing the hits of Amy Winehouse, Adele and even The Cure. We stayed up way passed our bedtime for the firework display at midnight and the music raved on until 3.30am.

From our berth looking towards the harbour entrance.