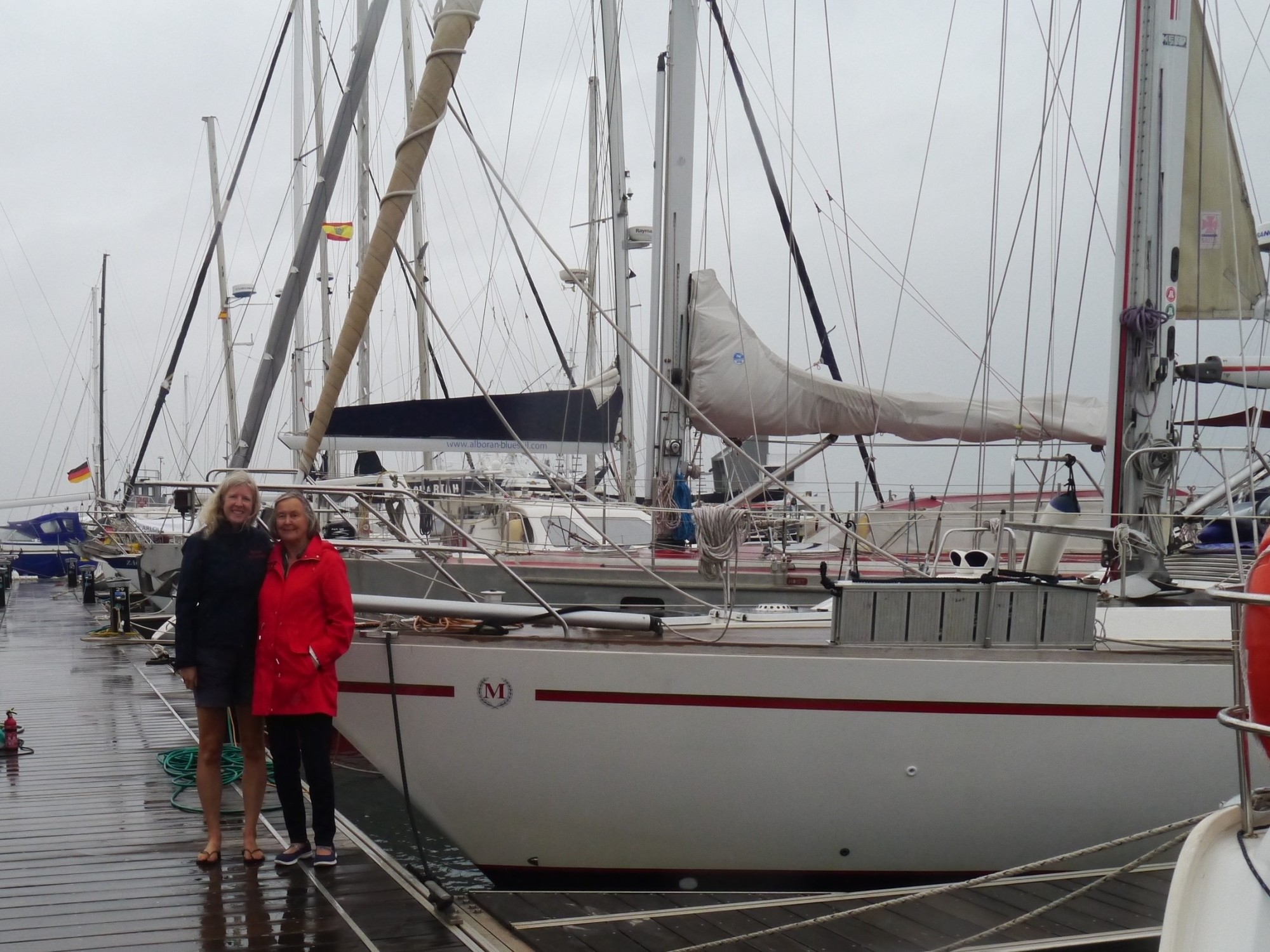 On a drizzly day in La Linea, one on which we had decided against our planned hike up the Rock of Gibraltar in favour of a much needed cleaning day on Pintail, we heard a knock on the boat. As Gibraltar is one of the main starting points for those heading to the Canary Islands and across to Atlantic we had become used to young would-be crew stopping to ask where we are heading and as I went up on deck I assumed this was just another.

But it wasn’t. It was Jackie Pinder, Pintail’s original owner!

We knew she and her family lived and spent time in Spain and had planned to be in touch to try and make plans to meet but this was such an unexpected and slightly overwhelming surprise.

Jackie had been following our blog and had worked out we must by now be in the area. Having nothing better to do with her Sunday but no idea where we actually might be she came in search of us. Trying Alcadeisa Marina first before planning to head into Gibraltar, she hit the jackpot.

Over a coffee and a couple of hours on board, it was wonderful to hear so many stories from Pintail’s early days. Jackie was able to fill in so many of the gaps in our knowledge of Pintail’s previous journeys in the Middle East, the Mediterranean and along our own route through Spain and Portugal. It turns out Pintail really did know where she was going! We were able to show Jackie the charts they had left on board with their original waypoints alongside ours.

Jackie told us all about their own adventures in Pintail: how they got into trouble with the Omani Navy trying to shelter from a storm and lived on water and kitkats from the navy stores for the next few days; about mistaking aircraft lights for other yachts on the approach to Ibiza; how Pintail spent a winter in Chipiona whilst the generator was fixed; and a story about a very daring sail inside the shallow waters at Cape Trafalgar.

We learnt that we are not Pintail’s first liveaboards and that she and Brian had lived on board whilst he worked in Dubai. We learnt too that we were not the first to fit a washing machine in the sail locker. We were able to thank her for fitting the air conditioning which must have been so essential in the Middle East. She told us that the saloon cushions had been reupholstered in Estepona, just up the Costa del Sol from Gibraltar and where she now has a flat. Stefan took the opportunity to ask Jackie to help us some of the mysteries we had found on board and the bits of equipment whose purpose we had not been able to fathom! 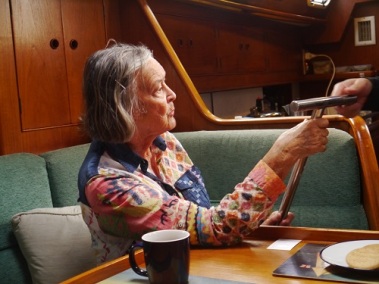 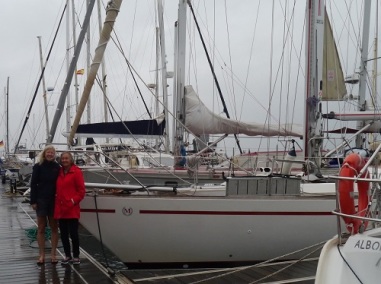 Poignantly, Jackie described their final sail on Pintail into Chichester Marina at night on 5 November under a full moon surrounded by fireworks. We know now that Pintail really does seek out fireworks wherever she can in memory of that night.

We know only too well that a boat is not just a boat. It becomes part of you and your family. So it must have been very emotional for Jackie to be back on Pintail. It was certainly incredibly special for us to welcome her on board.

What an absolute privilege to meet you, Jackie – thank you so much for coming in search of Pintail. We hope to welcome you and your family on board again as we continue our journey into the Mediterranean.

We promise to have tidied up next time…

One thought on “A very special visitor”