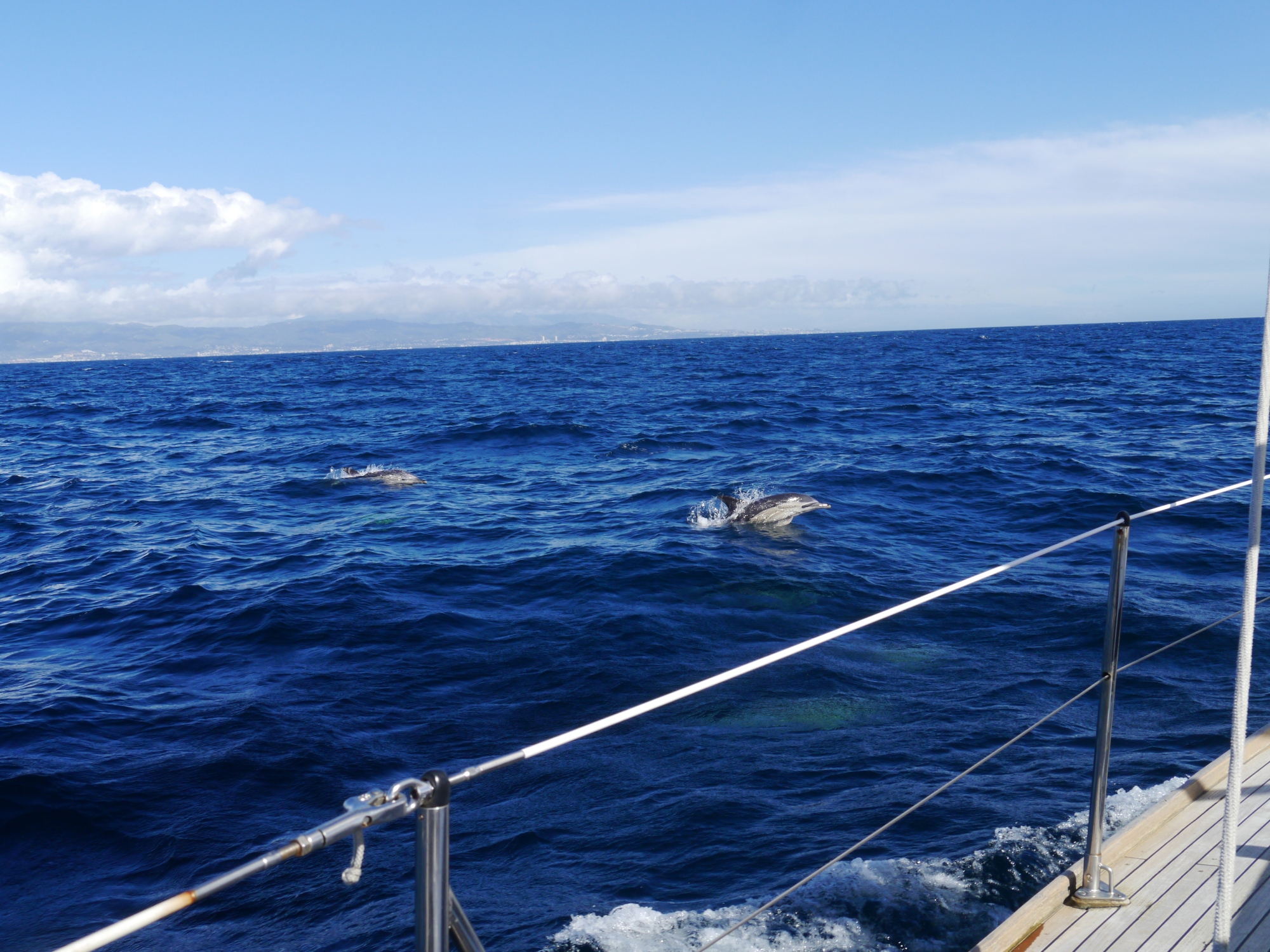 After a very British afternoon tea (Stefan’s Christmas present to me) and having stocked up on some tastes of home from Morrisons, we left Queensway Quay, Gibraltar in very British drizzle. Leaving after three months was harder for me than Stefan. I had made some very good friends at the gym and at the gardens and we were both very sad to say goodbye to Annemieke and Steve, our friends on the pontoon. 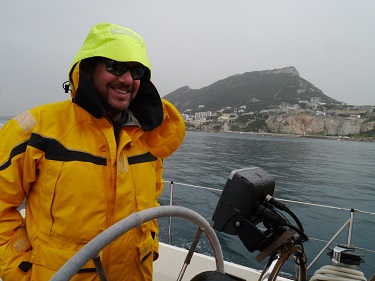 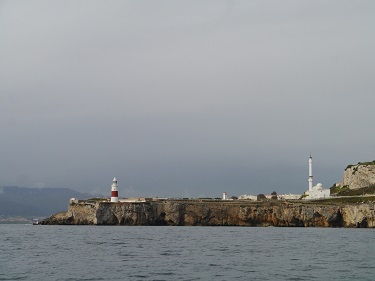 Stefan was, however, delighted to say goodbye to all the frustrations of getting parts and equipment through Gibraltar’s treacle of a system. The smile on his face said it all. We were both excited to be back on the sea again. As we rounded Europa Point we had the whole Mediterranean ahead of us ready to be explored.

Our first, short hop was to Estepona and we found it a lot more grey and damp than when we had visited it by road whilst Exploring Andalucia with the Olds.

Our short stay was brightened by another chance to catch up with Jackie, Pintail’s first owner and our A very special visitor from La Linea. This time we also had the chance to meet her daughter, Fiona and hear more of both of their tales of Pintail’s past adventures. 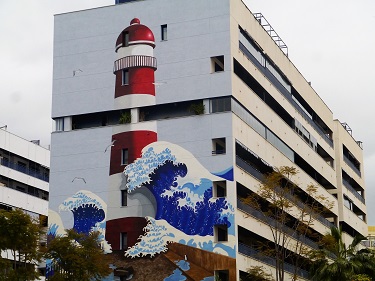 Jackie took us on a tour of some of Estepona’s giant murals and we spent the following day seeking out the rest. They certainly brighten up the concrete apartment blocks of the town. The fly fisherman mural makes perfect use of the perspective created by one estate. 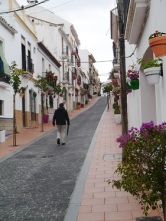 We explored the old streets of Estepona and Stefan proved that he had learned nothing from trying an olive off a tree in Croatia by picking a very sour orange from one of the many laden trees.

With time short before we needed to be in Alicante we decided on a series of longer passages up the coast. Our first leg was from Estepona to Almerimar, 120nm passed the resorts of Marbella, Fuengirola, Torremolinas and Malaga.

We hadn’t done a full night sail since July so were a little apprehensive. However, for the first time on this journey, on this passage our ratio of sailing hours to motoring hours tipped to sailing and we saw this as a good omen for our time in the Med.

It was even warm and sunny. We had dolphins for company and saw a turtle the size of a hubcap swimming far out at sea.

After our first night at sea, getting used to a watch system again and listening to new downloads of Desert Island Discs, the sun rose on snowcapped mountains. We were moored up in Almerimar before 9am. Almerimar marina wins the award for the cheapest marina of the trip so far at only 8 Euros a night and the shortest walk to the bar! 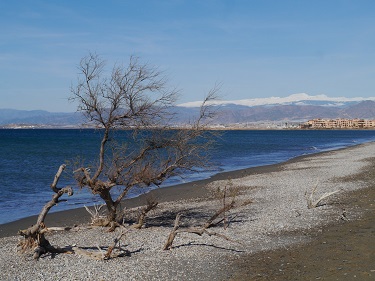 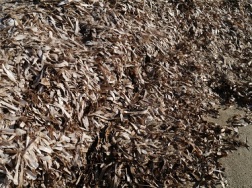 With high winds forecast we sat tight in Almerimar for a couple of days, enjoying warmer temperatures and walks along the beach. 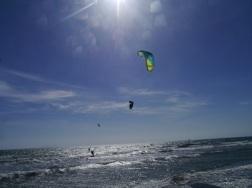 We watched kite surfers taking full advantage of the strong winds and found a hill to climb. 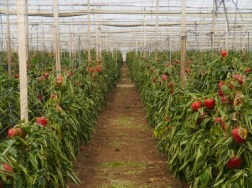 From our picnic spot at the fort at the top we had a view back to the snow capped mountains and the acres and acres of poly tunnels full of vegetables destined for a supermarket near you.

Our next passage to Cartagena and the Costa Blanca was another 120nm passage but, having waited out the strong winds, we had very little in the right direction and so had a long 24 hour motor through the night. I had the sunrise shift this time by which time it was completely windless and the sea was glassy and still. With the sun up we could start to see Cartagena’s dramatic scenery. 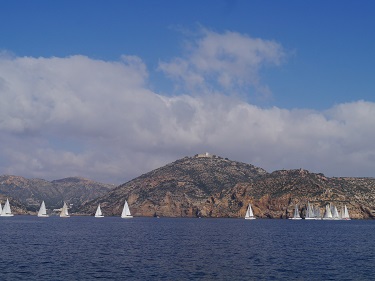 We were welcomed into Cartagena’s wonderful natural harbour by a yacht race and its many fortifications.

We spent a week exploring the Archaeology and architecture of Cartegna. Surrounded by fortified hills in every direction, it is a fascinating town to visit and gets a well earned blog post all of its own. Its layer of history from the modern to the Phoenicians literally peel away before your eyes. 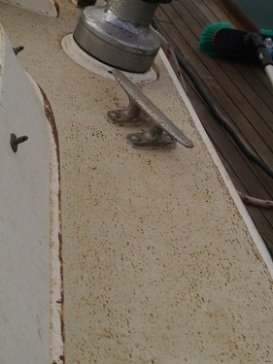 We were almost grateful for the Calima wind which kept us there so long. But it brought with it eerie skies and a lot of Saharan sand which when mixed with rain made a lot of mess on Pintail. We spent our last day there cleaning her but are still finding sand everywhere. 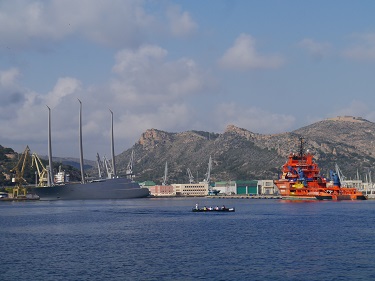 There was great excitement but very little approval from the sailors in the marina at the arrival in Cartagena of SY A, the Philip Starck designed, Russian Oligarch owned super yacht. At 143 metres long she is the largest sailing yacht ever built and has eight decks and an underwater observation window in her keel. She certainly dwarfed everything in the harbour and her grey hull looked quite at home with the navy boats alongside. We think she is rather ugly and would choose Pintail over her any day!!

We had a little bit of drama trying to leave Cartagena. Just outside the marina we ran into a sheet of plastic which wrapped itself round the propeller. Thankfully it didn’t stop it altogether and we were able to limp back into the marina. Stefan gamefully pulled on his wetsuit and jumped in. He jumped out equally quickly. “We need a diver”! 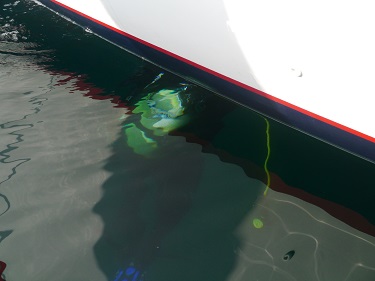 Happily for us we didn’t have to look far. Our near neighbours down the pontoon, Chloe and Olivier, run a diving school from their catamaran and Olivier got kitted up and in the water for us. Not only did he remove the offending plastic for us, he also gave Pintail’s bottom a thorough once over, scraped off some barnacles and replaced an anode (1)  we would never have known was missing. He reported that the coppercoat is doing its job and keeping unwelcome creatures from living on the hull. Better still, he made us this video to show us what was going on down there!

Stray plastic wasn’t the only hazard we encountered on passage to Torrevieja. These fish farms stretched for miles just off shore and despite being marked on the chart were very confusing. From further away through binoculars they looked like someone had put a fun fair in the middle of the sea!

But we arrived safely in Torrevieja, chosen for its proximity to Alicante airport and mooring fees half the price of marinas further up the coast. We needed somewhere safe and reasonable to leave Pintail whilst we returned home briefly for Julia’s wedding and to spend some time with Stefan’s dad respectively.

A concrete tourist resort on the Costa Blanca, we hadn’t expected to like Torrevieja but it turned out to be a lovely place to pass a few days either side of our trip home. We particularly liked this sculpture of the wife of a fisherman lost at sea, sitting on a bench looking out to the waves.

With much warmer temperatures (up to 28 degrees one day), it was time to get back out in the tender for a spot of birdwatching and seagull bothering. We added razorbills to our list of birds spotted. 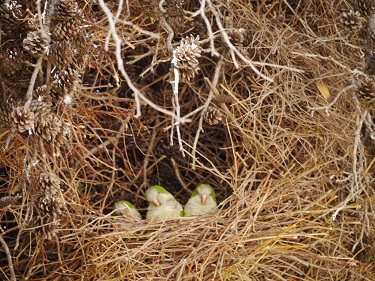 In a park near the beach we also added parakeets to the list. 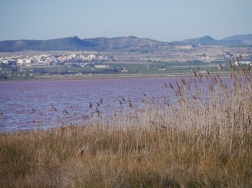 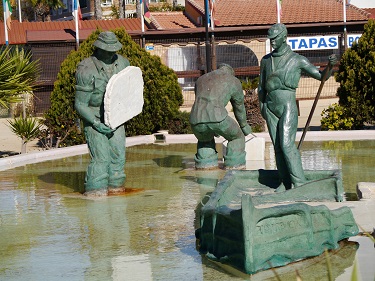 Alongside tourism, salt is big industry in Torrevieja and it is home to the “pink lake”. It looked a rather muddy pink to us when we took a walk to see it but if you look at the satellite view on googlemaps you can see how pink it really is! On seeing the huge piles of salt at the edge of the lake Stefan said “that’s a lot of fish and chips”!

It wasn’t all sightseeing and sitting in the sun in Torrevieja. Jane and Martin made another flying visit primarily to help us refurbish Pintail’s leaky windows. In their one day with us Martin demonstrated how to remove and reseal one window. We tested it with the hose and as I write it is getting a good test with some torrential rain in Calpe and so far, so good, no drips! Thank you, Jane and Martin for yet more help and guidance and for travelling further to give it. One window down, three to go. 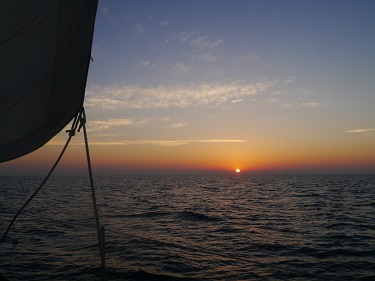 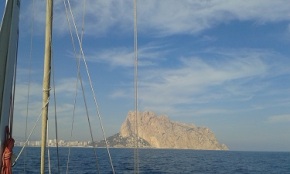 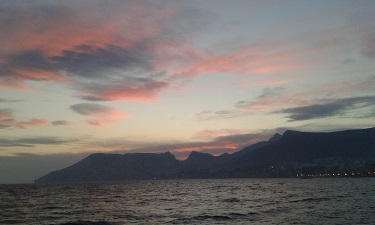 Our final passage along the Costa Blanca was planned as a day sail up to Calpe where we were to anchor for the night before setting off for Ibiza. We left Torrevieja at 5.30am, enjoying sunrise and some spectacularly mountainous coastline. We were anchored up outside the harbour wall in Calpe by 4.30pm. We started this stretch of the journey under a limestone rock so it was fitting to finish it under one too.

We were excited to try out Pintail’s new anchor. It seemed to set well and in the clear water we could even see it reassuringly digging into the sand but, despite our new Anchor Lite app telling us that we weren’t moving anywhere, sleep was fitful.

We didn’t plan to step onto land in Calpe or explore the eastern end of this coast but the weather had other ideas….

Selfie, messing about in the tender in Torrevieja

(1) an anode is a bit of metal that sacrifices itself to corrosion and protects the very important bits of metal under the water, like the propeller.