With Jim, Lisa and Ellie packed into a taxi to the airport, our thoughts turned to getting moving again. Alghero had been a wonderful base for a month and a great place to get to know Sardinia. We were sad to leave but our itchy feet and a good weather forecast told us to was time to say goodbye to the cobbles, the gelaterias and the coolest marineros in the world. 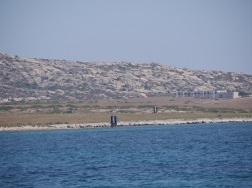 We were heading to the northern coast of the island, in search of the Maddalena Islands and the promise of beautiful anchorages. To get there, and save ourselves about 30 extra miles, we had to navigate the Fornelli Passage, a shallow and narrow cut through between Sardinia and the island of Asinara. The passage and its leading lines (1) were very well marked on our charts and the GPS but nonetheless it was nerve-wracking watching the depth gauge fall down to about one metre under the keel. The white sand on the sea floor meant we could see just how close we were to it. We got to see some of the buildings on Asinara that were until recently one of Italy’s toughest maximum security prison up. Not a bad view from your cell! 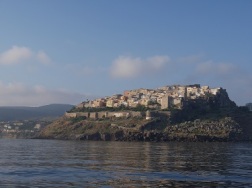 Our first stop was Castelsardo and our introduction to some more of Sardinia’s colonial history. The town was built by a Genoese family as a defensive fort, improbably perched on the rock. Later it was taken by the Spanish and named, Castel Aragonese. Wrestled back by the Piedmontese it assumed its current name. Approaching the harbour we mistook the cathedral’s campanile for a minaret. 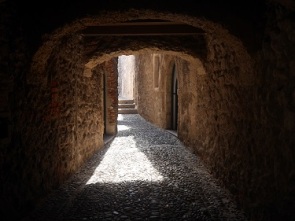 A castle on a hill? Of course we had to climb it! At the top we found a wonderfully shady 12th century fort, a museum of the traditional basket making of the local area and, literally, a battering ram! In the streets of the old town we saw women making and selling their baskets in their doorways.

We took the opportunity to replace the basket we inherited from Pintail’s previous owners and which we use to keep our bits and pieces in with a lovely new, Sardinian one. 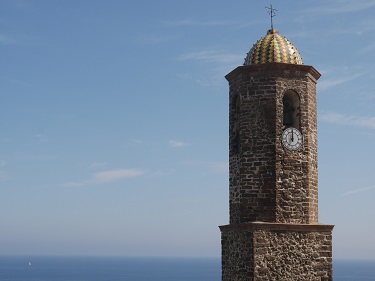 The tower we had mistaken for a minaret in fact started life as a lighthouse but later became the campanile for the cathedral. Inside another of the town’s medieval churches we found the rather grisly Lu Cristu Nieddu, or Black Christ.

Our sunset walk gave us lots of gorgeous, glowing views over the town and the harbour.

With strong winds forecast to coincide with our planned stay in the Maddalena Islands we did something we are getting very used to now and changed our itinerary. 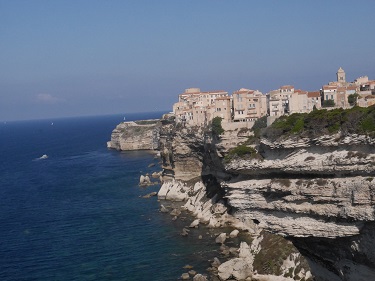 We decided to leave Italian waters for a couple of days and head across the Bonifacio Strait to the Corsican town of Bonifacio. We’re getting used to seeing castles and towns perched on cliffs and pondering the effort required by the original builders. We’ve seen it in Portugal in Sintra, in Spain in Guadalest and in Sardinia in Bosa, amongst many other places, but nothing quite prepared us for Bonifacio. A former Genoese town, like Castelsardo, Bonifacio’s haute ville appears to melt into or out of the layered white limestone cliffs. It is hard to see where cliff ends and buildings start, with many built precariously on the overhanging rock. The harbour entrance is spectacular with high cliffs on both sides and fjord like inlets. We were, however, slightly distracted from the view by the huge ferry, speeding tourist boats and erratic charterers in the narrow channel. Even the marinero was hurtling around, completely ignoring the 5 knot speed limit. Getting into our berth was very stressful, for Stefan particularly at the helm. Never a good introduction to a new place! 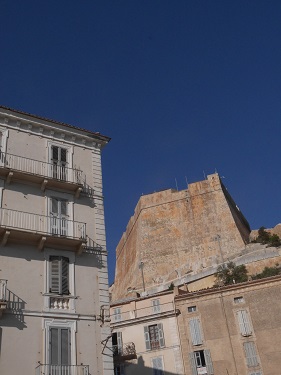 Once we had recovered from our arrival and having switched our minds to thinking about using French instead of (our much more limited!) Italian, the lure of the climb to the haute ville we stared directly up at from our berth proved too much. From the walls of the fort we had a great view back down to Pintail. That’s her, bottom left with the dinghy hanging off her bow. 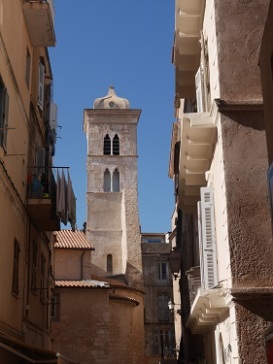 Inside the old town the high buildings with their balconies and shutters were recognisably French but there were also hints to Bonifacio’s changing rulers over the centuries. 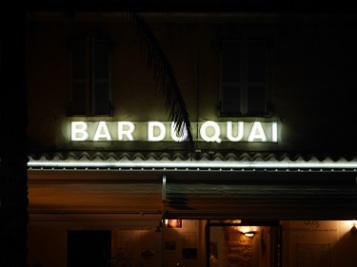 Wandering around offered glimpses inside. The bars and restaurants around the harbour were full of French tourists, surprisingly similar to British ones with their sunburnt skin and raucous drinking. 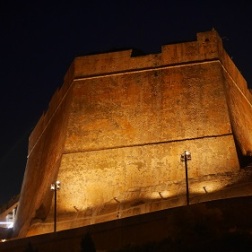 Just to ensure that we really knew we were on French territory, at night the fort was illuminated blue, white and red.

With temperatures rising our walks are getting earlier and later in the day, so before breakfast we climbed up towards the haute ville again but instead turned left to walk along the cliffs for views back towards it, across to Sardinia and down to the beautiful clear water. 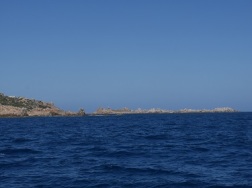 With some very strong winds forecast in a few days we had agreed to sit them out with our new friends Suzie and Mike and their Moody SV Toy Buoy back on the Sardinian coast in Santa Theresa di Gallura. With Pintail safely tied up in the marina we got to see the Bonifacio Strait’s reputation in full force over the next couple of days with crashing waves outside the harbour entrance. Whilst waiting for the weather to pass we restocked the boat, finding a supermarket that not only delivered our shopping but also brought us back with it! We also sought out a local blacksmith to do a repair to one of the davits (1) which had broken on the crossing from Bonifacio. We also had lots of time to hang out with Suzie and Mike and plan our next adventure with them into the Maddalena Islands ….

Selfie, with Suzie and Mike and their patio doors!

(1) navigating using leading lines means lining up two posts, markers or landmarks so that one obscures the other and you know you are going on the right heading

2 thoughts on “Towards the Bonifacio Strait”