After a wonderful week in Napolean’s Elba and after our change of plan, we turned south instead of north and towards an unexpected month in the Tyrrhenian Sea. We had loved Italy’s islands and were keen to see if the mainland would live up to them. Equally though, having not planned to turn that way, we had very few expectations. We didn’t even have a pilotbook!

Leaving Elba’s rugged mountains behind, our first impressions of the mainland were of a rather flat and often industrial coastline. Our first passage south was a bit longer than initially planned. After over a week of very light, if any, winds the forecast was for some very strong winds in a day or so and mid passage we decided against stopping in Santa Stefano and pushed on to just south of Civitavecchio. Arriving in an unknown harbour in the dark is never our choice but we made it safely in at about 10pm. Better still, Suzie and Mike from SV Buoy, our excellent companions on our Tyrrhenian journey, had arrived several hours ahead of us and Suzie had made a wonderful vegetable curry ready for our arrival.

Civitavecchio was a great base for our trip to Rome in a thunderstorm and to sit out the wind. Although Riva di Traiano marina was slightly uninspiring, the chandlery was probably the best we have found so far. Everything we asked for they had – replacement pipe for the forward head, camping gas and a Greek courtesy flag. Best of all, Stefan finally got an affirmative when he asked, in his best Italian, for a filtro carboni (carbon filter for the holding tank!). The one thing, however, they didn’t have a copy of the Italian Waters Pilot book which I desperately wanted to properly plan our time in Italy but they ordered it in for us and it arrived the following day!

With a short window in the unseasonally unsettled weather we hopped down to Ostia and the Porto Turistico di Roma to sit out another big blow. The two highlights of our enforced three day stay undoubtedly (and probably in this order for Stefan!): 1) finding a fantastic Indian restaurant, the perfect setting for a reunion with Claire and Del from SV Red Rooster and the first we had found since Mallorca (you can see how happy we were on Red Rooster’s blog!); and 2) finding the gem Ostia Antica for a thorough immersion into Italy’s Roman heritage.

Both Riva di Traiano and Ostia marinas reminded us of the marinas  in southern Spain –  vast amounts of concrete with dreams of being the destinations they never quite became. Whilst these two were full of boats and had a few shops, cafes and restaurants, perhaps only one in three of the concrete shells was occupied. 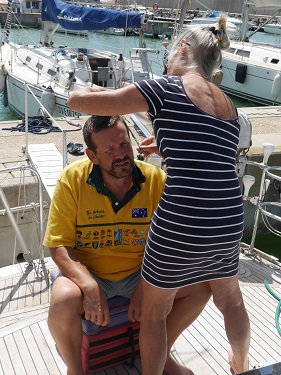 There was, however, no barber’s shop so Stefan took Suzie up on the offer of a much needed haircut. There is no end to her talents and he was much happier with the result than this photo suggests! 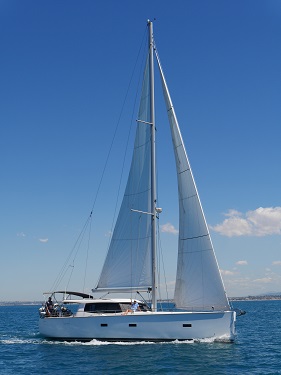 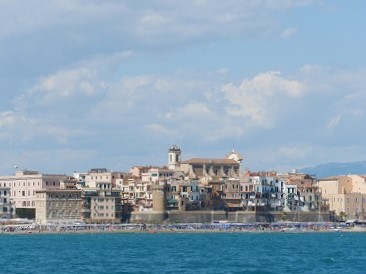 Our new pilotbook confirmed what we already knew – the Italian coast is a very expensive place to be in July and August. Prices for Pintail’s 14.2 metres could top 100 Euros for one night and safe anchoring opportunities are few and far between. To keep even remotely close to budget, we planned to take any opportunity we could find.

From Ostia we hopped another 30nm down the coast to Anzio where the bay between Anzio and Nettuno promised an anchorage perfect for a calm night before crossing to the island of Ponza. Photos of SV Toy Buoy suggest a lovely sail but we motor sailed all the way in the calm after Ostia’s storm. Arriving at 2pm we settled on the hook and had a whizz around the bay on the tender, steering clear of Nettuno’s firing range to the south!

The anchorage was very open and without wind to hold Pintail into the swell we bumped and bumped until at midnight Stefan had enough and decided we should up and head through the night to Ponza. Letting me sleep for a few more hours, I got the sunrise shift which slowly illuminated the rocky Pontine Islands. Negotiating the rocky entrance to Ponza in the early light with ferries and fishing boats already up and about, and with Stefan snoozing below, was a bit nerve-wracking. 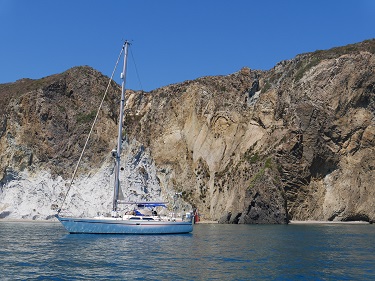 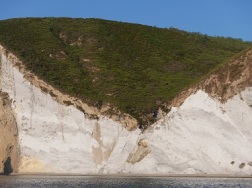 We anchored in the simply stunning Cala Inferno. Ponza is the crest of an old volcano and its geology like nothing else. We’ve seen incredible cliffs in Portimao, in Bonifacio and in the Maddalena Islands but this was something else. The white of the cliffs burned our eyes in the heat of the day, the yellow glowed gold in the evening light and the aqua marine water so clear that swimming from the boat was like being in a pool. It was reassuring to be able to easily see the anchor dug right in to the white sand.

We were not, however, alone in the anchorage and Ponza gave us our first taste of the craziness of an Italian summer on the water. Having arrived early it wasn’t long before we were surrounded by boats of all shapes and sizes – a water tanker, speed boats, sailing yachts, super yachts, even pedalos – all producing various amounts of noise and wash without a care. Watching anchoring techniques was entertainment in itself and we were grateful that most boats disappeared before sunset so we didn’t have to worry about them drifting into us. 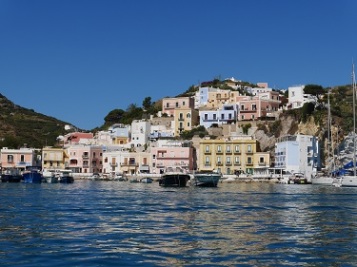 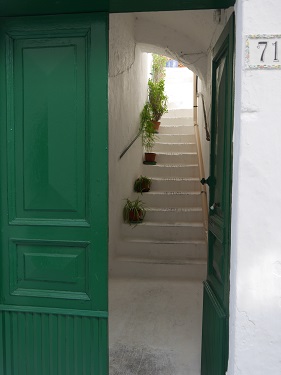 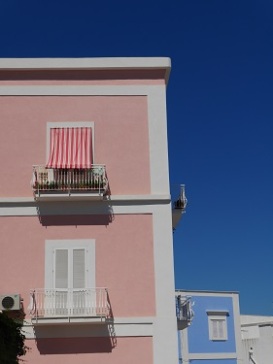 The tender ride into town was a chaotic dodge of small speedboats and playing chicken with the incoming ferry. Like Bosa and Castelsardo, Ponza’s town was a pretty, pastel patchwork of houses. Even the t-shirt seller and the café chairs had got the memo about everything being multi-coloured. 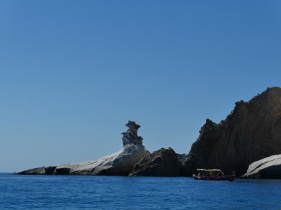 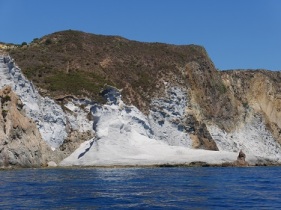 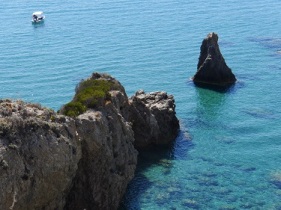 It was the natural beauty that really wowed us. The erosion of the cliffs by sea and wind created beautiful sculptures everywhere. We could have stayed longer than our two nights but there were other islands to explore. 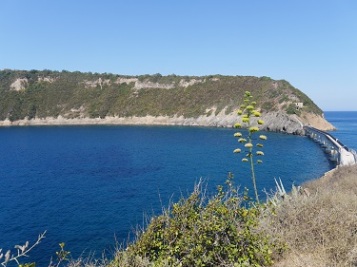 Anchoring is prohibited on the islands of Ischia and Procida, off the northern tip of the Bay of Naples, so we opted to go into the tiny harbour of Chiaiolella on the smaller Procida. We had one night on the rustic wooden pontoons of Procida Yacht Club. Procida is joined by a pedestrian bridge to the old volcanic crater of Isola Vivara. Unfortunately the gates to the island were firmly locked when we tried to visit. 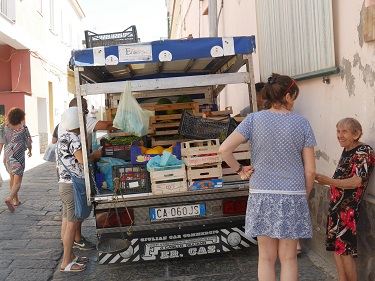 Despite being tiny, Procida produces a lot of tomatoes and a visit to its market stalls on the back of vans saw our fridge restocked with bags of gum-tingling local tomatoes and other fresh fruit and veg.

Our shortest passage to date in the Tyrrhenian Sea took us from Procida, passed its own pastel town and castle, back across to the mainland and to an anchorage tucked into the tip of the Bay of Naples. 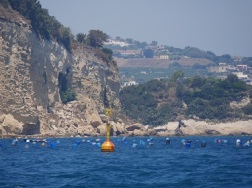 To get to our anchorage at Misena we had to negotiate the mussel beds that surrounded the entrance on both sides. Once inside we had to negotiate hundreds of small boats coming at us from all angles and seemingly oblivious to our attempts to anchor. All afternoon we watched as they sped passed, often within touching distance. 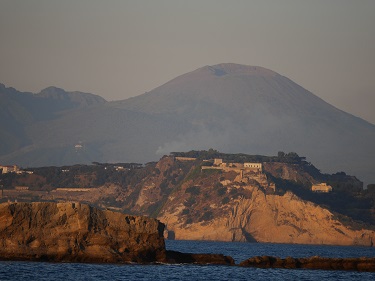 By evening the pesky little boats had mostly all returned to wherever they came from and as the heat haze gave way to sunset over Vesuvius, giving us our clearest view yet of its crater and the promise of more time in its shadow….

Selfie with Suzie and Mike on the tender in Ponza

5 thoughts on “In the Tyrrhenian sea: Part 1”