We had, of course, been to the Balearics on our way into the Med at the beginning of 2017. We had explored Ibiza, Mallorca, Menorca and tiny Cabrera by land and sea but had some very good reasons for including them on our way back out.

We have made some great friends on our travels and by some strange twist of fate a good few of them are to be found in the Balearics. Our friends Suzie and Mike from our adventures in the Maddalena Islands and the Tyrrhenian Sea ended up buying a house in Mahon on Menorca. After a very brief reunion in Greece last year we had really hoped to be able to park Pintail up under their new place in the bay unfortunately the wind was just not playing ball and blew us instead to Mallorca.

Our passage from Blanes was another long and gloomy one but, with her new sails, Pintail did us proud once more. Having found a fishing shop in Blanes Stefan had replaced the fishing rod which had gone overboard during our crossing from Corsica to Italy and he was this time determined to use it. Twice its reel whirred into action. Twice he announced “this is a big one!” Twice he very nearly got the fish on board. Twice, right at the last moment, the fish disappeared, hook and lure with it!

We sailed through the night again to reach Mallorca at first light at Soller on the northern coast. The sun was just rising above the island as we were reintroduced to its mountainous silhouette. We dropped anchor at about 6am in the anchorage and collapsed into bed. However, the swell creeping into the bay got bigger and bigger and was making life on board very uncomfortable. We thought about going on to the pontoon in the harbour but it didn’t look all that safe there so we decided to brave the swell back out at sea and head some distance round towards Andratx and, we hoped, better shelter. The conditions were horrible until we reached the island of Dragonera and turned the corner into much calmer water

and a wonderfully welcome anchorage at Cala Marmacen where we finally got some sleep and not a bad view.

The next day we sailed round to Palma Bay where we had the first of a series of reunions on the island. This one, however, was not with its inhabitants but with Stefan’s sister and niece, Lisa and Summer, who had also arrived in the bay that morning on board an enormous cruise ship moored in Palma. 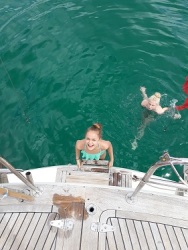 We found them on the beach at Cala Major and they joined us on Pintail for a drink and a swim. Summer and her friend were the only ones brave enough to get in the water. It was still too cold for the rest of us! It was a brief visit and when they went off to rejoin the ship to carry on to Marseille we headed back to a familiar anchorage where we would complete our Mediterranean circumnavigation. 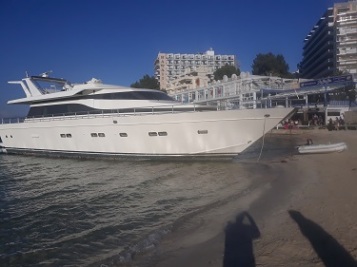 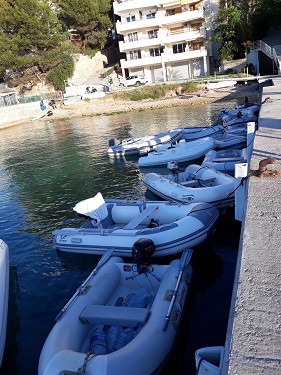 The large anchorage at Palmanova holds bittersweet memories for us. It is where we nearly lost Pintail on the rocks when we got caught out by some strong wind on April Fool’s Day 2017 but also where we spent some lovely times with our friend John and our Pintail family, Fiona and Fernando. On the basis that we had a lot more anchoring experience and lightening doesn’t strike twice (frankly we hope it doesn’t strike once!), we anchored off the holiday resort of Magaluf again. The anchorage was busier than when we were there first in early April and the dinghy had a lot of company at the quay! There was evidence of someone else’s misfortune at the mercy of the wind – a big motor boat washed up on the beach after a particularly nasty recent storm. 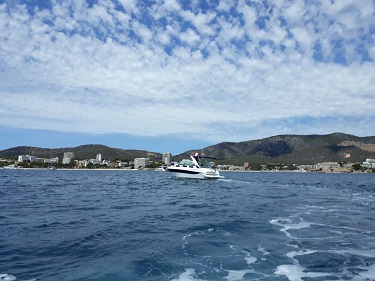 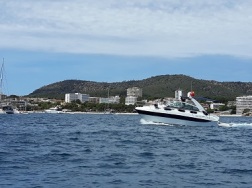 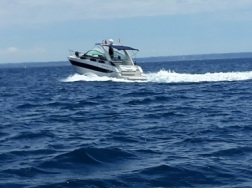 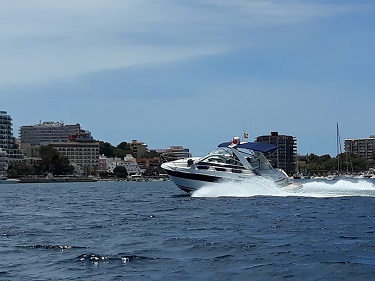 John, who had first introduced us to the joys of Magaluf’s Blue Bar, had remained living on Mallorca after his wife, Val, died shortly after our first visit. He had replaced his sailing boat SV Seize the Day with a lovely motor boat, MV Andiamo. We had a quick spin around the bay

and enjoyed a reunion with our favourite salty sea dog, Oscar. 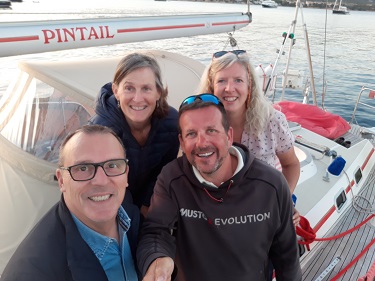 Another night we were reunited with Fiona and Fernando, some of Pintail’s original crew who live just around the corner. It is always so good to see them and we never tire of hearing their own tales of their adventures on board. Fiona made us some homemade, traditional Mallorcan coca de verduras, a type of pizza with a base made with beer. No evidence of the coca remains because we munched it all down!

It was wonderful to be able to catch up with everyone and we could have lingered longer in Palmanova Bay to hang out more with them all but we had another, as yet undiscovered (by us) island and another reunion in our sights (and I was still determined to make it to Almerimar in time to fly back to the UK for my friend Mike’s wedding in June).

2 thoughts on “Back to the Balearics”