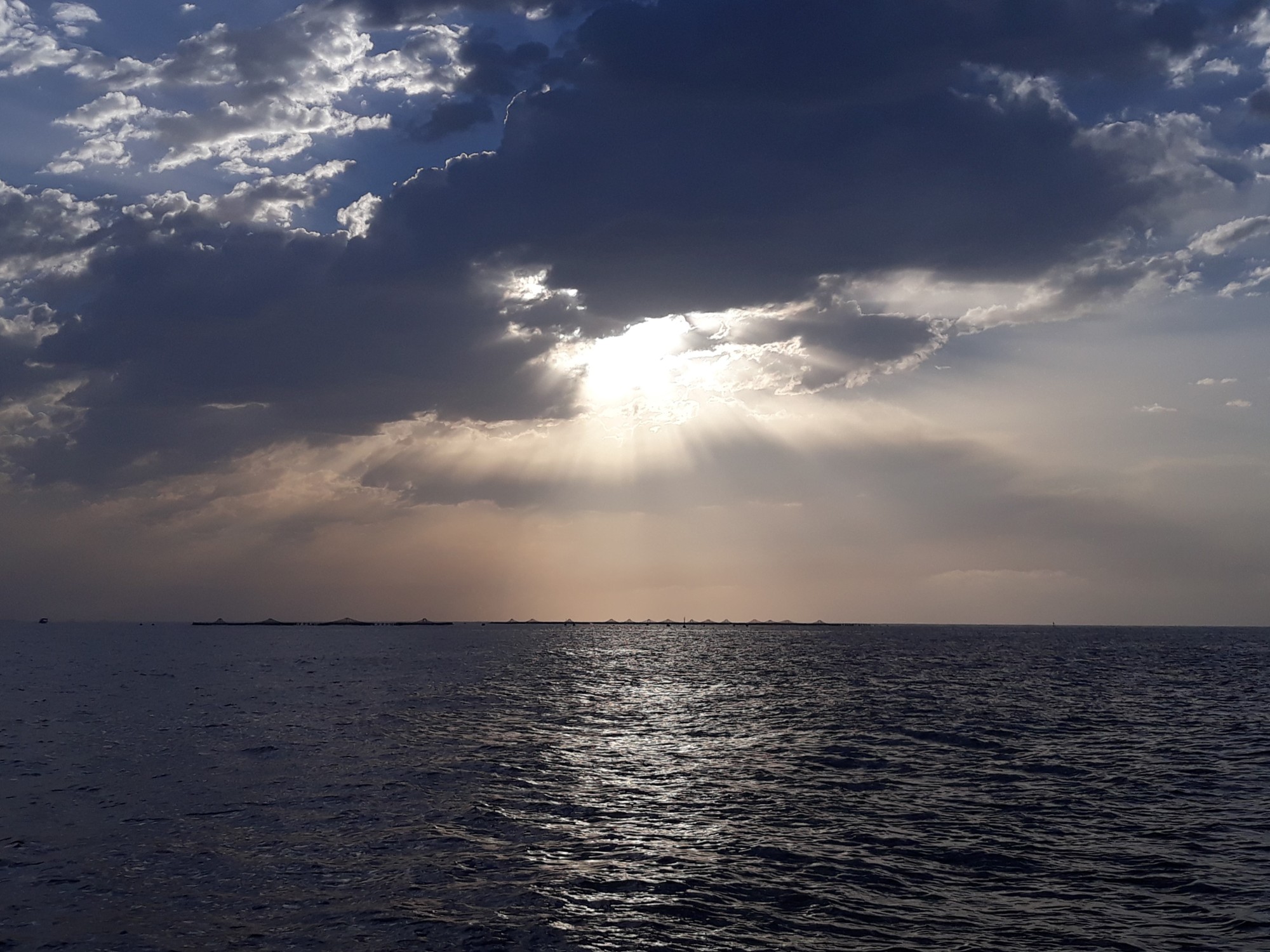 Wow, this all seems like a long time ago (and a different world away) but after what has turned out to be a longer break from Pintail than we planned and a long trip over land in Australia, our thoughts, if not our bodies, are back with Pintail in the Mediterranean and what better way to kickstart this blog again than completing our circumnavigation of this tideless sea.

After a Spring spent cruising through Tunisia, Sardinia, Corsica, the French Riveria and northern Spain we had spent a lovely time catching up with friends in the Balearics but it was time to leave beautiful Formentera and head back to the Spanish mainland… 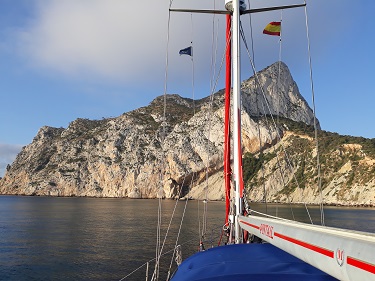 Do not be deceived by these photos of the anchorage behind Penon de Ifrach, the mini Rock of Gibraltar at Calpe. After a long day at sea and with the wind increasing we approached it in growing darkness. Another yacht was already anchored and rocking noticeably in the swell. We had a dilemma. The anchorage protected us from the wind raging on the other side of the rock but not from the swell. As it was getting late we decided to wait. Pintail rocked and rolled wildly most of the night as we tried to sleep but didn’t. It will go down as one of our worst nights at anchor. By morning of course the sea was flat calm and all innocent looking!

In that calm we motored round into the marina at Calpe and re-familiarised ourselves with the town we had first visited on our way into the Med, a town so dominated by the rock. We remember it fondly for that rock and its flamingos.

Time in Calpe meant more time to spend with Carol and Roger and they kindly invited us up to see them at their home in the hills behind the town in Benissa. Their wonderfully shady and open house is full of evidence of their love of sailing and the adventures they have had at sea 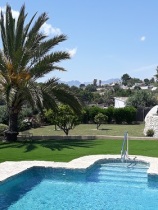 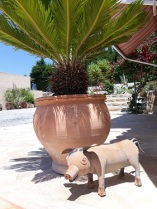 and despite the dry climate, Carol works hard to keep the lovely garden in bloom.

We found a slippery visitor in the shed and made a hasty retreat!

Roger took us for a drive into the nearby mountains and for lunch at a brilliant restaurant with a simple but wonderful menu of local produce accompanied by live music. 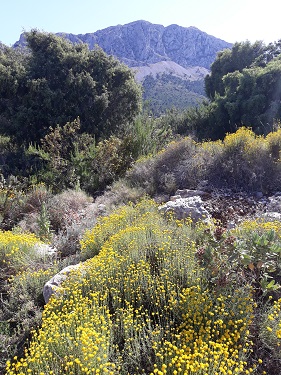 The drive continued through the mountains until we reached the top and were rewarded with views back down to the sea and that huge rock. 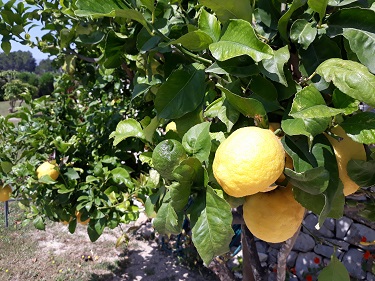 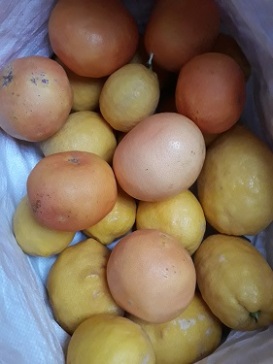 Our time with Carol and Roger over, they sent us off with a bag of homegrown lemons and grapefruits enormous enough to keep scurvy away for weeks to come on board!

And with Roger on our shoulder (or at least on the end of What’s App) we got braver in our sailing from Calpe. To date we have not flown our beautiful cruising chute without a third pair of hands on board but as we left Calpe conditions were perfect and we couldn’t let Roger down! After the usual tangle of sheets (one day we’ll get them set up right first time) she flew and we didn’t take her down until we approached our anchorage at the end of the day. 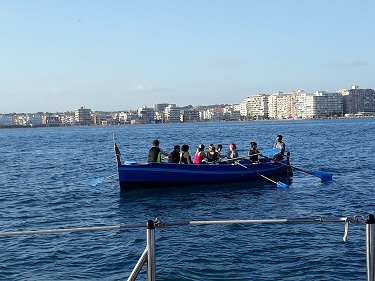 That night we had hoped to anchor off Isola Tabarca, a former pirate stronghold only two miles off the mainland. Charts and pilot books said anchoring was prohibited in this nature reserve area but our other sources said it was tolerated so we made our approach to the northern side of the island. A big motor yacht was anchored off the small harbour which saw a steady stream of ferries and trip boats. But we were not the only boat approaching the island. We slowed down as we watched a Guardia Civil boat creep up on the motor yacht. It looked like tonight we were not going to get away with anchoring off this pirate island. Over this tiny low lying land we could see the masts of other yachts in the anchorage in the south. We wondered if the Guardia Civil would catch up with them too and as southerly winds were forecast we headed instead for the rather open anchorage in the shallow water off Santa Pola. Completely alone and seemingly far from the beach due to the depths we still managed to have parked ourselves on this rowing team’s training course! 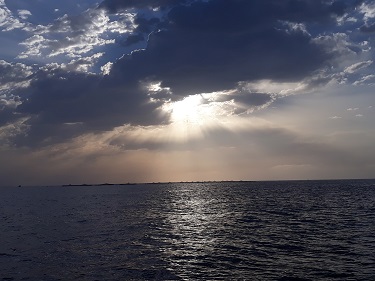 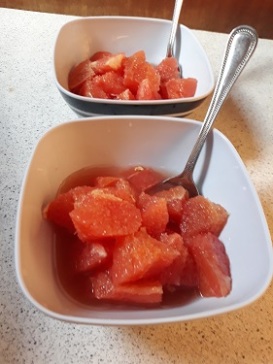 After a short sunrise motor with the fishermen, fuelled by Carol’s fresh grapefruit, we went into Torrevieja. We had been here before too but Marina Internacional was closed to visitors for major work so we went into Marina Salinas on the other side of the harbour. Not for the first time we found ourselves amongst the big motor boats and next to a British couple who had just taken ownership of a 60ft Sunseeker. They later told us they had only had it a week. No wonder they looked on so anxiously as we reversed in alongside them! 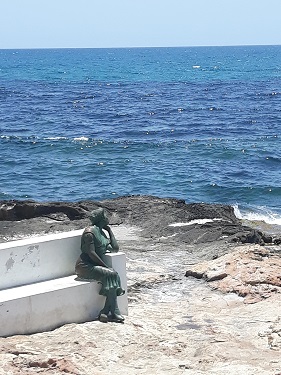 Summer season was kicking off in the town and the discos pumped out their tunes until the early hours. A good weather window meant unfortunately we could not stay and throw any shapes alongside the young and beautiful. We did have time for a sea front walk to reacquaint ourselves with the fishermen’s wives on the sea front.

Taking advantage of some stronger easterly winds, and buoyed by Roger’s encouragement, we set off towards one of our favourite ports of call of our journey into the Med, Cartagena. With 25 to 30 knots of wind on the stern quarter the swell was quite big but the sail was fast and comfortable. As we turned around the cape south of Mar Menor we were dead downwind. Carefully clipped on to the lifelines as Pintail rode up and down the swell we both headed to the mast to get the pole out. With wind and swell behind us the sail to Cartagena was lovely and smooth even in the strong wind. We arrived in the bay outside Cartagena at about 3pm with the wind still up at 30+knots. We hoped that the harbour would offer protection but in vain. Inside, the gusts just seemed to get stronger

but Stefan got Pintail safely onto the wall outside the office. We waited until it was nice and calm again the following morning before moving to a proper berth. 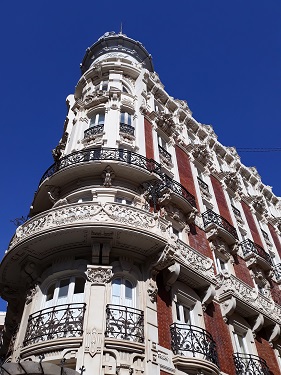 We fell in love with Cartegena the first time we visited in early 2017 and were glad to revisit its landmarks whilst we waited for the wind to turn from the east so we could continue our journey.

Whilst waiting I used some of Carol’s lemons to make some lemon syrup. Diluted with water and kept in the fridge this kept us hydrated in the rising heat.

arriving in Almerimar at about 7.30am where we waited for the office to open watching the swallows fly around the tower and where Pintail was destined to spend quite a lot of time as our plans took a change to the left field…

One thought on “Completing our Mediterranean circumnavigation”