Sicily was to be our last stop in Italy and where Martin joined us for our crossing to Greece. In good time for his arrival we found ourselves in Catania with a week to explore our last Italian island for a while.

Having been unable to find a berth on the yacht pontoons in the harbour we had booked Pintail into Nautica Glem, a park and launch for small motor boats with just one pontoon in the industrial harbour. Her tall mast stuck out like a sore thumb and as liveaboards we were something of a novelty to them but it was safe and secure. They also had a brilliant chandlery where Stefan was served espresso whilst ordering a replacement for our broken bilge pump (1). We also had a view of smoking Mount Etna from our berth! 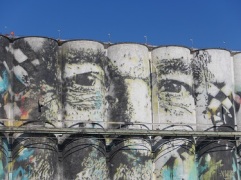 Even the long, dusty walk through the docks into the city was brightened by these murals on the grain stores.

Catania seems defined by its place in the shadow of the volcano. It was pretty much obliterated by the eruption of 1669. 18,000 of the city’s 20,000 population died and the end of the lava flow skirts the city where it meets the sea. Many of the city’s buildings were rebuilt using the basalt rock from the eruption. All the roads are paved in black. 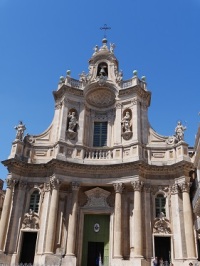 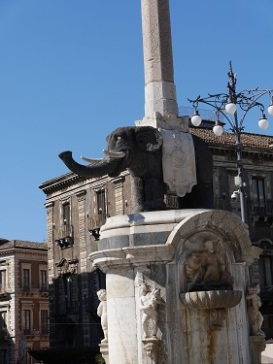 Despite its perilous position, there is an ostentatiousness to Catania’s public buildings and a quirkiness to a city with a lava elephant as the centre piece of its main square. It even has the obligatory Roman amphitheatre. 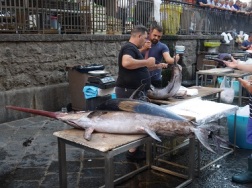 But it is mostly a gritty, often grimy, city. Most of its buildings unloved, if not derelict, as if just waiting for another eruption to take them. The smelly, bloody fish market provides entertainment as well as employment for many. We sat having a raw fish lunch watching the market pack up – my first taste of tuna and swordfish. I passed on the oysters!

On the Sunday we stumbled across an antique market in the railway arches. 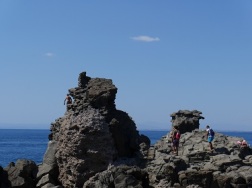 We took the bus along the coast to Acireale where more lava from a much earlier eruption found its way into the sea. Legend, however, has it that these are the rocks that the Cyclops threw at Odysseus in retaliation for blinding him in his one eye. 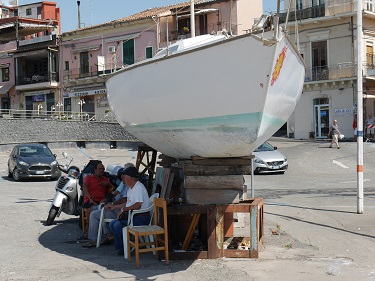 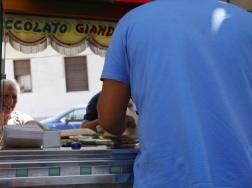 At this point in our Italian journey I had developed a one a day granita habit and Sicily was not helping the situation. From the Amalfi Coast southwards I had been satisfied with the sharp yet sweet lemon flavoured ice. The native almonds of Sicily however brought a new and more addictive flavour. Granita is so popular that ice cream vans for grown ups can be found on street corners, dishing up granita in brioche breakfasts. See how longingly I am looking at this one parked right at the bus stop! 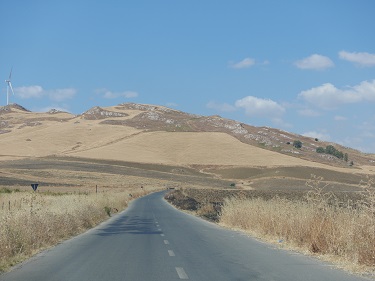 Inland we discovered a Sicily dedicated to arable farming, its fields parched yellow by the summer heat. 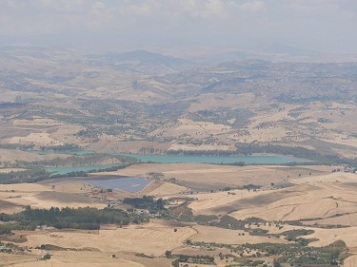 The colour palette continued in the hilltop town of Enna, known as Sicily’s bellybutton because of its position directly in the centre of the island.

Driving in Sicily was quite an experience. To date our roadtrips in Italy had found little evidence of stereotypically bad Italian driving. Sicily is clearly where it has all gone! Poor Stefan had to contend with cars pulling out in front of him without looking, cars rolling out of side turnings without stopping and at very low speeds, even one car reversing back onto a roundabout from the wrong side of the road. Parking habits were equally haphazard. Never mind parallel parking, perpendicular parking to the curb is the craze in Sicily, no matter how far the car sticks out into the road. Driving nerves frayed, we eventually, almost inevitably, came a cropper. In a narrow street with cars parked either side we bumped wing mirrors with a parked car. The older couple were very sweet about it and, despite the language barrier, we managed to swap details. The lovely man even found some tape to tape the hire car’s wing mirror back together! 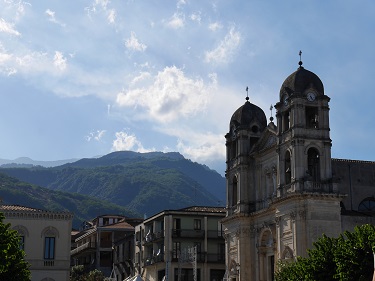 After all that excitement and after three months without a night off the boat we were in need of a little R and R and a bit of luxury so we checked ourselves into a spa hotel above the town of Zafferana Etnea on the slopes of Mount Etna. We might have got away from the boat but we still had a sea view from our panoramic balcony. An afternoon beside and in the pool followed by some time in the Jacuzzi and steam room and several overindulgent showers and we were squeakily clean! 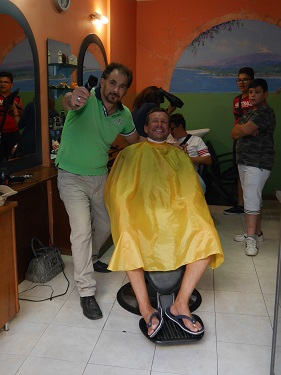 I got very excited about yet another delicious almond granita and these almost life size marzipan fruit which, despite the heat, reminded me of Christmas at home as a child.

Although we were booked on a tour of Mount Etna when Martin arrived the following day we couldn’t help but follow the road up from our hotel on our way home to take a first sneaky peek at the volcano’s lunar like landscape.

Proper exploration of Mount Etna’s craters and lava flows would, however, have to wait…

(1) the bilge pump is a very important bit of kit on Pintail – if water gets into the bilge (the bottom of the boat), the pump gets it out as quickly as possible. Without the pump we would be doing it by hand, much slower!