Our first impressions of both Cefalonia and Zakynthos were that they both looked a little bit familiar. Pastel painted houses, Venetian church towers, pizza restaurants and lots of Italian voices. Had we actually left Italy? Where were all the Doric columns and ancient buildings?

The large numbers of Italian tourists on both Cefalonia and Zakynthos makes sense given the islands’ close proximity to the Italian mainland but there is a much longer history to the Italian influence. From the 12th century the Napolitans and Venetians colonised the Ionian Islands for centuries. This also explained our confusion at the two interchangeable names for our second island stop, Zakynthos and Zante. Zante is the Italian name for Zakynthos. Napoleon had had a go at annexing the islands for France in 1797 and the British were there too, building roads for a time, but it is the Italian influence which dominates.

We had feared that Greece may not be able to provide our now required daily fix of coffee. From Portugal’s meia de leite, to Spain’s café con leche and Italy’s café macchiato, a coffee stop is now very much a part of our routine. We were therefore grateful for the Italians’ influence on this part of Greece and, with temperatures now in the high 30s, for the Greek fondness for iced coffee.

After the ancient mansions and streets of Italy, the modern, shiny new shops, bars and restaurants of Argostoli and Zakynthos Town were a bit of a surprise until we learnt the reason why. Cefalonia and Zakynthos were devastated by a huge earthquake in 1953 and the towns mostly rebuilt.

Similarities with Italy aside, we knew that cruising in Greece is going to be a very different experience to our experiences so far in the Med. We were looking forward to more opportunities to anchor but nervous about the paucity of safe, secure marinas. Pintail is set up to generate her own electricity and make her own water but Greece is going to her first proper test. 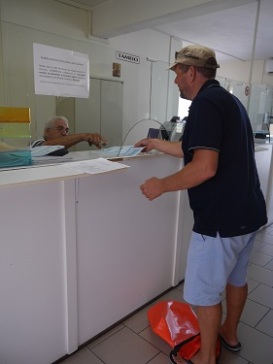 We also knew that to sail in Greek waters we first needed to get a licence called a DEPKA. We had read that obtaining this could be stereotypically Greek bureaucratic experience. Before we did anything else we visited the Port Police where Stefan filled in the necessary forms. To pay the fee we had to visit the tax office but it was closed that afternoon so we returned the next day. There we were directed to one office where the woman stamped the form. She directed us to another office to pay the fee and get another stamp. From there Stefan returned with the form duly stamped to the Port Police. Thinking this would be quick, Martin and I stopped to wait for him at a café nearby. He was gone a very long time. Our coffees were long drunk before he returned – still no DEPKA. The nice Port Police woman who we had spoken to the day before had been replaced by her grumpier, chain-smoking uncle. He told Stefan to visit another office, pay another fee and get another stamp before asking him to return in one hour. Another couple of coffees later Stefan returned with DEPKA in hand and we were ready to start exploring the Greek waters.

Something else we need to get used to in Greece is a different way of mooring. In the (near) absence of marinas, town quays are the alternative. We spent most of our time in Argostoli, Cefalonia at anchor but the night before Martin left us we had one night on the town quay. This was our first experience of stern to mooring using our anchor rather than the lazy lines of Italy. We were very glad to have Martin’s extra hands for throwing the lines ashore. I’m not sure how, while Stefan steers the boat backwards, I can be at the bow letting the anchor out and at the stern to get the lines ashore but I’m sure we’ll get the hang of it.

We were able to fill up with water on the town quay but there was no shore power so we had to rely on the batteries and generator for electricity. The upside however was that it had been five days since we left Sicily and still had paid absolutely nothing at all for mooring!

Filling up with diesel was different too. We didn’t take Pintail to the fuel station, it came to us! Denis, the diesel man, brought his little tanker to us on the quay. 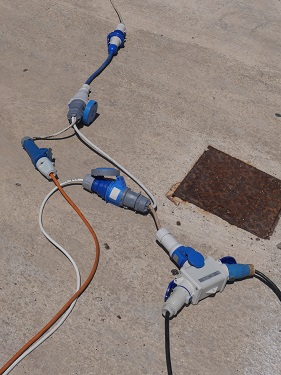 After a few days at anchor with our next lot of visitors including Our new shipmate we went into Zakynthos Town, again grateful to have more hands on deck to get lines ashore. The town quay there offered slightly more than Argostoli. There was water and electricity although this tangle of connections meant that the electricity tripped out and was off more than it was on when someone overloaded it. And there were no cleats or rings to tie lines up to. A concrete pillar did the job!

It might all seem a bit Heath Robinson but it seems to work. There is a real charm to the haphazardness and it just adds to the adventure of it all…

2 thoughts on “An Ionian introduction”