Crossing to Greece from Sicily was to be our second longest crossing since we crossed the Bay of Biscay in July last year – 260nm and about 48 hours. Unlike Biscay, however, this time we had crew! Our friend Martin flew out to join us in Sicily for the sail across.

I say sail but the forecast for the coming week was for incredibly light winds so it looked like Martin was actually going to experience some of the Mediterranean motoring we have by now become accustomed to!

Having spent the morning exploring Mount Etna, at 3.30pm we headed out of Catania harbour. By sunset the volcano gave us one last spectacle before it and Sicily disappeared into the darkness. We were really sad to be leaving Italy after three wonderful months there but also excited to be moving on to somewhere that promised to be very different – not least in the cost of mooring fees! Stefan was already dreaming of his first souvlaki.

Having Martin on board made so much difference to our crossing. He is very easy around the boat, knows what he is doing and that extra pair of hands really makes a difference. Our night watches with 3 of us were a revelation. Both nights I took the late shift to midnight which meant I got to sleep for 6 whole hours!

There is really very little to report from our crossing. We had little company  – a handful of distant takers and a couple of superyachts on the return journey to Italy. Way out at sea Martin and I spotted what looked like a fishing pot. It seemed entirely improbable when we were in some of the deepest water of the Mediterranean (about 3km deep). On closer inspection it turned out to be a beach ball and hitching a ride on top of it was a black tern! We had a fleeting visit from a pod of dolphins but apart from that the only other wildlife were a few dragonflies and a turtle. 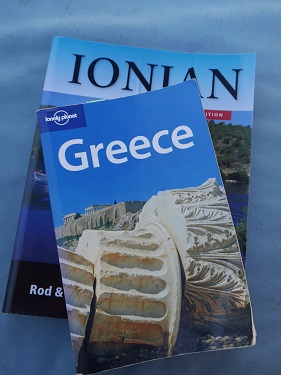 We passed our time reading and starting to plan our time in Greece. Martin had brought us out all the charts and pilot books we needed. Importantly he had also brought a new supply of Yorkshire Tea as stocks on board were getting very low.

There was some entertainment over the VHF radio, still lots of Italian voices and a German warship somewhere.

After dark Martin, who is a very keen astronomer, taught us about the solar system and the planets and stars we could see. On his very dark 12am to 3am watch he was able to see things he could not see from home.

When I woke up on the second night at 6am we finally had enough wind for sailing and Martin and I got the sails out. It only lasted about an hour before the wind disappeared again but it was nice to be without the engine noise for a while at least.

With Stefan and Martin asleep I had first sight of Greece in the early light and we made our way towards Cefalonia.

As we had been warned in the pilot book, the wind around the Ionian Islands increases from around midday and sure enough as we entered the bay at Argostoli at about 1pm it was about 20 knots. We made our way in safely and dropped the anchor just off the town quay ready to get to know Greece.

To celebrate our safe passage, that evening we headed ashore for our first Greek meal and, for Stefan, the first of many souvlakis! 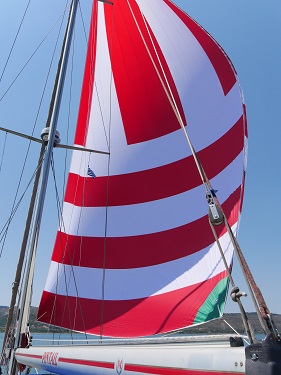 Before Martin left us a few days later we took advantage of the long bay that stretches up from Argostoli and the morning light winds to try out our cruising chute for the first time. In only 3 knots of wind we were able to get the boat moving at about 2 and a half knots.

Thank you, Martin, for joining us. We’re sorry there wasn’t more sailing. Maybe next time…