From the quaint calm of Kioni we left Ithaca for the island of Lefkas and the chaos of Sivota. We arrived mid morning and the anchorage was already very busy. We anchored close to other boats but happy enough that we wouldn’t bump into anyone. Throughout the day more and more yachts piled in, anchoring very close indeed to everyone else. Cross words and strong glares were exchanged. By evening a strong wind had started to blow into the bay. Whilst Pintail’s anchor stayed nicely in the mud other yachts started dragging and we sat watching anxiously, worrying we might be hit. We watched a couple of near misses between others and the frustration of those trying desperately to get their anchors to hold again. Many gave up and left in search of somewhere else.

With storms forecast and an already darkening sky we didn’t fancy our chances of not being hit a second night in Sivota. But where to go? We read contrasting reports about how secure the bay at Vlikho is in strong winds. On paper the almost enclosed and shallow bay with mud on the bottom would be perfect but then we read about the storm of 2011. A freak weather event saw hurricane force winds funnel through the bay. It lasted only 10 minutes but capsized and sunk a number of boats. When we entered the bay the number of other boats at anchor suggested that they like us believed that such lightening was unlikely to strike twice.

However, surrounded by high mountains Vlikho also has a reputation for its thunderstorms and, given that it looked like this when we arrived, just to be on the safe side we anchored as close as we could to the tallest mast in the anchorage! And then we waited for the storm to come.

On our first night we watched the rain descend the mountain into the anchorage. It reminded us of being in Essex Marina listening to the rain all night on the deck above us. It was a relief to feel the rain on our skin after all the heat of the Greek summer and best of all Pintail got a good wash down!

The thunderstorm, however, did not arrive until the following night. Strangely not accompanied by either rain or wind, the thunder and lightening started just before midnight and we lay listening to it rumble closer. Occasionally we would doze off only to be awoken by a loud crack of thunder followed by bright flash. The storm came close, very close. A fork of lightening gave one last frightening crack very close by indeed before the storm moved away. It was definitely the closest we’ve been to a lightening strike but we survived Vlikho in a thunderstorm.

The strong wind that should have accompanied the storm turned up on our third night in the bay. By then we were very confident that Pintail’s anchor was well and truly stuck in the mud. The bay was busy but big and everyone was well spread out so we weren’t too worried about others dragging into us. For a windy night we slept remarkably well. 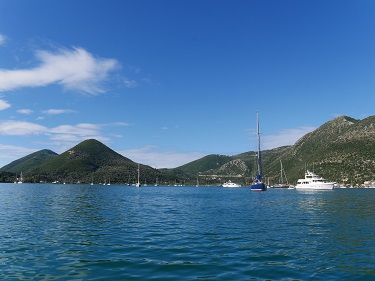 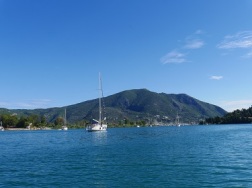 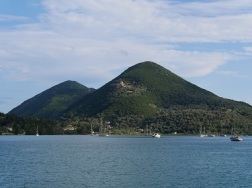 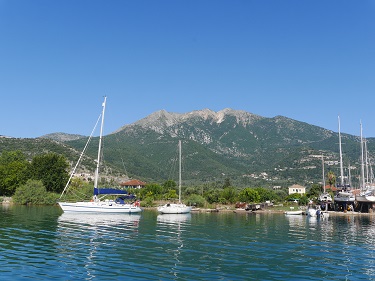 When the weather settled Vlikho became one of the those places you could easily linger in and so we did – for a whole 6 days. The setting was beautiful and we were only a short tender ride from Nidri which as a busy resort had everything we needed, including a Chinese restaurant!

In Nidri we were introduced to Wilhelm Doerpfeld, a German archaeologist who worked on the dig at Troy and who is celebrated by Lefkas for coming up with an alternative theory about where Odysseus called home. He believed that Homer’s description of Odysseus’ island was not Ithaca but actually Lefkas.

Whether or not he is right about Odysseus or not, he did find some real ancient ruins. Having held fast to my promise not to take Stefan to any more ruins, we simply glanced at the round houses uncovered on either side of the busy road from Vlikho and Nidri.

We took a walk in the rain around Tranquil Bay and found Doerpfeld’s grave. The flowers placed there not so long ago showed he is still a bit of a hero on Lefkas.

Another hero of Lefkas we found on the waterfront at Nidri was Aristotle Onassis. From the town you can see Skorpios, his private island. Since his death the island is in different hands and although we had as close a look as we could by tender anchoring or navigating anywhere close is prohibited. 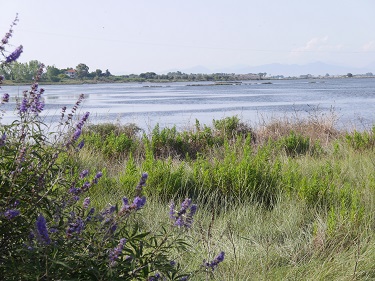 When we finally prised ourselves and Pintail’s anchor out of the mud at Vlikho we stopped for the night at the southern end of the Lefkas canal in Lygia. It was a really pretty spot close to the wetlands through which the canal is cut and still so green despite the heat. The wetlands promise sightings of pelicans and flamingos but our short walk around them gave rise to only sightings of one bright green lizard and a whole load of mosquitos! 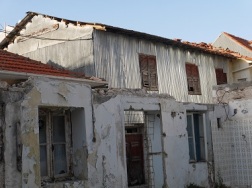 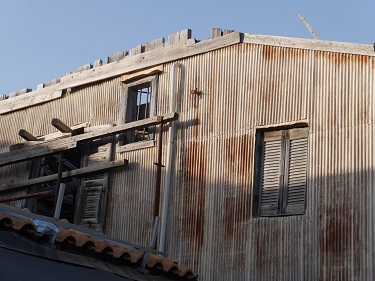 We took the tender up the canal to Lefkas Town to have a reconnoitre for taking Pintail through the following day. A quick walk around the main town revealed the island’s unique approach to earthquake proofing their buildings. Like Cefalonia and Ithaca, Lefkas felt the force of the 1953 earthquake but unlike those islands chose to reconstruct its buildings in corrugated iron from the first floor up. We guess the theory is that its more flexible than stone if caused to wobble again!

3 thoughts on “Lightening on Lefkas”