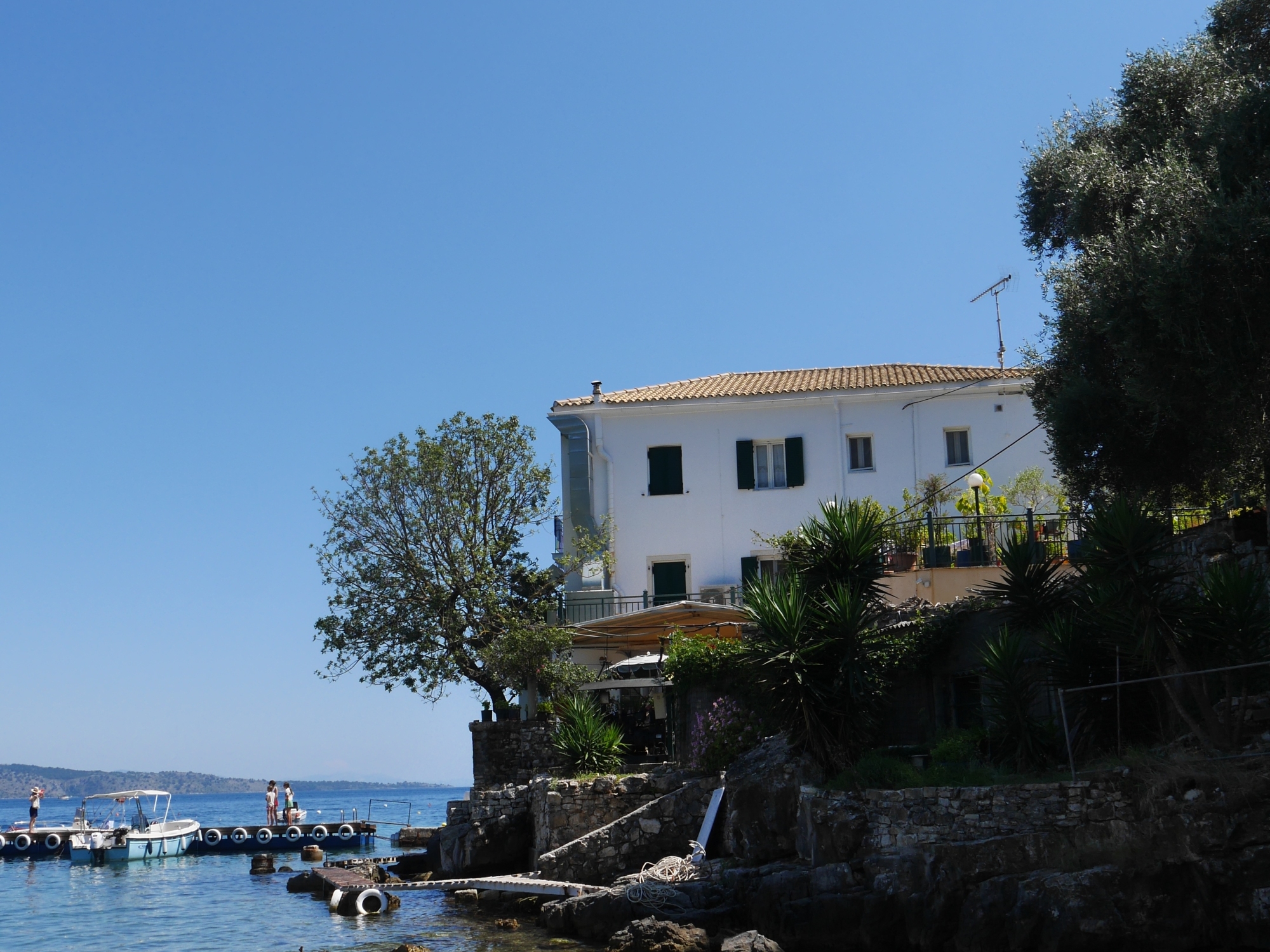 Our winter friends, Liz and Kevin, copied us a whole load of films and TV series before we left Crete and amongst them was the most recent ITV production of The Durrells, starring Keeley Hawes, which we had started watching as we got closer to Corfu. I remember reading Gerald Durrell’s My family and other animals and watching Brian Blessed’s Spiro in the 1980s TV adaptation. So it seemed only right that we should go in search of the Durrells in our short time on Corfu. 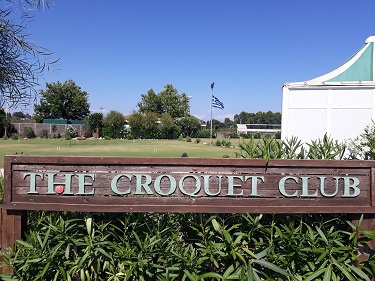 Evidence that the island has long been a favourite of the British was obvious as we walked out of the marina. A croquet club and cricket pitch greeted us at the entrance. We had just one day with a car on Corfu and were determined to see as much as we could. A friend of Stefan’s, Jonathan, had recommended we go to Paleokastritsa on the west coast. His previous recommendation of Pamukkale in Turkey had been an excellent one so we headed in that direction. 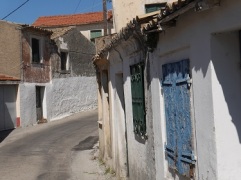 Before we got there we turned off the main road to climb up to the mountain village of Lakones. It’s so small and its road so narrow that there is a traffic light at each end allowing traffic through one way at a time with a 7 minute wait either side. 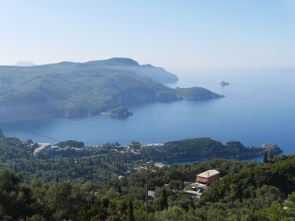 We stopped for breakfast on the balcony of the bakery overlooking Paleokastritsa and the terraced gardens of the village below. We have loved the green of the northern Ionian islands but Corfu is just so much greener again. It’s no wonder so many Brits have made it their second home. Driving through the shady trees really did remind us of home.

However, we did not find Paleokastritsa to be an oasis of peace and calm. Every single scrap of beach was occupied with umbrellas. Turns out that Jonathan had last been there 20 years ago when it was still a quiet little unspoilt harbour. Still, it was a good place to sit and have coffee whilst people watching.

Driving around Corfu we could not fail to notice the island’s current environmental crisis. The only landfill site on the island is full and has been declared illegal by the EU. Whilst political wranglings and environmental protests about the solution rumble on rubbish is piling up in the streets. It really is everywhere. We have been so conscious of how and where we dispose of our rubbish, especially on islands, and really hope Corfu finds a solution soon.

Next we headed into a Corfu Town where we walked from the New Fortress to the Old Fortress and back via the Old Town and around the sea front. 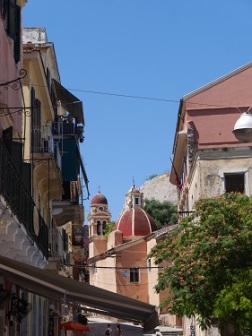 The Old Town reminded us a little of Naples (just without so much edginess) – narrow streets and high buildings, 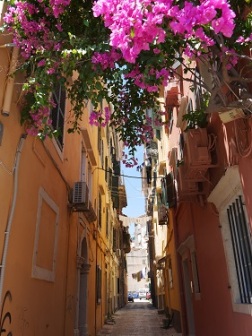 slightly crumbling but very much lived in. 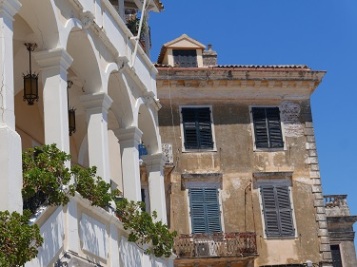 It was easy to see the French influence in the grand buildings along the sea front. 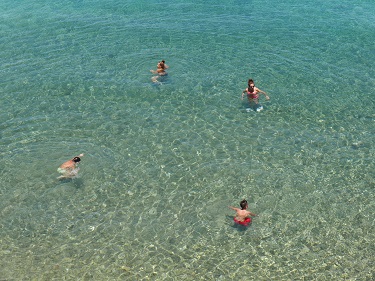 And along the sea front, in a pretty park overlooking the crystalline sea, we found Gerald Durrell with his bronze nose shining. So after a lunch of our last gyros in Greece, we decided to drive up to Kalami, the village the Durrells had made their home in the years before the Second World War. We hadn’t accounted for quite how mountainous northern Corfu was and it was a longer than expected, twisty, turny drive along the east coast to get there. 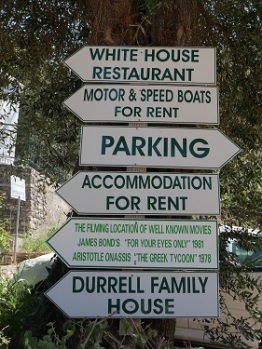 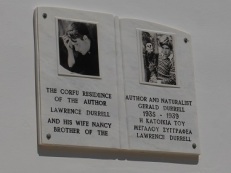 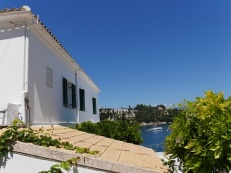 Kalami is a tiny village set around a bay full of yachts which makes a lot of its former inhabitants. The White House in which the Durrells lived dominates the harbour. It is now a fancy restaurant with accommodation above.

We came away with a copy of Lawrence Durrell’s autobiography/Corfu travel guide, Prospero’s Cell (which we hoped would make up for our short time on the island) and a bag of very expensive but delicious peaches that we were press ganged into buying by a local woman who no doubt does very good business from unsuspecting tourists on the Durrell trail.

The following day we made the same journey north but this time by sea and got a great view of Corfu’s highest peak and a better understanding of why the drive had taken quite so long. The coastline continued to drip greenery right down to the sea. 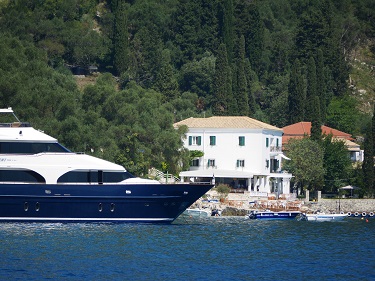 We had another view of the White House from the sea on our way. 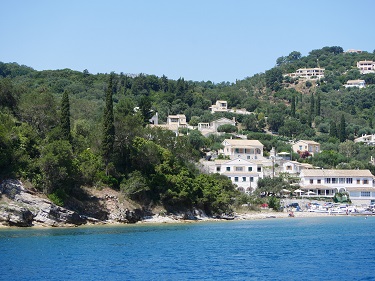 We had picked an apt anchorage for our last stop in Greece – Agios Stefanos, a bay on the north eastern tip of Corfu. It was a quiet, pretty spot surrounded by the island’s ubiquitous greenery in clear blue water. 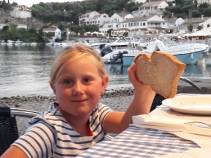 Serendipitously we were able to spend our last night in Greece with a lovely family we know from back home. Stefan is godfather to Charlotte and by the power of social media we had discovered that his co-godfather, James was on Corfu with his family. Not just that but staying walking distance from our anchorage. Not only was it lovely to have their company to celebrate our last night but we were treated to lessons in Guess Who? and Uno late into the night.

Thank you James, Shoonah, Lucy and Squeak for making our last night in Greece extra special.

From our anchorage at Agios Stefanos this is how close Albania was – just beyond the entrance to the bay. It was so close we could almost have swum across! We have had an incredible time in Greece but Albania really was calling us…

3 thoughts on “In the footsteps of the Durrells”