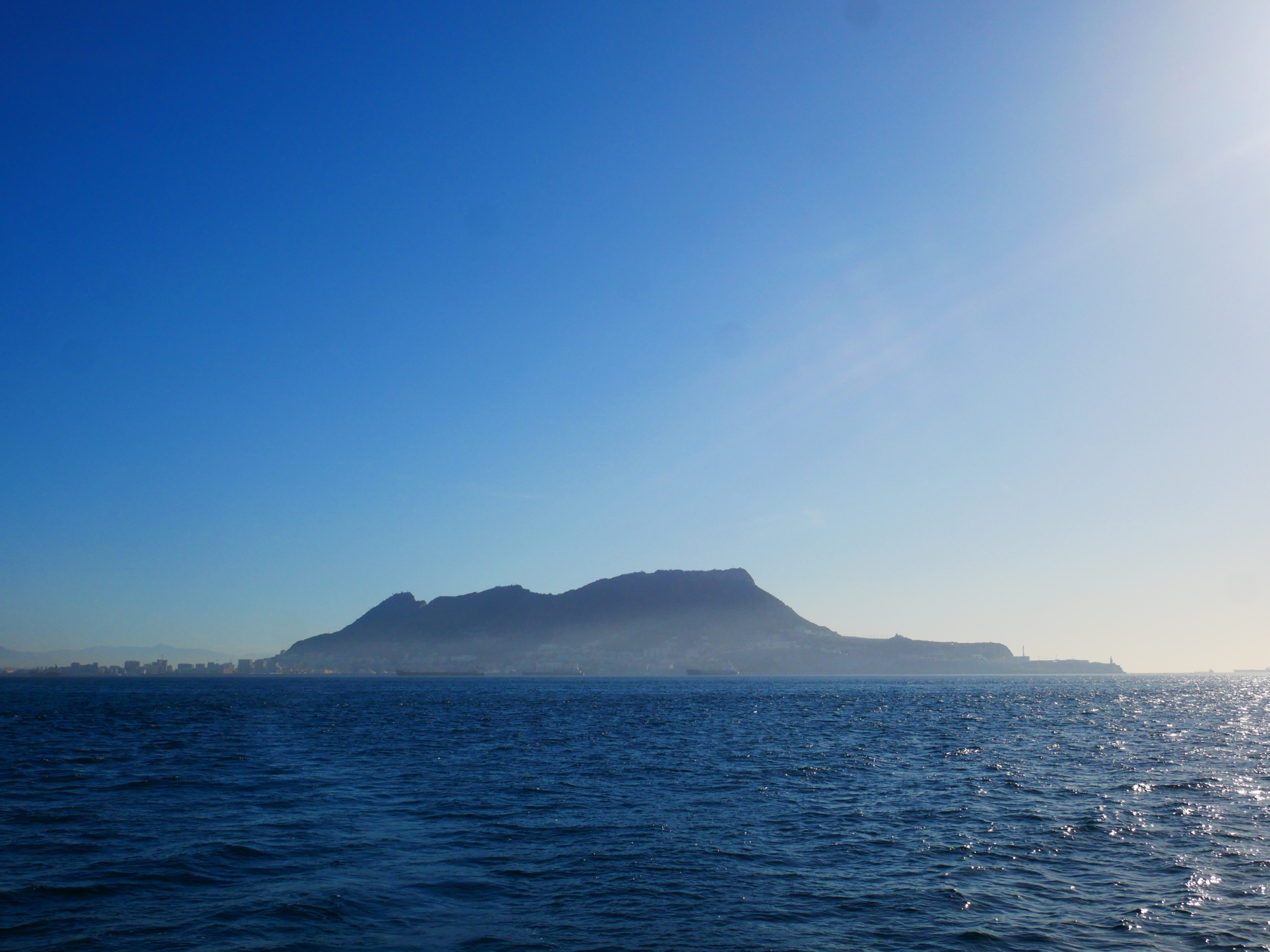 Trying to leave Gibraltar was hard for so many reasons. We had grown accustomed to its quirks and familiar with its streets and paths. We had grown comfortable and felt safe and happy in our berth in Queensway Quay Marina amongst friends. Our heads wanted to leave but our hearts were going to have to be dragged out of there. We had rather randomly set ourselves a date to leave of 10 May and set about starting to plan our onward passage.

Nature wasn’t going to make it easy. We were going to have to tackle those tides and currents that push and pull in and out of the Mediterranean through the narrow Strait and round the capes. We were going to have to wait for the wind to be just right, blowing easterly but not too strong to get safely round Tarifa. And just to add to those hazards we had just heard of another very recent orca attack on a sailing yacht just off Barbate. SV Calista had sustained an apparently coordinated attack by a group of orcas, sustaining serious damage to their twin rudders and requiring a tow into La Linea. The news definitely made us nervous. The map of “interactions” drawn up by the Atlantic Orca Working Group showed that we would be sailing right through an area of very significant recent activity by these rudder chewing foes. There was nothing to do but remember the advice in case we bump into them and hope for the best.

Before we left we added an invitation to the Governor’s residence to our list of Gibraltar experiences. We stumbled across the Convent Open Day on one of our last trips to Main Street for last minute shopping and popped in for a nosey. The Governor is the Queen’s representative in Gibraltar, a post currently held by Sir David Steel.

The Convent has been home to Gibraltar’s Governor since 1728 but as a Franciscan convent dates back to 1531. It is a grand stately home with a beautiful oasis of a garden hidden right in the middle of the crowded town.

10 May came and went without a good weather window for leaving. So we had time for one last walk around the Rock while we waited for good wind. We enjoyed a last brunch of tostadas de tomate at the cafe at the Lighthouse before disappearing into the fog to walk around to Sandy Bay and beyond. On the way we bumped into friendly faces, my friend Maxine from Bootcamp walking her dog at Europa Point and the icon of the Rock herself, Chris, heading to a rather foggy beach at Catalan Bay. At Eastern Beach people were resolutely sunbathing in the fog! Better at the beach than out at sea though.

Finally wind forecast and tide times converged that would get us safely around Tarifa and on towards Portugal and we had run out of excuses. I dragged myself out of bed at 5.45am for one last Bootcamp with Raul followed by one last pilates class with Lucia. Stefan had one last climb of the Rock on his bike to double check conditions in the Strait. One thing is for sure, despite the global health emergency, we were leaving Gibraltar fitter than we had been in a long time and double jabbed to boot.

We had to say final farewells to some good, good friends who had seen us through our time in Gib. Thank you to the crews of SV Sunflower, SV Delite, SV Katface, SV Starlight of Dover, SV Big Al, SV What’s Next and SV Anahata for being the best marina neighbours. We hope to see you again somewhere out in the big blue but until then fair winds and following seas to you!

At 8.30am on 15 May, five days later than planned, and as soon as boom gate was opened, we slipped out of berth D36 at Queensway Quay and out into the Bay. Yvette, Derek, Helen and Phil were up to wave us off and Yvette even got the flag out! We had so many emotions disappearing again into adventures unknown – sadness at goodbyes to a place and people we had grown so very fond of, fear of encountering orcas, anxiety that we had calculated the tide right for Tarifa but generally a sense of relief and excitement at being back at sea and on our way.

Conditions were perfect as the sun rose over the Rock and we set the sails and started to leave the Pillars of Hercules behind us.

It was a frustrating but glorious passage. The tide remained stubbornly against us most of the way to Tarifa by which point we were motor sailing in 12 knots of wind at only 2.6 knots. We didn’t get any favourable tide until we passed the lighthouse and were making our way towards Barbate.

Bizarrely we had the company of lots of honeybees hitching a ride along the way. One rested on Stefan’s knee for a while to have a wash. It never ceases to amaze us how far off shore we find insects. We spotted a turtle and a spectacular jumping swordfish. Our joy at seeing the giant, long nosed fish was quickly followed by terror at what might be chasing it. But to our relief there was no sign of the orcas that are their main predator and we made it safely to Barbate where the red and white water tower instantly recalled memories of our last visit.

This time, however, we did not intend to land. We wanted to delay stamping ourselves into the Schengen zone as long as possible and avoid the over officious Spanish officials. So we tucked ourselves behind the tuna nets and just hang out at anchor until we have good wind to get us to Portimao. But anchoring in such an active fishing area meant a disturbed night as fishing boats rushed in and out of the harbour at all hours, rocking us less than gently out of sleep.

Tired, we made the decision to move round to Cabo Roche hoping for less bumps in the night. It seemed a good idea too to get around the shallow reefs of Cape Trafalgar in daylight. This time it was me who did the honours to Nelson, lowering our ensign as we passed the site of his great, last battle. Our brilliant decision turned a tad sour when we turned corner and into 20 knots of headwind. A bumpy motor into the wind and around more tuna nets found us in the relative calm of an anchorage outside the fishing harbour of Puerto de Conil where we could sit out a couple of nights before, hopefully more favourable wind to get us across the Bay of Cadiz to Portugal.

There we noticed how instantly we had shaken off our harbour habits. No longer were evenings spent down below with our eyes on the screen making the most of unrestricted access to Netflix. Suddenly we were comfortably back in the cockpit until sundown and to bed when the sun disappeared. Being away from the Rock meant we noticed we were also woken by the sun so much earlier.

Without the prospect of good wind to take us to Portugal we left Cabo Roche to head a bit further north to Cadiz from where we could get a better angle on the wind when it finally came. Not long after our early morning departure a thick fog descended. Suddenly the air was heavy with moisture and every sound magnified and directionless. With Stefan at the chart table watching the radar, I stayed at the helm picking our way between the coast and the reefs. At times like these we are so grateful for our navigation equipment. It was not, however, a good time to discover that 6 years after we last got stuck in the fog on our return leg from Dunkerque our fog horn had stopped working! After a long couple of hours the fog gave way and a beautiful fogbow heralded visibility.

We made it safely up to Cadiz but instead of going into one of our favourite Spanish city we headed across the bay to anchor at Rota. From there we could make out the skyline of the city whilst cosying up to the US warships next door at the American naval base. We enjoyed our calmest night at anchor in preparation for our night crossing to Portugal.

As we napped during the day before our 8pm departure, it dawned on us that we really had left the Mediterranean behind us and the sea that had been our home of the last four years. We were also leaving Spain without so much as an adios, hasta luego and despite our love/hate relationship with the country that made us just a little bit sad too…

One thought on “Saying goodbye to the Mediterranean”