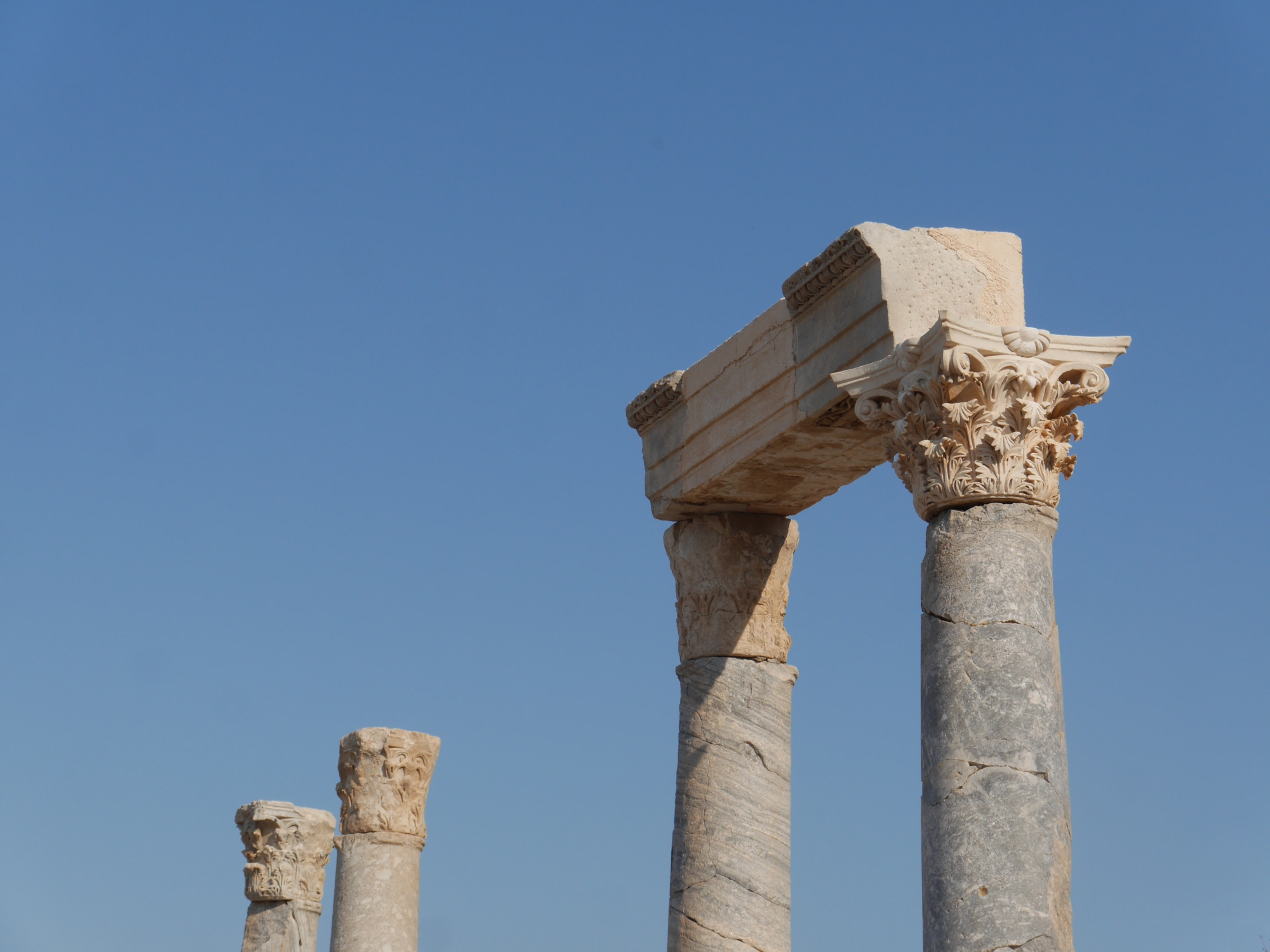 Before leaving Datça for Knidos we dinghied over for a final coffee and farewell with Oda, Onno and Jasper. We found Oda feeling very sorry for herself, having been up all night being sick. It couldn’t be food poisoning, we all thought. We had all eaten the same things and the rest of us were feeling fine. Perhaps she had picked up a bug swallowing some sea water? We said a final “boo” to Jasper and heavy-heartedly parted company.

It was a short sail to the very tip of the Datça peninsular to Knidos, an anchorage legendary since ancient times as providing protection from the unpredictable winds around there and as the dramatic location of a Dorian city. It was another place that St Paul had stopped off on his way to Rome. The shallow enclosed bay had calm water and a pontoon to tie up to. We decided to tie up instead of anchoring. And were glad we did!

It turned out it could be food poisoning that Oda had! That night I went down with the sickness and a few hours later Stefan too. We messaged Oda who confirmed that although she was feeling much better, Onno was now sick. That wonderful meze turned out to be not so wonderful after all!

For 24 hours we were good for nothing more than lying in bed and were glad not to be sailing or at anchor. Neither of us had enough energy for that and it made us realise quite how vulnerable we are just being two of us. We had feared one of us getting sick or incapacitated. We had never thought it might happen to both of us at the same time! 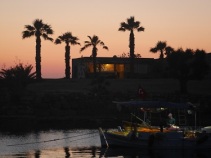 Our one night in Knidos turned into two but there are worse places to ride out food poisoning than amongst the fisher folk of Knidos.

Twenty four hours later we were feeling better enough to take a closer look at the ruins just metres from the boat. We even snuck in before the ticket office opened! 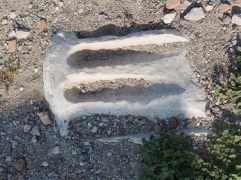 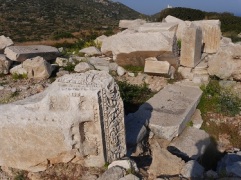 The ruins of the city are only partially excavated and fragments of buildings dating back to 400BC seem to lie just where they fell. An ancient sundial no longer tells the time. 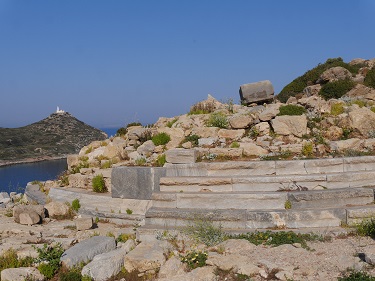 Knidos was famous as having the largest free standing statue of Aphrodite in its round temple. Also the first naked statue of a woman, she was said to bring good luck to seafarers. Of course the statue is long gone but I climbed up to what remains of the temple – a circular base – hoping some of her luck would still rub off. Lower down beside the water is the smaller of Knidos’ two theatres. 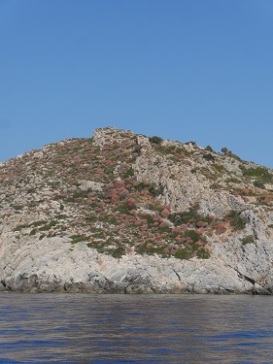 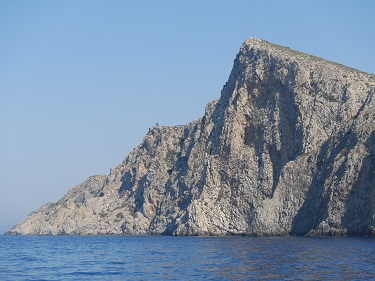 With most of our energy returned we felt good enough to carry on and left Knidos after our early morning visit to the city. The end of the Datça peninsular was pretty with pinky red bushes and its cliff reminded us of a smaller version of the Rock of Gibraltar. 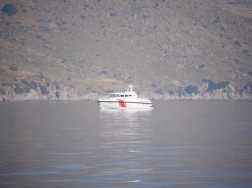 Since Fethiye the islands of Greece had been clearly visible as we made our way up the coast but here at the ends of the Datça and Bodrum peninsulars the islands of Simi and Kos are only a very few miles away. We could clearly see Simi’s hora and Kos’ dramatic southern coastline clearly. Having checked out of Greece and into Turkey we had to stay on the Turkish side of the straits between them, despite this meaning a less than direct sailing route. Coastguard boats from both countries patrol the border fiercely and we regularly heard stern warnings over the radio boats which strayed the wrong side. Watch towers along the Turkish coastline also speak of the tetchiness of the relationship between the two countries.

Good winds and a fine sail, as well as the border issue, made us change our plan not to stop at Bodrum. (We intended to visit later by car.) Instead of beating into the wind to get round the peninsular we sailed on passed the windmills and in to the bay at Bodrum, anchoring near the castle. Those crusader knights clearly had the builders in. It was clad in scaffolding! 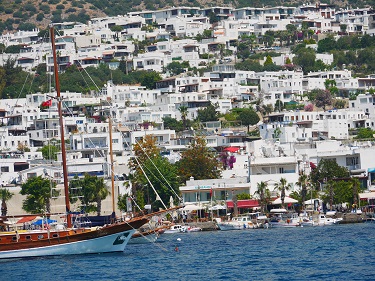 Bodrum was as we expected, a busy holiday resort. The beaches were filling up and the anchorage full of big boats. 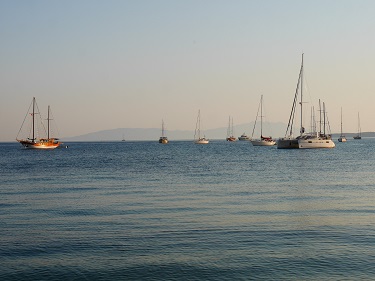 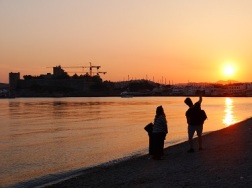 After a brief look around the touristy streets of Bodrum (if you need fake t-shirts, handbags, trainers, anything, we report they are all available here!) we watched sundown from the beach with Darren from SV Amazing who we had met in Bozburun. 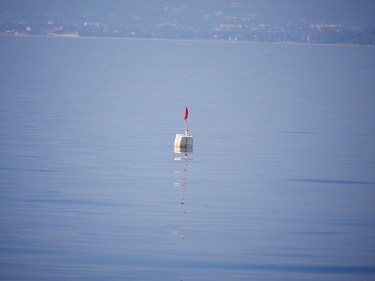 Leaving Bodrum early the next morning we encountered our first fishing pots since Italy and suddenly memories of the Atlantic coast of Portugal came flooding back. Luckily there were only about 6, not hundreds this time. The fishing must have been good though as the cormorants were out in force. 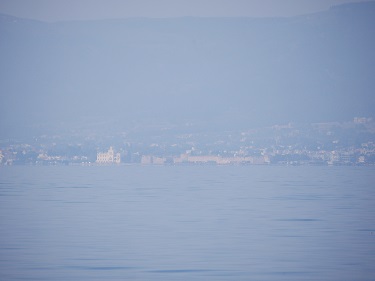 Kos still being so close we got a view of its crusader castle as we passed the main town and we encountered the first of Greece’s ferries. We had not missed having to dodge ferries whilst in Turkey. 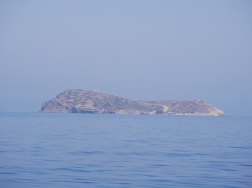 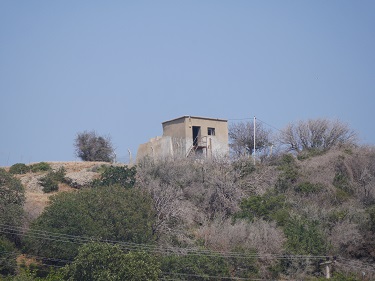 Heading north we started to pass some of the Aegean islands whose sovereignty remains a bone of some considerable contension between Greece and Turkey. In 1996 someone planted a Greek flag on one of them sparking near war, a Turkish commando landing and the hushed up deaths of three Greek military helicopter personnel. Whilst we were in Turkey a Greek fighter plane crashed in an apparent dog fight with a Turkish plane and only a week before we got to Didim another Greek flag was planted on an islet off its coast. So we didn’t need the constantly patrolling coastguard boats and watch towers to remind us how current or serious these tensions are. 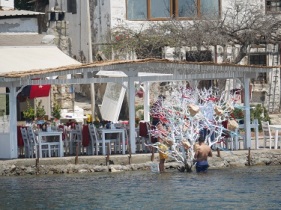 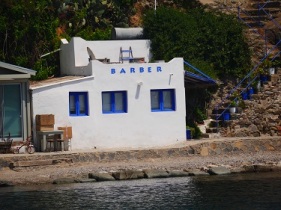 We broke our journey to Didim again with a night in the anchorage at Gümüşlük, a pretty little place lined with colourful restaurants and a barbers to visit on your way down from the mosque.

We thought the anchorage might empty out by night fall as it was a Sunday, and surely these people had work to go to in the morning, but no, in fact more squeezed in before dark and we had very little room indeed. 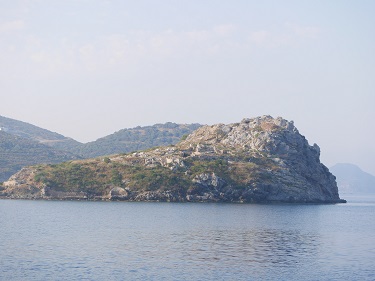 It was another anchorage surrounded by ancient ruins. Rabbit Island at the entrance to the bay was once part of the Carian city of Myndos. The unexcavated buildings were just about visible and the causeway joining it to the mainland was accessible by paddling. Crossing it was a popular Sunday activity. 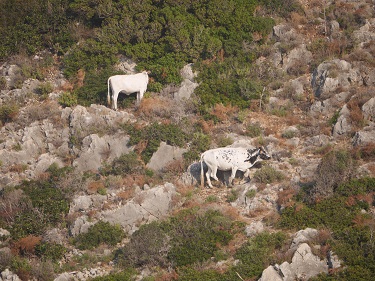 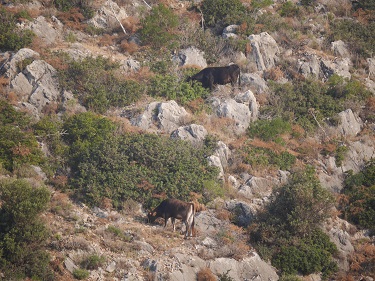 Leaving the anchorage the next morning we were surprised to see cows not goats on the hillside.

It was then a short passage to our final port of call in Turkey – Didim Marina with its posh pool and peacocks, the perfect base for our last two road trips in this wonderful country…